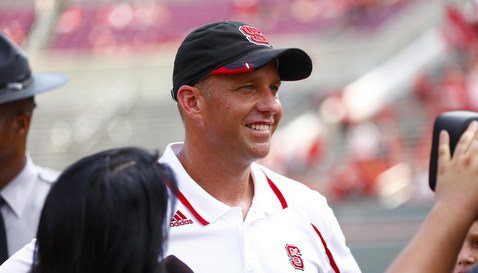 N.C. State fired head coach Tom O’Brien following the 2012 season, citing several seasons of mediocrity. Brought on board was Doeren, who had taken Northern Illinois to a BCS game, with the hopes that he could turn the Wolfpack around sooner rather than later.

However, the Pack is looking to turn things around again after going 3-9, dropping the final seven games and failing to win an ACC game for the first time since 1959.

The 2014 season will feature a lot of younger players getting significant playing time.

Leading the way will be redshirt junior quarterback Jacoby Brissett, a former 4-star prospect who played his first two seasons at Florida. He transferred following the 2012 season, and sat out last season under NCAA rules. He was named the Wolfpack’s Scout Team Offensive Player of the Year.

“Well, it was a great developmental year for him. He's done some things to his body that I know he feels have helped him,” Doeren said of Brissett. “Mentally I think it gave him a year to get in a good place. He went through some things before he came here that kind of got him off center, and I think he's in a really good place mentally and spiritually now, and it's his team the way he wanted it, and I'm excited to see him progress.

“He needs a lot of game time now, but last year, just to watch him lead and compete in practice every day and how serious he takes his performance and the game itself is exciting, and now it's just a matter of getting a guy that has a lot of accolades just back into it because he didn't play a lot at Florida. He played some as a freshman and really none as a sophomore, and then he sat last year and just played on the scout team.”

Doeren said much of fall camp will be spent developing depth across the board.

“Offensively ,Jacoby Brissett is our quarterback and had a nice day in the spring game, threw for about 370, and so now our big thing will be developing the next guy with Garrett Latham coming back, who had some minutes for us last year, and incoming freshman Jalan McClendon also returning to us,” he said. “Our offensive line, we'll get back Rob Crisp, who missed 10 of our games last year, so that'll help us once we get him in shape ready to play. We had nine of our signees already in this semester, so to add some guys in competitively, some of those guys have already started to help us in areas that we needed, some just playmakers but competition and depth.

“Look forward to getting the rest of that class here and adding to the formula of competition, which is the biggest thing. I think our team lacked depth at a lot of position groups last year and couldn't sustain injuries. I feel like after the class we just had and the redshirt class, at least we'll have competitive depth, albeit young, but they'll be guys that are battling for playing time, which will be fun as a coach to see that transpire here as we get through summer and into the fall.”

Doeren said that one surprise coming out of the spring was how well his tailbacks played and the consistency shown by other position groups.

“Tony Creecy, Matt Dayes and Shad Thornton all had a very solid spring. Ball security was very good,” he said. “At quarterback there was just a consistency – from both guys, making good decisions, putting the ball where it needed to be. At receiver, probably a position that's still pretty young. Bo Hines, a true freshman that graduated early was probably the most consistent receiver for us in the spring. Brian Underwood had a very good finish, but consistently Bo, was. I was very happy with the disruption and daily work of our defensive line. Had a few seniors that have improved themselves at linebacker. Rodman Noel is a guy that was a reserve a year ago that really had a good spring, and in the secondary we're playing a lot of different coverage techniques than we did a year ago, so just to see the progress with that, those would be the things that stood out.”