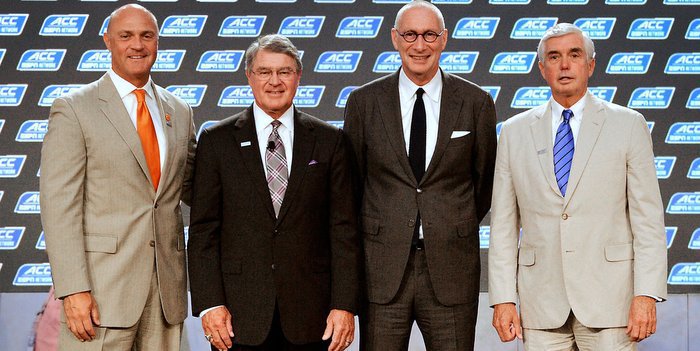 The ACC is set to launch its own network in 2019

The ACC is riding high in the college athletics landscape, with the national champions in football and men’s basketball and the launch of the ACC Network still on track for 2019.

The ACC has never been healthier, according to ACC Commissioner John Swofford, but a report released by the USA Today Friday shows that conference revenues dropped by $30 million in 2016. That means that the 2016 revenue per school for the ACC is the lowest among all Power Five conferences at just $26.6 million per school.

The reasons for the decline are myriad. In this decade, the conference added three new schools to the conference landscape (Louisville, Pitt and Syracuse), reaped the benefits of the debut of the College Football Playoff and the $31 million exit-fee settlement it received in connection with Maryland’s departure to the Big Ten.

In addition, the conference’s usual payout from the Orange Bowl dropped, which will occur every third year when that event becomes a CFP semifinal rather than a game set to feature the ACC champion.

There was good news for Clemson, however. Every school saw its conference distribution decline except for Clemson. Clemson’s share rose to a conference-leading $27.9 million thanks to back-to-back appearances in the College Football Playoff.

Schools receive an allowance from the conference for bowl game travel and tickets, and Clemson received money for College Football Playoff semifinal trips to Miami and Phoenix and National Championship appearances in Phoenix and Tampa.

However, help is on the way for the conference in the shape of the ACC Network. Speculation ran rampant last month after ESPN laid off hundreds of employees, leading many to wonder if the future of the network was in doubt.

According to Swofford, who spoke at the ACC meetings earlier this week, the Network is still on schedule and will add a big payday for all of the schools.

“We continue to have absolute complete assurances from (ESPN president) John Skipper directly and ESPN in terms of everything being full blast, so to speak, in terms of the channel,” Swofford said. “We spent a considerable amount of time here, in fact, with our partners from ESPN discussing aspects of that and the upcoming launch in 2019.

“Everything is completely on schedule with that.”

Swofford said he expects the ACC to trail for a few more years, but not for long.

“I’m very confident,” Swofford said. “That’s why we’re doing the channel. We fully expect a gap with particularly the Big 10 and the SEC for a couple of years. But that’s the very reason we’ve signed to do what we’re doing. We fully expect that gap will narrow considerably when we get the channel up and running.”