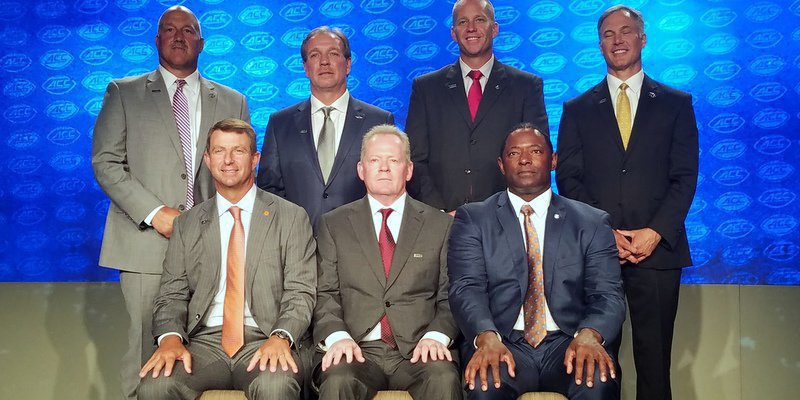 CHARLOTTE, NC – Football is back, with ACC Atlantic Division coaches and players taking center stage at the ACC Kickoff at The Westin in downtown Charlotte Thursday.

Clemson head coach Dabo Swinney and players Christian Wilkins and Tyrone Crowder will be part of the interviews later in the day, but we’ve heard plenty of interesting nuggets we will pass along until Clemson takes the stage.

*We will have a story about it later, but Louisville defensive back Jaire Alexander says the Cardinals are already thinking about Clemson. Alexander said Louisville feels like they could have won all three meetings, but he has a little extra incentive to win because of an incident that happened last year in Death Valley.

“The game had just ended, and I was walking off the field and Clemson fan got right up in my face and started jawing at me,” Alexander said. “I remember his face. I can tell you exactly what he looks like. I was hurting, and I was mad, and he gets up on me and starts dabbing. I will never forget that.”

*Lamar Jackson echoed his teammates sentiments saying he felt like they were good enough to beat Clemson last year. He said Louisville simply has to finish the game this year.

*Louisville head coach Bobby Petrino said the coaching staff is walking a fine line between making Jackson a better passer and trying not to limit his athleticism. Petrino went on to say that during spring practice they devoted some time to preparing Jackson for his future NFL career.

Petrino said they want to give college coaches more think about and will put Jackson under center to open up the offense more by making defense think about play-action passes.

*ESPN analyst Tom Luginbill told me (and we will once again have a full story later) that he thinks Hunter Johnson will end up as Clemson’s starting quarterback. Luginbill said he thinks Clemson’s coaches learned a lesson Deshaun Watson’s freshman year.

“I don’t know if Dabo will admit this or not, but if they had started Deshaun Watson against Georgia they would have beaten Georgia,” Luginbill said. “I think Kelly Bryant starts the first game, but Hunter Johnson will wind up as the starter.”

*Syracuse defender Zaire Franklin said he thinks Syracuse is the best home environment in the ACC, but Clemson’s Death Valley is right there with it.

“My freshman year we went to Clemson and it was night game,” Franklin said. “It was crazy, and the fans are right on top of you. I was standing next to my coach and I couldn’t hear him. Vic Beasley had like three sacks right off the bat. We played there last year but it wasn’t as crazy in the daytime.”

*Syracuse QB Eric Dungey on coming to the ACC Kickoff and hearing all about Clemson and Florida St.

“Yeah, I mean, like I said, just fires you up. Kind of makes me just want to go back and start working again,” Dungey said. “I’m going to. But it’s kind of -- you play with a chip on your shoulder. It’s kind of how it’s been the past couple years. I’m excited for next year. I think we’re going to surprise some people.”

“Yeah, I pulled for Clemson against Alabama,” Chubb said. “There is nothing in the world worse than an Alabama fan.”

Chubb said he thinks NC State has the best defensive line in the country, and the Pack have moved on after losing at Clemson in a heartbreaker last October.

“We try not to think about last year. It's a new year,” Chubb said. “We're striving to be the best that we can possibly be, on and off the field, and when you've got guys that are going to go out there and play their hearts out for each other and for one another, I just never know what's going to happen. I feel like if we all just continue to play for each other, like I said, then the sky's the limit for this team, and those close calls won't be close anymore, and those games that y'all say we should have won, I feel like those games are going to be won.”

Head coach Dave Doeren said he thinks about the Clemson game all the time.

“Oh, I think about every game. I think any time you have a game that really exaggerates the importance of one play, it helps your program because you can go to that and say, hey, when we work out today, guys, this last rep, it matters because every rep matters,” Doeren said. “Remember when, you can go right to one play in the game that changes the game. Everyone goes like this. So they know how important a finish to a rep is, whether it's a weight room rep, whether it's a running rep, whether it's a mental thing in a meeting room, a walk-through rep, but there is no rep in a football game that can't change the game. And when you have those tight games like that where it goes one way or the other, it's quick to point to a play and say, that could have changed it. And that helps your development and it helps your off-season, and I think it helps kind of hammer home the word finish, which is what it's all about. It's finishing plays, finishing games, finishing quarters, the whole deal.

“I think any obstacles that we've had in front of us has only made us stronger as a team, as a family.”