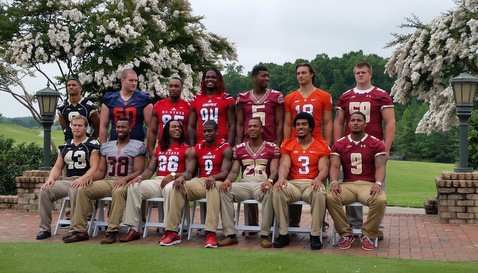 The players were competitive, even when taking photos

Now that the ACC Kickoff in Greensboro has concluded, it’s almost time to get down to the business of on-the-field football. During the long wait in the spring and summer, there are certain waypoints that let me know how far we are from the start of fall practice, and each one of those waypoints has been crossed off the list.

Once the bowl game is over, it begins with National Signing Day, continues into spring practice, then we have head coach Dabo Swinney

Dabo Swinney
Head Coach
View Full Profile ’s high school camp, supper at Swinney’s house in mid-July, Swinney’s media golf outing and the ACC Kickoff. That’s it – all of the waypoints have been reached, and now we await the start of fall practice next week.

Until then, let me give you some of highlights and lowlights of the Kickoff, which was held at the Grandover Resort in Greensboro. Rumor has it that it will be held at Pinehurst next year – it was there three years ago – and you can imagine my angst at having to visit the beautiful grounds at Pinehurst again.

As expected, the defending Heisman Trophy winner drew the biggest crowd of the session and surpassed the number of media that gathered around Jimbo Fisher, his head coach at Florida St. The bad part about all of that was that he shared a table with defensive back P.J. Williams and I don’t think Williams answered more than a few questions during the hour-long session. Meanwhile, a member of the Florida St. sports information department stood nearby, cringing and looking like he was about to have a stroke every time Winston opened his mouth.

To his credit, however, Winston was just his typical self. It’s obvious that Jameis Winston loves him some Jameis Winston, but he answered every question as truthfully as he could and didn’t back down from anyone. During the photo sessions, he was the leader of the pack and it was hard to get him to stand still long enough to have his picture taken. However, it was evident that some of the offensive linemen were not amused with his hijinks, and more than one rolled his eyes as the photographers endeavored to get Winston back on track. Like him or hate him, and call him confident or cocky, but he’s entertaining in a lot of ways. This season should be fun to watch just to see if he can sustain the success…

Chick-fil-A Bowl President Gary Stokan is a constant presence at the Kickoff, and he told me Monday afternoon that he was having several hundred chicken sandwiches delivered to the media and that the resulting scrum is usually pretty entertaining to watch. The sandwiches and cookies arrived around 3:30 p.m., and the media attacked the table like they hadn’t eaten in weeks. Keep in mind – the ACC treats the media right, and no one around there was starving, but I almost got trampled by one radio guy who was steaming toward the table, and several cookies got knocked over as writers scrambled out of the interview room at the mention of the word “free.” For the record, I did get a sandwich but stayed away from the cookie.

Speaking of Chick-fil-A, I am hearing that the Kickoff Classic is VERY interested in pairing Clemson against an SEC team to open the 2016 season. Clemson has two out of conference games on the schedule for 2-16 – Troy on Sept. 10th and South Carolina at the end of the season. Both of those games are at home, but I also heard that Clemson might not be interested in playing a neutral site game that season. I am going to try and catch up with Assistant AD Kyle Young this week and see what he has to say.

I almost felt sorry for the Syracuse head coach. Dabo Swinney had the usual 30-plus writers surrounding him during his session, and Jimbo Fisher probably had double that amount. Paul Johnson – who couldn’t stay away from Swinney’s table during the Sunday night supper – had around 10 at his table, a far cry from the throngs that surrounded him a few years ago. Shafer, however, had three very young writers sitting in front of him. That’s right, a whopping total of three. When I went over to ask him about his relationship with Swinney, he acted like he was happy for the intrusion. For the record, a nice guy and seems to give some honest answers, unlike some of the others who engage in coach speak from the moment they arrive.

We walked into the hotel Saturday night just as the bus was bringing the players back from a bowling outing. Stoudt and Beasley were already arguing about who was the best bowler – it looks like Stoudt had the upper hand – and the debate continued down the hall and into the player’s hospitality room, where Beasley beat Stoudt in a game of pool. The two sounded like they were always trying to one-up the other, and Beasley took it a step further Sunday when he was asked who was his favorite quarterback to sack. His answer: Cole Stoudt in practice.

It kind of took me by surprise when I heard a reporter mention running back Michael Dyer to Louisville head coach Bobby Petrino Monday. Dyer played in the national championship game for Auburn way back in 2010, and his career has taken a lot of twists and turns, and he will be eligible at Louisville this season. Once you do the math, it’s evident he still has eligibility, but it seems like he has been around forever.

Clemson fans love to give ACC Commissioner John Swofford a hard time, but the conference itself does a fantastic job with the media and making sure that the event runs smoothly. Several national writers said that the ACC media event is the best in the country, and one radio host told me that at the SEC event last week the conference charged him $85 for a table and $300 for internet access. That’s right - $300 just to be able to get online. The ACC is first class all the way, and if you need time with a coach or a player, they make sure it happens.

Best (and by best I mean dumb) Questions

The first one - some writer for Georgia leaned in to Vic Sunday and asked, "How much do you remember about those great Clemson-Georgia games of the 1980's?" Vic, who wasn't born until 1992, smiled and said, "Not much."

Then a beat writer for UNC (has to be a basketball guy) came over to Beasley and asked, "North Carolina visits Death Valley this season, and they run an up-tempo offense. How much of a problem do you think this will be and how do you think Clemson's defense will handle it since you aren't very familiar with it?" Again, Vic looked over and said, "I think we'll be alright."