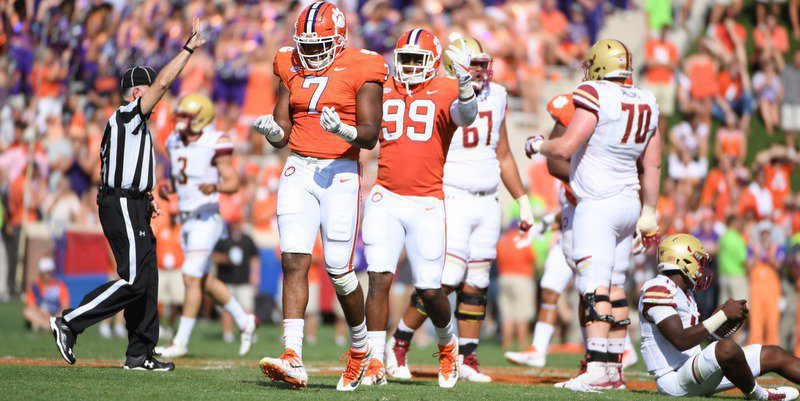 Clemson's defense did its part in the win over Boston College

It was sluggish and sloppy, but it was a win.

But it was sluggish and sloppy, and that just can’t be overlooked or disregarded.

For three quarters Saturday, Clemson’s players, especially the ones on offense, looked like they wanted to be anywhere but Memorial Stadium facing off with Boston College. Finally, in the fourth quarter, the offense came alive with 27 unanswered points for a 34-7 ACC win.

A 27-point win in conference play looks nice, but it was anything but for three quarters. Just remember, it was tied … at 7 … with Boston College.

That strong fourth quarter can’t wash away the issues of the first three.

Luckily for the Tigers, their defense was again dominant, and Clemson didn’t exactly face an offensive juggernaut in Boston College. That won’t always be the case, and Clemson’s offense has to play better than it did Saturday.

The offensive line was not good. There weren’t many holes for the running backs to dart through, and quarterback Kelly Bryant didn’t have much time to look over the field and find open receivers. A line that played pretty well for the first three games – with maybe the exception of right guard – was pushed around and controlled by the Eagles’ defensive front.

Bryant didn’t help the issues as he made some bad decisions both in the running game and throwing the football. He made some shaky throws, as well.

Bryant had been so strong through three games that he almost can be excused for having an off game. But championship quarterbacks learn quickly from their mistakes and don’t make the same mistakes twice.

It will be interesting to see how Bryant bounces back next week at Virginia Tech because he’s going to have to play better than he did Saturday, and the offensive players around him will have to play better, as well. Virginia Tech doesn’t have a dynamic offensive attack, but its offense is much better than Boston College’s. And Bryant and his offensive teammates won’t simply be able to rely on the Clemson defense keeping the Hokies shut down until the Tigers’ offense can find itself.

That said, the Clemson offense did find itself in the fourth quarter and came up with the plays it needed to make to get the win Saturday. It just should not have taken that long.

Watching the first three quarters, I said to my son, “So much for my column about Clemson being focused against an overmatched opponent.” The Clemson offense looked like a unit that was thinking about last week’s win over Louisville or next week’s game against Virginia Tech; anything other than the task at hand with the Eagles.

In the fourth quarter, the offense – and the entire team – played the way I believed it would play the whole game. That was good to see the Tigers get going and put away the game when they had to.

But it makes you wonder what the issues were in the first three quarters. Sure, field position was weird the entire game, but the Tigers put together a long drive in the fourth quarter to regain the lead when they were backed up against their own goal line.

That’s the offense this unit can be, but it has to be ready to do that from the start of the game and not wait until things get a little tense in a closer-than-expected contest.