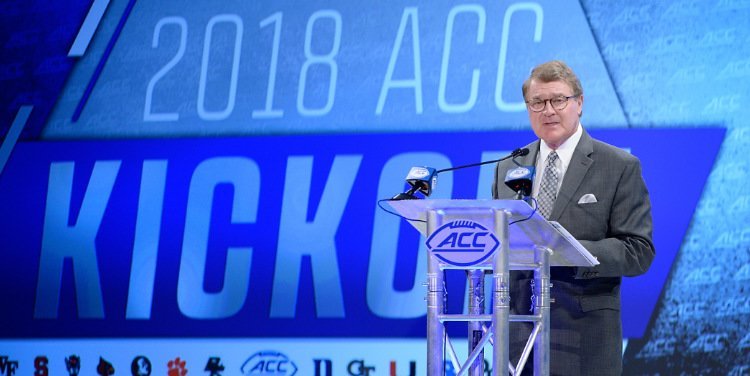 CHARLOTTE, NC – ACC Commissioner John Swofford told the media Wednesday that the ACC Network is on a schedule to launch in a year.

The league is one year away from launching the ACC Network, which will allow schools to broadcast sporting events on a linear network from on-campus studios. The league also unveiled the new network logo, which is the current league logo with an "N" tacked onto it.

“Two years ago at this event, we announced a new multimedia agreement with ESPN that included the launch of the ACC Network. Today we are approaching the one-year countdown to the linear launch of that network,” Swofford said at the ACC Kickoff at The Westin in Charlotte. “A lot of work has been done in preparation for next August by our partners at ESPN, by those in our offices in Greensboro, and at our schools.

“We are appreciative of the support, the dedication and the commitment by our partners at ESPN. I've said many times, you cannot have a better partner in this realm than ESPN. The pledge made by John Skipper and his team has been unwavering from the day we signed the deal, and we're extremely pleased by the seamless transition under the new leadership of president Jimmy Pitaro.”

Swofford said the schools have been a big part of getting the network up and running.

“I really want to acknowledge the work done by our schools, their production directors, the decisions that have been made on our campuses for the buildouts that will be necessary for us to have the channel. We're in great shape with that,” Swofford said. “And the production directors and others have been tremendously dedicated on our campuses. They've done an excellent job in preparing for the ACC linear productions, while simultaneously producing over 1,000 games last year for ACC Network Extra, well beyond the 600 which we initially anticipated.”

“Just yesterday here in Charlotte, we completed a two-day ACC/ESPN production summit that brought together our school production directors and ESPN's production leadership to begin the planning process for 2019. As you can imagine, with over 1,400 events on the schedule between the Network and Network Extra, there's a lot of planning and a lot of coordinating required over the next year.”

Swofford then said the network is on track for the launch.

“There are a few big items that we know are of major interest and, rest assured, we are tracking on those, he said. “This fall we will finalize the live event programming schedule for the fall, winter and spring sports. Throughout the academic year, we'll begin the process of considering our non-live program needs and reviewing different show ideas that will be on the ACC Network. And by next spring, we will have identified the talent for the programs that we create, as well as our lead game announcers for all sports.

“Those are the answers I have surrounding the topics of programming and talent. It's not that I don't want to share more with you, but the reality is I've provided all the answers we have at this current time. But, rest assured, by next year's football kickoff, there will be no shortage of information surrounding the ACC Network shows and talent, and we will at that time be within weeks of its launch.

Bottom line, whether it's production, distribution, scheduling or anything else related to the network, I am pleased to be able to tell you that we are right on schedule. All in all, significant strides have been made on all network fronts, and we are extremely pleased with the progress that continues to be made and look forward to the August launch with great anticipation.”