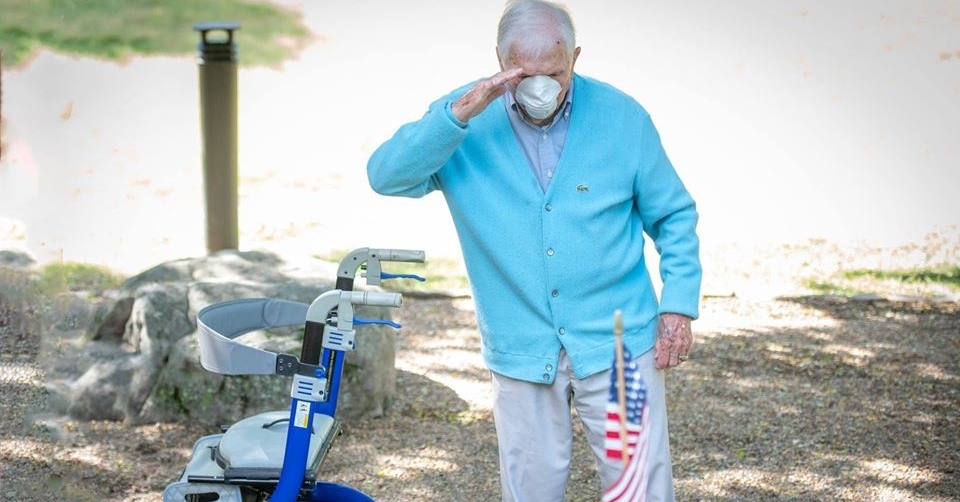 CLEMSON – On a beautiful, sun-drenched but cool day in Clemson last week, the hero who doesn’t think of himself as a hero stepped away from his walker and snapped off a salute that would have been the pride of any parade ground in the country. Colonel Ben Skardon, a proud 102-year old whose very bearing still marks his military heritage, was once again paying his respects to two friends and Clemson graduates who not only saved his life but gave theirs in the service of our country.

As another Memorial Day dawns, our country is fighting a war against an invisible enemy, and the soldiers on the front lines are the doctors and nurses to whom we owe so much. But there has to be room to tell the story, even if we’ve heard it before, of Skardon and his two friends, Henry Leitner and Otis Morgan.

Colonel Sandy Edge led a contingent that placed flags at Clemson’s Scroll of Honor last week. The Scroll of Honor, which fittingly sits just across the street from Memorial Stadium, contains the names of 493 alumni who gave their lives in service to our country. These heroes served in the campaigns listed below:

Skardon is a 1938 Clemson graduate and veteran of the U.S. Army. He fought in the Philippines in World War II, earning two Silver Stars and a Bronze Star for valor before becoming a prisoner of war when American troops were forced to surrender to the Japanese April 9, 1942.

Skardon lived through one of the most infamous ordeals of World War II, the Bataan Death March, and survived for more than three years in Japanese prison camps despite becoming deathly ill. It was in one of those prison camps when two fellow Clemson alumni, Henry Leitner and Otis Morgan, kept him alive by spoon-feeding him and eventually trading his gold Clemson ring — which he had managed to keep hidden — for food.

That story is now told at every Clemson ring ceremony, when Clemson seniors receive their class rings. Leitner and Morgan did not survive the war.

Here is an excerpt from a speech given by Col. Skardon in 2005.

As the flag was placed over the stone bearing Leitner’s name, Skardon rendered his salute, a silent but poignant thank you to a Clemson man who never came home to walk among the campus’ stately trees or hear the bells chime at Tillman.

Many wondered if Col. Skardon would show up this year – his age and concerns about the pandemic – but as photographer and writer Ken Scar says, “Nothing will ever keep him from honoring his brothers-in-arms who didn't make it back from the war.”

Scar then went on to describe what it was like to watch Skardon pay homage to his friends.

“He was his usual chipper self - displaying an energy and good humor that totally belies his age - except for when it came time to place the flags on Otis and Henry's stones,” Scar said. “This year he let his good friend Trent Allen stick the flags into the barrow for him, as the slope of the Scroll of Honor is quite steep and he was using a walker for the first time this year. He stood at attention saluting quietly until they were securely in place, and for a moment after. I think he said a personal prayer for each of them before he lowered his hand.

“As a combat veteran myself, it's a sight that always sends a chill through me. Every moment you spend with Col. Skardon you are witnessing History with a capital ‘H.’ Some day when I have grandkids, they won't believe I stood and watched a living WWII veteran honor his brothers like that in the year 2020.”

For those of us who are fortunate enough to walk the campus today, the echoes of those who made it possible ring loud and clear as the evidence of Clemson’s military heritage are featured prominently. As Col. Skardon so eloquently said, it is a debt that is heavy, and it is a debt that cannot be repaid.

Sunday afternoon, I took my 19-month old over to the Scroll of Honor. He was interested in the sun and the birds and the flittering of the flags, but one day he will understand that each tiny flag represents a son, a brother, a father, who didn’t come home. He will understand why Memorial Stadium has its name, and he will understand why he’s able to walk free. The ghosts of those who made that possible are everywhere on campus, you simply to have to look and listen and say a silent thank you to them.

Or, if you are Colonel Ben Skardon, you snap your best salute for a heavy debt. A debt that cannot be repaid.

To those that have given the ultimate sacrifice to protect our freedoms, we honor you today...and every day ???? pic.twitter.com/ACahTeaLSO