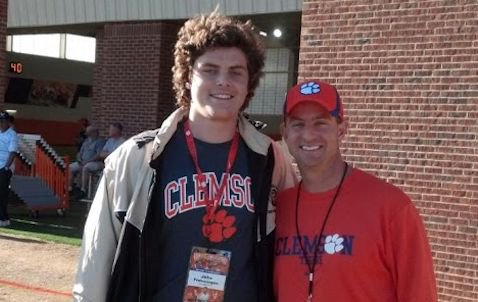 Jake Fruhmorgen with Dabo Swinney on a recent trip to Clemson. (Photo courtesy of John Fruhmorgen)

Clemson’s 2015 class is heavily focused on the lines of scrimmage and the Tigers added a big piece to the offensive line Thursday afternoon.

View Full Profile committed to Clemson during a ceremony at his high school, becoming the Tigers seventh commitment for the 2015 class and their third offensive line pledge.

The seventh-ranked offensive lineman in the country and the 124th overall recruit according to ESPN chose Clemson over Florida after dropping Michigan from consideration recently.

He narrowed his decision to Clemson and Florida from nearly 30 offers which included Alabama (father's alma mater), Michigan, Georgia, Tennessee, Notre Dame, California, Ohio State and Ole Miss. Fruhmorgen was offered early by Clemson and that put the Tigers in a prime position to pick up his services.

Fruhmorgen made his first trip to Clemson for a junior day during February and immediately named Clemson his leader, however the proximity of Florida to home kept the Gators in the picture throughout the process.

Fruhmorgen’s father – John Fruhmorgen – played on the offensive line at Alabama in the 1980’s.

Clemson adds Fruhmorgen to a 2015 offensive line recruiting class that already includes the nation's No. 1 tackle prospect in Mitch Hyatt

View Full Profile , who recently earned the distinction of becoming the first offensive lineman invited to Nike's 'The Opening.' Rivals ranks Green as the nation's No. 36 offensive tackle.

Jake is a Tiger pic.twitter.com/5j6hucUuk4

Check out his HUDL highlights here