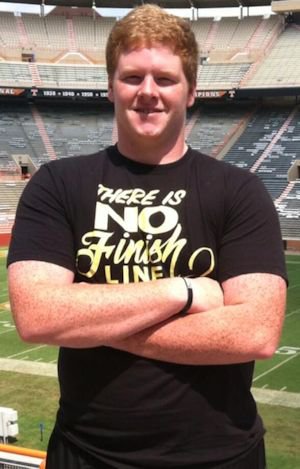 With only one remaining tackle spot open in the 2015 recruiting class, Zach Giella

View Full Profile knew that the time was now to commit to Clemson.

The Augusta (GA) Christian 4-star offensive tackle decided Wednesday that he couldn't wait any longer to become a Tiger and became Clemson’s second commitment in as many days as well as the fourth ESPN 300 offensive line commit for 2015. He is also the 13th overall commitment for the 2015 recruiting cycle.

“We’ve been talking a lot with my family about the pros and cons and seeing that Clemson is about an hour from our house, it seemed like a good fit,” Giella told TigerNet shortly after making his commitment official. “The coaches are great and Coach [Chad] Morris is my personal recruiter so I’ve built a great relationship with him. We have been in constant contact. Seeing how hard they are pulling for me and how much they want me to succeed, I just fell in love with the coaching staff. They have been recruiting me really hard since they offered and I knew that they only had one spot left for tackles. I thought it was a good fit and I love Clemson.”

Dabo Swinney
Head Coach
View Full Profile earlier tonight to confirm his commitment, and he said that he has never felt as special as he did when he gave Clemson’s head coach the good news.

Robbie Caldwell
Assistant Coach / Offensive Line
View Full Profile ],” Giella said. “I talked to Coach Swinney earlier today to firm up my commitment. He gave me what he calls his ‘A Game’ speech about the university, the program and the 2015 recruiting class. I said, ‘Coach, I want to talk to you about the 2015 class. I want to a part of your recruiting class and play for Clemson University.’ He went berserk when I told him. I have never felt love like that from a coach. It was extremely special for me.”

The 6-6, 300-pound prospect had offers from LSU, Mississippi, Mississipp St. South Carolina, and Louisville, among others, but his recruitment was short and sweet.

“They [Clemson] offered me on April 19th. I was on the way back from a recruiting trip and Coach Morris called and told me that we wanted to offer me a scholarship,” Giella said “He said that he was only offering the best tackles in the country and he wanted me to come play at Clemson. Since he offered me, they have done a great job of recruiting me and we stayed in constant contact.”

Despite growing up a ‘loose’ South Carolina Gamecock fan, Giella said Clemson is where is heart is.

“I grew up loosely a South Carolina fan because it was around me, but I never really got involved in the bad blood between Clemson and South Carolina,” Giella said. “I liked their school and the team, but I was never a die-hard fan. With that said, I am 100-percent Clemson.”

Giella described himself as being able to play multiple positions along the offensive line.

“The coaching staff describes me as versatile,” Giella said. “I can play on the left side and the right side or I can play wherever they need me. Our school runs a fast-paced spread offense and mix some power in there with our gap schemes. We also run off-tackle a lot.”