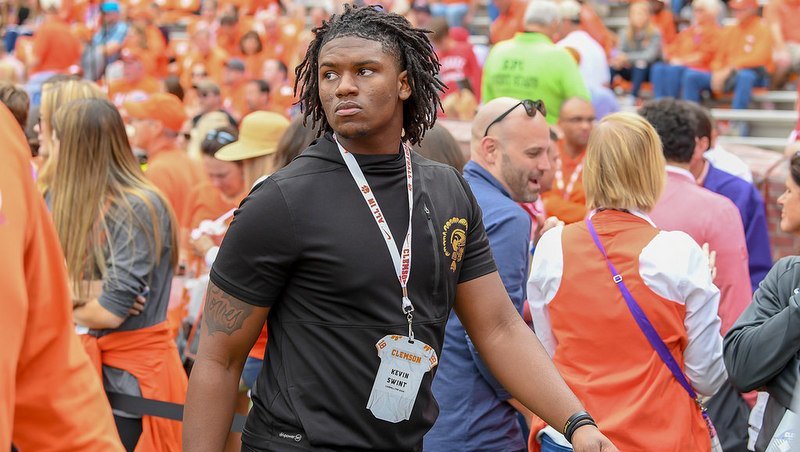 Swint says Clemson will help him pursue his dreams

When you know, you know.

Four-star 2020 linebacker Kevin Swint out of Carrollton (GA) committed to head coach Dabo Swinney and the Clemson Tigers over Florida, LSU and Ohio State on Saturday. Swint was one of two commitments for the Tigers in the 2020 recruiting class Saturday, joining 4-star defensive tackle Tre Williams.

Their commitments give Clemson seven for the 2020 recruiting cycle.

Swint’s commitment was part of a big junior day event at Clemson, and he told TigerNet the day was all he could have hoped for.

“It was a great day from start to finish,” Swint said. “I felt like I saw all of my long-lost uncles and brothers. I really enjoyed it. The campus gets better every time I come back.”

Swint didn’t hide his feelings about Clemson after he made the announcement.

Swint has been a Clemson lean for a while, and he said there wasn’t a reason to hold off on a pledge.

“The people actually care about me and my future and making me a better man day by day,” he said. “There really wasn’t a need for me to hold back on it much longer.”

“The first thing I think about it is I think they're building a dynasty with Dabo (Swinney). He recruits a great class. He doesn't really have a whole bunch of four and five stars. He recruits the guys that he knows are going to get the job done. That's really how I think about Clemson.”

Which coach did he tell?

“I sat down with Dabo and told him, and I told all coaches and they were fired up about it,” Swint said.

The 2020 class shapes up to be one of Clemson’s best, and Swint said he will continue to do his part.

“I think we will have a very solid class coming in, and will continue to recruit those guys,” he said.

“I'm a very versatile player, I can cover, play in the box, pass rush, I have a very high IQ, higher than most recruits. At least in my eyes,” he said.

Swint is rated as high as the No. 4 outside linebacker in the nation and the No. 81 prospect overall (ESPN). He posted 13 tackles for loss (3.5) with 60 total tackles, five pass breakups and two caused fumbles as a junior. He has averaged 71 tackles per season at Carrollton with 65 coming for loss.