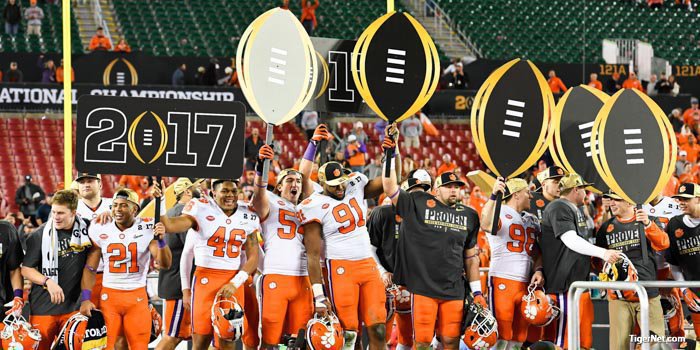 With Clemson and Florida State winning two of the last four national championships, ACC programs will face teams in 2017 that have won 10 of the last 11 national titles.

ACC teams will play more games against nonconference teams (7) that were ranked in last year’s final Associated Press Top 25 than any other Power Five conference. The ACC also has the second-highest percentage of games against teams ranked in the final AP poll of any of its peers.

ACC teams will play seven nonconference games against teams in ESPN’s Way-Too-Early Top 25 for 2017, which ties for the most among Power Five conferences.

ACC teams’ FBS nonconference opponents had the second-highest winning percentage (.526) in 2016 of any of the Power Five conferences.

"Our ACC football programs are coming off a record-setting season that was capped off with nine postseason wins, including Clemson’s National Championship and Florida State's Orange Bowl Title," said ACC Commissioner John Swofford. "Our football success over the last few years has helped put the ACC in one of the strongest positions we have ever enjoyed as a league. As we look ahead to 2017, conference games will continue to be extremely competitive and our schools are once again playing what is arguably the top nonconference schedule in the country. This is a great tribute to our schools and programs, and it will be exciting on a weekly basis for our fans."

No. 1 Clemson led five ACC teams, tying the league’s all-time high, which finished in the Top 25 of the final 2016 AP poll. The Tigers, who claimed their second national championship and the 14th by current ACC schools with a 35-31 win over Alabama in the College Football Playoff National Championship Game, were followed by Florida State (No. 8), Virginia Tech (No. 16), Miami (No. 20) and Louisville (No. 21).

Boston College, Clemson, Georgia Tech and Pitt will each face four opponents that were in the final Top 25. The Tigers face a rematch of the 2016 Dr Pepper ACC Championship Game when the Tigers face Virginia Tech in Blacksburg on Sept. 30, as well as Auburn (No. 24), Florida State and Louisville. Boston College will have games against Clemson, Florida State, Louisville and Virginia Tech. Georgia Tech faces Clemson, Virginia Tech, Miami and Tennessee (No. 22). Pitt will have games against Virginia Tech, Miami, Penn State (No. 7) and Oklahoma State (No. 11).

The ACC will have three games nationally-televised by ESPN or ESPN2 on Thursday nights, including Louisville at NC State (Oct. 5), Georgia Tech at Miami (Oct. 12) and North Carolina at Pitt (Nov. 9).

The schedule incorporates five games against Notre Dame. Boston College hosts the Irish on Sept. 16, while North Carolina (Oct. 7) and Miami (Nov. 11) also will have home games with Notre Dame. NC State (Oct. 28) and Wake Forest (Nov. 4) will each travel to South Bend.

One other neutral site game scheduled for later in the year has Boston College facing UConn at Fenway Park in Boston on Nov. 18.

In all, the schedule includes 56 regular-season conference match-ups over a span of 13 weeks and is capped off with the 13th annual Dr Pepper Atlantic Coast Conference Football Championship Game, which will be played on Saturday, Dec. 2.