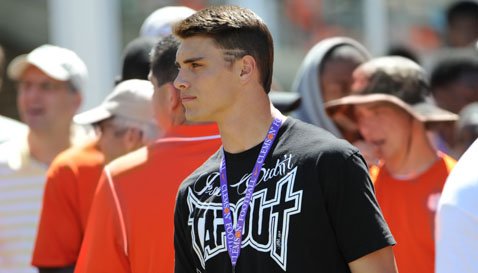 View Full Profile , and after he found out the details of the meeting, Muse pondered his future and decided that Clemson is where he wants to play college football.

As a result, Clemson, who is recruiting Muse as a safety, picked up its fourth commitment of the 2015 recruiting cycle.

The South Point prospect talked to TigerNet shortly after he informed the Clemson coaches of his decision, and he said that Clemson has always been his number one choice, but the meeting with Brooks really sealed the deal.

“I’ve been thinking about committing all week,” Muse said Sunday night. “Coach Brooks came by to see my coach on Tuesday and they talked and visited for a while. Clemson has always kind of been my number one and I just decided that this was the perfect time to commit.”

Muse attended the Georgia, Florida State and Citadel games and said that the opportunity to play in place like Death Valley was one that he couldn’t pass up.

“It’s just a great atmosphere,” Muse said. “They have great crowds for the big games and then The Citadel game had a sellout crowd and that just showed me that they have great fan support. I feel like it’s just one of the best colleges in the country. I also have a great connection with the coaches and the players.

Clemson being selected to play in the Orange Bowl also made Muse stop and think about what his four years at Clemson may hold.

“I saw that Clemson made it to the Orange Bowl and I know that all four years that I’m at Clemson, we will be in contention for championships and the top bowls,” Muse said.”

Despite having a long list of offers, Muse doesn’t like to talk about his accomplishments on the field.

“I don’t really like to talk about myself,” Muse said. “I’m just a fast guy that gets around the field and makes plays.”