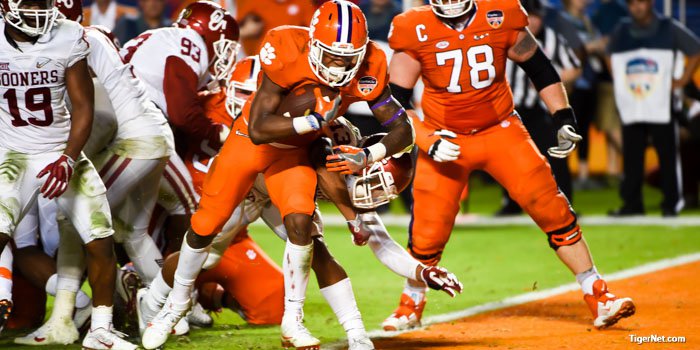 Gallman had 26 rushes for 156 yards and 2 touchdowns in the Orange Bowl.

MIAMI GARDENS, FL – Go ahead and warm up the presses. Print that 15th ticket, because the Tigers are headed to Arizona.

Top-ranked Clemson dominated No. 4 Oklahoma 37-17 in the Capital One Orange Bowl on New Year's Eve, and their 15th game of the season will be in the College Football Playoff National Championship on Jan. 11 (8:30 p.m. ET, ESPN).

Clemson will take on Alabama in that game and the storylines will abound – Clemson head coach Dabo Swinney is an Alabama grad and coaches on both teams have worked at both programs. But for one night, the Tigers will celebrate the Orange Bowl victory over the Sooners and ponder the 15th game.

And Dream the Dream.

“Well, day one, August 3rd, when we started the season, I gave them shirts that said, 'Dream The Dream,'” Swinney said. "I said, '15 for '15,' with the message being let's make them print 15 tickets this year, somehow, someway. Tonight coming in, I said, 'Hey, tonight we make that dream a reality. You're four quarters away.' My gosh, they've got to print a 15th ticket to see the Tigers now."

There were plenty of outside distractions and detractors – trash talk from Oklahoma was prevalent throughout the week, and even former West Virginia players were using social media to pile on after Oklahoma’s touchdown on the game’s first drive. The Mountaineers – wrongly – tried to remind everybody that the last time Clemson was in the Orange Bowl it didn’t work out. They remembered West Virginia’s win in 2011 but forgot that the Tigers beat Ohio St. on the same field two years ago.

In 2011, the Tigers were a program that was just happy to be in Florida for a BCS bowl game, having defeated Virginia Tech in the ACC Championship and dreaming of what could be. Those dreams turned into nightmares, and many wondered if the program could recover from the 70-33 beating administered by the Mountaineers that night.

Fast forward four years and the Tigers administered a beating of their own in crushing Oklahoma’s will along both lines of scrimmage. Clemson made Oklahoma’s offense one-dimensional, completely shutting down Samaje Perine, Joe Mixon and the Sooner running game. Touted as perhaps the nation’s most balanced team heading into the contest, the Tigers held Oklahoma to a paltry 67 rushing yards.

Clemson assaulted Oklahoma’s defensive line to the tune of 312 yards. The Sooners looked quicker and more physical in the first quarter of play, but the Tigers rang up over 250 yards of offense in the second quarter, and despite Deshaun Watson’s interception at the end of the first half Clemson went into the locker room knowing it was the better team.

It showed on the first drive of the third quarter. Wayne Gallman ran for 11 on the first play of the half. Then he ran for five. Then he ran for six more. Zac Brooks came in and rumbled for 17 yards, bowling over the Sooners’ Ahmad Thomas in the process. A few plays later, Gallman made it look easy in scoring the go-ahead touchdown.

The Tigers never looked back, and they began to dream of the desert.

Center Jay Guillermo said he could see a change in the Sooners’ body language after that third quarter drive.

“You could just tell,” Guillermo said. “They were getting tired, and when Wayne came out and ran the way he did, we knew we had them on the ropes. We knew we had to close it out, and when you’ve got Deshaun and Wayne back there running like they can, it makes our job easier. We won the game up front.”

The physical style of play wasn’t just on the offensive side of the ball. Clemson’s defense took the Sooners’ jabs, but it was that same group that delivered the knockout punch on Baker Mayfield and the Sooners.

"There's no doubt that we've been the more physical team now for about seven weeks in a row," Oklahoma offensive coordinator Lincoln Riley said, "but we weren't tonight."

Defensive end Kevin Dodd said Mayfield began to tire of the abuse he was taking from Clemson’s defense.

“We knew he hadn’t been hit as much and we knew our front seven was going to get after him and challenge him a little bit,” Dodd said. “As much as we hit him, when you hit them enough, they become inaccurate and get antsy and want to leave and escape the pocket. If he can make a good throw on the run, hats off to him, but we didn’t want him sitting in the pocket delivering throws.”