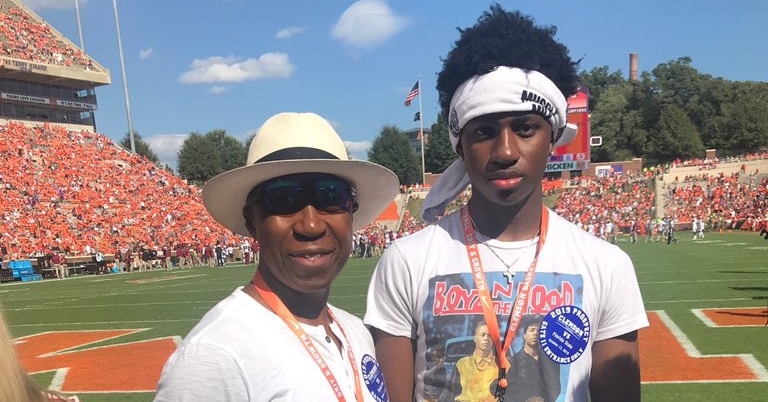 One of the top point guards in Georgia stopped by Clemson last weekend to see the Tigers football team in action but also to spend time with the Clemson basketball coaching staff.

Garrison Powell is a 6-foot-5 point guard out of Atlanta (2021) class, and he made an unofficial visit to Clemson last Saturday for the Florida State game. The Tigers have been showing a lot of interest in Powell and wanted to see him on campus before moving forward with an offer. He has offers from Ole Miss, Mississippi State, Middle Tennessee, Elon and James Madison, plus Georgia, Tennessee, Auburn, Alabama and Georgia Tech are showing strong interest. The next step for Clemson is for head coach Brad Brownell to watch him play again and then make the call on an offer.

“They tell me that they like my frame, my body frame,” Powell said. “They think that I’m a good point guard. They were down there to see me last week and I like the relationship I have with the coaches. And they said for me, living in Atlanta just two hours away, it’s a short drive for me to come home, like a lot of the guys who are here now, but they love Clemson so much they rarely go home. I liked the facilities and I should be going up there for another visit soon but I don’t know when.”

Powell has watched the Tigers play with a focus on their backcourt. They are going smaller this season and from what he’s been told by the staff, what they will be doing would fit well with his skill-set.

“I like how they let their guards play,” Powell said. “This year they said they are probably going to play like two point guard type players, and I like that because that’s a fast pace. They are going to a smaller lineup so they are going to be up and down and that’s my type of game. I like pushing the tempo. I’d be good fit in that because I’m a big guard who likes to get down hill in transition and I’m very good at creating for others as well as creating for myself and getting a bucket when I need to. In high school I can get 23 points per game as well as 6 assists. I’m more of a scorer but with my scoring abilities it helps me create for others.”

As for that Clemson offer, Powell believes he’s close on getting one. It’s just a matter of when Brownell can get back to Atlanta to see him play and make sure he checks off all the boxes.

Powell also has visited Tennessee, Auburn, Georgia, Alabama, Ole Miss and USF. Alabama, he said, has also been on him strongly and has seen him a lot. He plans to return to Alabama for the LSU football game. He also cited Georgia and Georgia Tech as two others that like him. He will wait until after his AAU season this summer with Game Elite before narrowing his list.