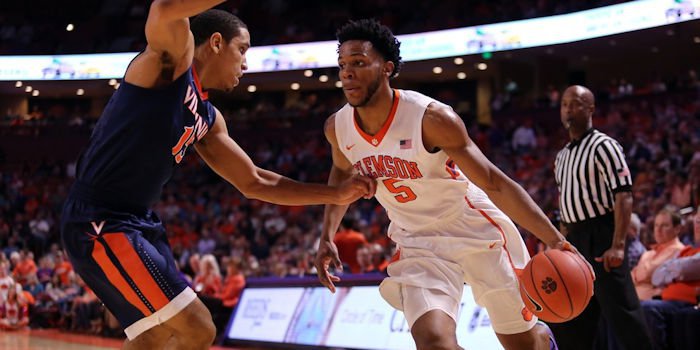 The Tigers overcame an early 12-0 deficit and were poised to knock off No. 4 Virginia Tuesday night, but missed free throws and an inability to hit shots in the clutch doomed Clemson as the Cavaliers escaped with a 64-57 victory on Senior Night at the Bon Secours Wellness Arena.

The loss was the sixth in nine games for Brad Brownell’s squad, which falls to 16-13 overall and 9-7 in the ACC. Virginia improves to 23-6, 12-5. Jaron Blossomgame was stellar, scoring 31 to lead all scorers, but no other Tiger scored in double figures. Malcolm Brogdon scored 18 to lead Virginia, while London Perrantes added 13.

The Tigers had won on Senior Day in nine of their past ten attempts, excluding 2013-14 when Clemson did not have one on its roster. The Tigers were in search of its first top-five win since 2008-09 vs. Duke.

"This was obviously a disappointing ending for a group of seniors that I was hoping we could send out with a great win. Give Virginia credit, they came in and Malcolm (Brogdon) made his first four threes, he was really hot," Clemson head coach Brad Brownell said. "They executed great from the start, we missed some shots early. I thought our guys showed great resilience, for us to be down 12-0 to the No. 4 team in the country and to take the lead. I thought there was probably a 25-minute stretch in the game where we outplayed them. They are a championship caliber team, because in the last eight minutes of the game they know how to win games."

The Cavaliers got off to a blistering start, opening a 12-0 lead on three 3-pointers by Brogdon. The Cavaliers then went almost four minutes without scoring, and the Tigers finally got shots to fall and Virginia led just 23-19 with 6:59 to play in the half.

Both teams settled in at that point, however, and points were hard to come by. Clemson closed to within three at 28-25 on two free throws by Blossomgame with 2:17 left to play in the half, but the Tigers managed just one more bucket and trailed 33-27 at intermission. Brogdon and Blossomgame led all scorers with 14 points apiece.

The Tigers started out the second half on fire. Blossomgame opened the period with a poster worthy dunk, then hit back-to-back 3-pointers as part of an 8-1 Clemson run as the Tigers took a 35-34 lead – their first of the game – just three minutes in.

The Cavaliers followed Clemson’s run with a 7-1 run of their own – including four more points by Brogdon – as Virginia took a 41-36 lead with 11:49 to play. Things got physical at that point as both teams began to battle on both ends of the court.

Clemson got a layup from Blossomgame that closed the gap and Grantham hit a 3-pointer that gave Clemson a 42-41 lead with 10:55 to play.

The Cavaliers came back to take the lead at 46-44 on a 3-pointer by Hall, but Gabe DeVoe hit a 3-pointer on the other end a minute later to put the Tigers back in front 47-46. The Cavaliers began to take advantage of the Tigers’ aggressiveness at that point and hit free throws on three consecutive trips down the floor and then hit a layup for a 53-47 lead with 4:17 to play.

A layup by Nnoko made it 53-49, but Jordan Roper fumbled the ball away with a chance to cut it to two. The next trip down the court, however, Blossomgame hit a 3-pointer that made it 53-52 with 3:09 to play. The Cavaliers missed a 3-pointer and Roper was fouled and he went to the line with a chance to take the lead, but he missed both free throws and the Cavs made the Tigers pay.

Perrantes hit a 3-pointer, and the Cavaliers got a dunk to jump back up by six at 58-52, bur DeVoe hit two free throws with a little over a minute remaining as Virginia held a 58-54 lead. The Cavaliers were able to make free throws and run out the clock in holding on for the win.

Clemson plays at Boston College Saturday in the regular season finale at noon.

Clemson vs UVA Boxscore
Get the latest Clemson gear right here!
Comment on this story