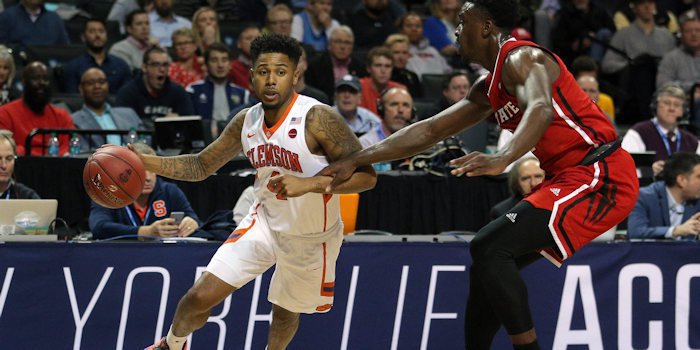 Shelton Mitchell drives in the first half (Photo by Brad Penner, USAT)

Clemson got 22 points apiece from Shelton Mitchell and Jaron Blossomgame in defeating North Carolina St. 75-61 in the first round f the ACC Tournament at the Barclay’s Center in Brooklyn, New York, Tuesday afternoon.

The win broke a three-game losing streak in the tournament for the Tigers, who hadn’t won an ACC tourney game since defeating Georgia Tech in Greensboro three years ago. Clemson will face fifth-seeded Duke at 2 p.m. Wednesday afternoon. The Tigers haven’t won two games in the tourney since defeating Boston College and Duke in the first two rounds in 2008.

Clemson is 4-6 all-time against the Blue Devils in the tournament.

Guard Avry Holmes injured his ankle in the second, but head coach Brad Brownell told the media after the game that he was optimistic Holmes would be able to play against the Blue Devils.

Sidy Djitte scored just six points but grabbed 13 rebounds for the Tigers, who have won three straight in improving to 17-14 overall. NC State falls to 15-17.

The ACC Tournament is being held for the first time in the state of New York. Clemson faced and defeated State just six days in Clemson claiming a 78-74 win. It was only the second meeting in the ACC Tournament between the two teams since 1994. The six-day turnaround rematch is the quickest against an ACC foe since 2001, when Clemson played Florida State twice in five days.

Our attention to detail was better than it's been. So very pleased to get this first win.

State jumped out to a quick 5-0 lead in the game, but Clemson scored the next points and took a 10-5 lead on a thunderous dunk by Elijah Thomas with 16:07 left in the half. The Tigers maintained a working advantage for much of the half, but a 3-pointer by Maverick Rowan made it 24-21 Clemson with just over five minutes left in the half.

Clemson ended the half on a 15-7 run, and Avry Holmes’ 3-pointer with just six second remaining sent Clemson into the locker room with 39-28 advantage.

A dunk by Donte Grantham started the second half for the Tigers, and a slashing drive and dunk by Mitchell three minutes later gave Clemson its biggest lead of the game to that point at 45-33. Clemson continued to push its advantage, and a corner three by Marcquise Reed gave the Tigers a 57-41 lead with 10:08 left in the contest.

State tried to chip away at the lead, but a Blossomgame dunk pushed Clemson’s back to 16 at 63-47 at the seven-minute mark. However, two free throws by Maverick Rowan trimmed the lead to 11 at 68-57 with 2:55 to play.

The lead remained at 11 when State fouled Mitchell with 1:16 to play, and Mitchell hit both to make it 72-59. Thirty seconds later Mitchell drilled another 3-pointer for a 75-59 lead, and State hit a final layup for the final score.

Blossomgame said the Tigers are looking forward to facing Duke.

"Another opportunity. We focused on beating NC State," he said. "We got that out of the way. We'll regroup now and focus on Duke. We played them tough up there in Cameron, lost by two. I'm definitely excited for round two."

• The Tigers won their first ACC Tournament game since 2014 with a 75-61 win on Tuesday; it was Clemson’s first over NC State in the conference tournament since 1994, and the third in the event over the Wolfpack (3-6).

• Clemson won its third straight game to start the month of March; that is the first time a Tiger team has achieved that since 1980.

• The Tigers had 17 offensive rebounds Tuesday, their highest total against an ACC foe this season and most against any opponent since SC State (23) on Dec. 13.

• Head coach Brad Brownell tied Cliff Ellis (1984-94) for the most wins in Clemson history against ACC teams with 59. He would move ahead of Cliff Ellis and take sole possession of the career record with a win over Duke on Wednesday.

• Shelton Mitchell produced his second 20-point game of the season, matching Blossomgame for game-high honors with 22.

• Mitchell matched career highs for both field goals (8) and three-pointers (3).

• Mitchell has scored double figures in nine straight and 11 of Clemson’s past 12 games.

• Sidy Djitte posted six offensive rebounds Tuesday, giving him 107 on the season; that ties Trevor Booker for the most by a Tiger since 2008-09.

• Marcquise Reed has made his last 12 free throw attempts and is shooting 89.9 percent on the season.