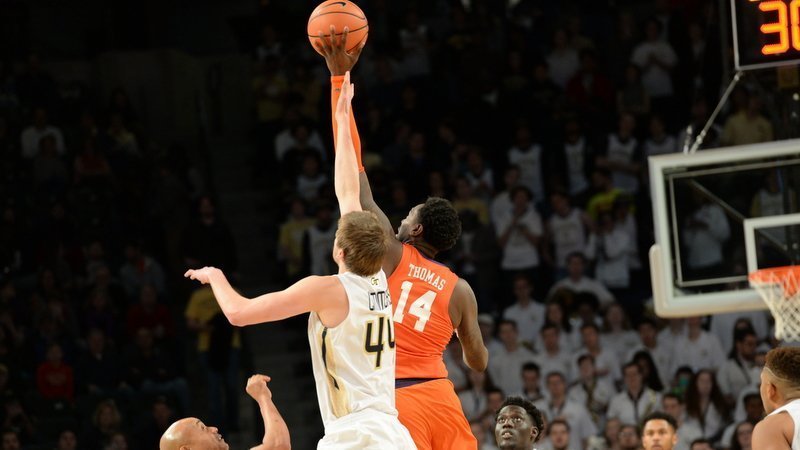 Clemson is learning to play without the services of senior forward Donte Grantham, and the learning process will continue Tuesday night when No. 20 Clemson plays host to No. 19 North Carolina (7 p.m., ESPN).

In the first game without Grantham, who tore his ACL against Notre Dame, Clemson was blown out on the road at Virginia. The Tigers responded Sunday with a 72-70 victory on the road at Georgia Tech.

“Coming off of a really good win last night at Georgia Tech. Got off to a slow start,” head coach Brad Brownell said. “I thought Georgia Tech really played well during the first 10-12 minutes of the game and had us on our heels a little bit. Gabe DeVoe made some big shots for us to keep us in it against their zone and our guys battled back and I thought showed a lot of grit and toughness. I think our defense improved the longer the game went. We managed to come out with a very nice road win in a difficult environment. Proud of our guys. We're still kind of figuring out how to play without Donte Grantham but hopefully made some strides with the win last night at Georgia Tech.”

In the seven ACC games this past weekend, road teams went 5-2 with six of the games were decided by five points or less or in overtime. Clemson carries a 6-3 ACC mark into Tuesday night’s game, the ninth time in program history (65 ACC seasons) that the Tigers have started a conference season at least 6-3 . Since the ACC moved to an 18-game schedule in 2012-13, the Tigers have now matched their best start through nine games when playing at least five road games, and it’s the first time since 1986-87 that Clemson is 21 games into a season without losing consecutive games.

Clemson might also be without the services of senior big man Mark Donnal, who was injured late in the win over Tech.

“First, Mark took a shot to the head yesterday right there near the end,” Brownell said. “I think he's going to go under concussion protocol stuff today. We probably won't know until later today whether he'll be available for the game or not. We'll find that out later.”

Head coach Roy Williams was asked if he thought the loss of Grantham will change the way Clemson plays.

“I don't think it's that different. If you look at the game we played here, Donte probably had his worst game of the year,” Williams said. “I think he made one field goal. I think he was 1-for-9 and didn't shoot at all during that 15 consecutive. He's been a fantastic player for them and it's a big loss for Brad, but he didn't play that well against us. Those other guys shot the ball in the basket. Shelton (Mitchell) and Marcquise (Ree), Gabe made a bunch of shots and we didn't do a very good job on Elijah (Thomas) inside. The only thing we did that game was just outscored them.”

Because of the short turnaround time – Clemson will tip off against the Heels just 47 hours after completing the win over Tech in Atlanta – Brownell said the Tigers will have only light workouts Monday and Tuesday.

“In terms of preparation, we won't do much physically at all today. We'll do some film work and we'll walk through a few things and maybe shoot a little bit and talk about both offensive and defensive keys and what we need to do and meet a little bit,” Brownell said. “We'll have a gameday shoot-around to try and tighten some things up. Obviously, it's a difficult turnaround for us. A team that we've had a hard time playing against lately, so we've got to figure some things out and need a really good mental preparation day to get ready to go for tomorrow night's game.”