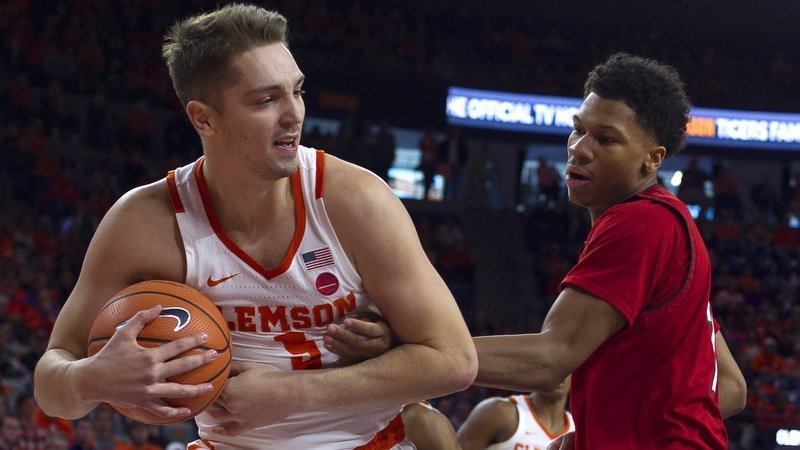 Mark Donnal rips the ball away from a Louisville defender (Photo by Josh Kelly, USAT)

CLEMSON – The Cards got punched in overtime.

No. 25 Clemson hit 17 second-half and overtime foul shots and overcame a sluggish start in defeating Louisville 74-69 in overtime at Littlejohn Coliseum Saturday afternoon. The win was the 10th in a row for the Tigers, who improve to 14-1 overall and 3-0 in the ACC, the best conference start for the Tigers since the 2006-07 season.

Marcquise Reed scored a game-high 24 points while Shelton Mitchell and Gabe DeVoe pitched in 13 apiece. Elijah Thomas recorded a double-double with 12 points and 10 rebounds. Louisville out-rebounded Clemson 46-35 but also recorded 21 turnovers. Louisville falls to 11-4 overall and 1-1 in the ACC.

The win is also the best 15-game start for head coach Brad Brownell in his career.

"Super proud of the way our team competed because I thought the Louisville kids really competed as well. Both teams really struggled to score," Brownell said. "I thought both defenses were a big part of it. I thought they really bothered us with some things and I thought I we bothered them. Guys were prepared and we showed in overtime that we can score and play better offense. I’m really pleased that we can win a game where we had to defend. That’s kind of what we talked about at the beginning of the second half.

"I challenged them that we need to keep them (Louisville) around 50. If they got to 50 quickly in the second half, we probably weren’t going to win the game and to my guys’ credit, I thought they really took that to heart. I thought we were worrying too much about our offense in the first half and missed shot and bad plays and trying to do too many crazy things. We just got too excited by the atmosphere and knew it would have to be a little bit more of a defensive, gritty game to win and I thought we did that."

Clemson held on to beat Boston College a few days ago and held on to defeat Louisville Saturday, winning the close games that escaped them last season.

"We’re going to talk about this a lot this year and I know every time we win a close a game this is where we’re going to go and it’s fine, but players make plays. Guys made free throws. I didn’t do anything with that," Brownell said. "They made shots. Gabe made threes. We had two great stops. In the last minute, it was unfortunate Eli threw the ball away but we had to stop them twice and we did to send the game to overtime. There is a little bit of momentum that comes from winning close games that guys get more comfortable and confident and you hope that’s the case.

"Last year’s team, we won early in the season. Everybody thinks we lost every close game, but we did win some early and that’s why we were 10-2 and then we didn’t get the wins late in the year and that’s why we finished poorly. We’re still most of the same guys but we’re competing a little bit. We’ve had a couple of things go our way and we’re certainly trying to build on that."

Reed started overtime with a pair of steals and scored both buckets as Clemson scored the first four points of the period in taking a 59-55 lead. The Cards added another bucket in the lane to make it 59-57, but DeVoe hit a 3-pointer from the corner that made it 62-57.

On the other end of the court, Thomas blocked a Cardinal shot and DeVoe raced to the offensive end, sinking a 3-pointer from the same point on the right win to make it 65-57 with just under two minutes to play. Louisville scored to make it 65-59, but Grantham hit one free throw to put Clemson ahead 66-59 with 1:13 to play.

However, Ryan McMahon drained a 3-pointer and the Tigers called a timeout trailing 66-62 with exactly one minute to play. Louisville immediately fouled Mitchell on the inbounds play, and he hit one of two free throws for a 67-62 lead with just under a minute to play.

The Cardinals missed a shot on the other end, and they fouled Mitchell with 36.8 seconds remaining. He drained both foul shots to give Clemson a 69-62 lead. McMahon promptly drained another long 3-pointer and the Cardinals were right back in at 69-65 with 30.7 seconds left on the clock.

DeVoe was fouled on the inbounds and drained both free throws for a 71-65 lead, but Clemson was called for goaltending on the other end and it was 71-67 with 19.3 seconds to play. Mitchell hit both free throws, however, and the Tigers went back up by six at 73-67. Quentin Snider raced end-to-end for a layup that made it 73-69, but Reed was fouled with 11.2 seconds on the clock. He hit one of two and Clemson’s lead was five at 74-69.

McMahon missed a desperation 3-pointer for the Cards and Clemson held on for the win.

Clemson began the game with an aggressive 6-2 run with junior Elijah Thomas going after Louisville’s freshman center Malik Williams – who was starting in just his third game. Thomas scored four of Clemson’s first six points before exiting the game after an offensive foul. Clemson’s run ended with a trey by Quentin Snider and the Cards took a 7-6 lead with 13:57 to play in the first half.

After a fadeaway in the lane by Gabe DeVoe, Clemson led 8-7 at the 11:29 mark, but both teams struggled offensively to start the game, going a combined 7-for27 from the field.

With Clemson trailing 9-8, Marcquise Reed began to find his shot and the Tigers went on a 10-4 run over the next four minutes to make it an 18:13 Clemson advantage with just under six minutes to play in the half.

Clemson missed several easy opportunities around the basket and failed to score during the next four minutes, while Louisville went on an 8-0 run to take a 23-21 lead. However, freshman Aamir Sims – who was giving Clemson minutes with Thomas and Mark Donnal on the bench in foul trouble – ended the scoring drought and tied the game at 23-23 with one minute to play before intermission.

It was more of the same to start the second half. Clemson continued to play good defense but couldn’t find the basket on the offensive end. Outside of two free throws from Shelton Mitchell, Clemson failed to score over the first 4:11 of the second half. Louisville had its largest lead at 30-25 at the first media timeout.

With a three from the corner, Marcquise Reeds sparked a 17-4 Clemson run, which included a thunderous dunk from Donte Grantham. Mitchell drew a foul on a lay-in and Reed hit a pair of free throws to give Clemson its largest lead of the game at 42-34 with just over nine minutes to play.

Louisville answered with a pair of layups and a quick four points to make it 42-38 with 8:02 to play.

An 8-0 run by Louisville that was helped by key Clemson turnovers, gave the Cards a 55-53 lead with two minutes to play. Thomas and Clemson answered to tie the game with 1:41 to play, but Mitchell missed a jumper that could’ve given the Tigers the lead with just under a minute to play.

The Tigers and Cards traded baskets over the next four minutes, but while Louisville was making twos, Reed nailed two three-pointers and Gabe DeVoe hit a trey of his own to keep a 53-47 lead with 3:46 to play.

Louisville had the ball for the final shot after an errant pass by Thomas, but great defense by DeVoe forced a bad shot by Quentin Snider, sending the game to overtime.

Clemson returns to action next Thursday night, traveling to Raleigh to take on NC State in a game set for a 9 p.m. tip. Clemson defeated NC State 78-62 at the end of December.

Notes: Clemson improves to 14-1 on the season (best start since 2008-09) … the Tigers earned just their second win in seven tries against Louisville and its second in the last three contests … it marked the Tigers’ first home win as a nationally ranked team since a Jan. 13, 2010 win over No. 12 North Carolina (83-64) … with the win Brad Brownell tied Oliver Purnell for third on the all-time list of victories at Clemson (137) … also with the win the Tigers extended its win streak to 10 games … the Tigers have now started 3-0 for the fifth time in program history (1979-80; 1986-87; 1996-97; 2006-07; 2017-18) … of those previous seasons, the Tigers averaged 24 wins per year … Marcquise Reed finished with a career-high five steals … it was Reed’s fourth 20-point game of the season … Elijah Thomas collected his fifth double-double of the season … Donte Grantham grabbed double-digit rebounds for the fifth time this season.

Clemson vs. Louisville boxscore
Get the latest Clemson gear right here!
Comment on this story