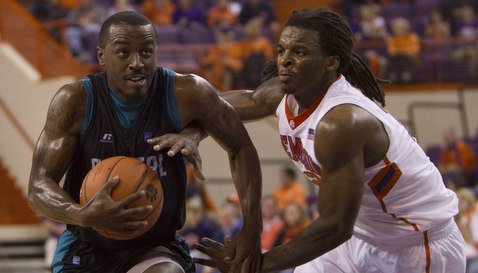 Brad Brownell
Head Coach
View Full Profile showed his team a quick replay of last year’s game between the two schools, a 69-46 rout by the Chanticleers that gave the Tigers a fourth loss in 10 games to open the season.

Brownell’s players got the message.

Devin Coleman
RS So. Guard
#15 6-2, 200
Philadelphia, PA
View Full Profile came off the bench to score 14 for the Tigers, who had lost two straight in the series.

“We just fed off of what happened last year,” McDaniels said after the game. “We knew this team was going to come in here and play as hard as they could, and we knew we had to lay it down on them. We watched film of it in pregame, actually, so we had a little motivation going out there.”

The Tigers jumped out to that 13-0 lead on the strength of rebounding and defense. Coastal missed its first 10 shots from the field – including seven from 3-point range – and didn’t score on any of its first 12 possessions before finally getting a bucket with 10:30 remaining in the half to make it 13-2.

“I think our guys were just locked in defensively,” Brownell said. “When you hold a team and they don’t score for a long time at the beginning, the basket looks a little smaller. We were talking to our players about that, the longer you hold them to zero it’s going to be harder for them to make one. I don’t think we’re as physically intimidating as we were last year. We play pretty hard and pretty long into possessions and I’m really proud of how hard our guys played into possessions.”

The teams traded buckets over the next six minutes of game play, but Filer knocked down his third three-pointer of the half with just over four minutes remaining, giving Clemson a 28-11 lead.

However, the Chants outscored Clemson 10-5 over the final three minutes – taking advantage of 11 Clemson fouls, and the Tigers led 33-21 at intermission.

Coastal closed to within 35-25 on a layup by Warren Gillis at the 17:40 mark of the second half, but the Tigers. However, Clemson sealed the game with an 11-2 run ignited by a McDaniels jumper and a McDaniels steal and feed to Rod Hall

“That was a very good performance by our team,” Brownell said. “We were very locked in defensively thanks to the scouting, and I think we made it hard on Coastal most of the night. If we don’t play poorly offensively at the end of the first half, I thought we were going to put it away in the first half. But to their credit they kept fighting and made a couple of plays. But I thought our defense was outstanding tonight.”

“We have no excuses. That was just not a match. They beat us in every facet of the game,” Ellis said. “I am very impressed with Clemson. They are long, and their length bothered. Their shot blocking intimated us. They were very superior on the boards, and it got to us. They are a very athletic team with great chemistry. We have no excuses. They just took it to us.”