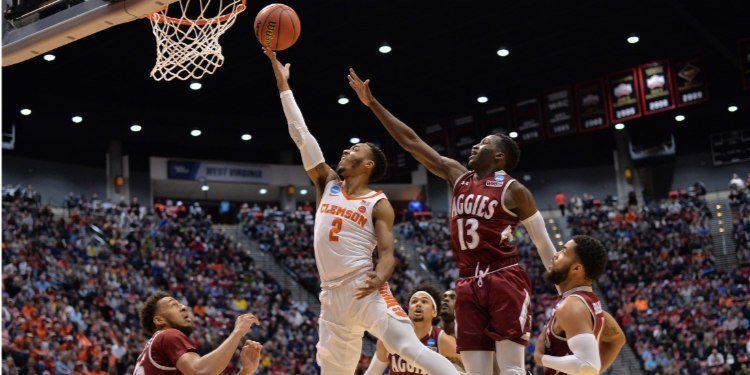 SAN DIEGO – A win over Auburn Sunday would put the Clemson basketball team in rarefied air, at least when it comes to Tiger basketball history.

Clemson defeated New Mexico St. Friday night to advance to the Round of 32, where the Tigers will take on Auburn for a chance to move on to next week’s Sweet 16. Friday’s win gave the Tigers 24 wins this season, which is one short of the official school record for wins in a season. The Tigers finished 25-6 in 1986-87 and 25-11 in 2006-07.

Impressive stuff for a team picked to finish 13th in the ACC this season.

It was all made possible by Friday’s win, however.

“Terrific win for our team. Thought our guards especially these two guys just played outstanding,” had coach Brad Brownell said. “You know, the game was a little bit different in both halves. I thought the first half both teams were excited to play, got after each other a little bit. The second half they really changed the way the game was. They started trapping and pressing because they got down and made it aggressive and really they turned it into game where players have to make plays and fortunately our guards are good enough to do that. I thought we did a good job of attacking the paint, playing out of the paint and finished off with a pretty good job defensively.”

New Mexico St. trimmed Clemson’s lead to six late in the contest, but guards Shelton Mitchell Gabe DeVoe, and Marcquise Reed each made plays down the stretch.

“They're good players. Our guys have been through a lot this year,” Brownell said. “There has been a lot on our guys, Gabe and Shelton and Marcquise. They have had to shoulder the load in a lot of situations. They are good guys. They can play. If we just give them space and tell them to make plays. It's as simple as that. I'm just proud of our guys for believing in our team, believing in what we do, how we do things. Our preparation was extremely good this week.

“Our guys were very focused and I knew we would play well. I think we showed that today. We weren't surprised at all by what we saw and I wasn't surprised by how well our players played. This is a big-time atmosphere that we haven't been in in a while, but I think our guys showed that they're more than capable and ready to be in this environment.”

Brownell said the Tigers didn’t do anything special when the lead was cut to six.

“Not really. I think we just, we spread it out a little bit, you know,” he said. “We kind of stopped calling plays. The longer the game went the less plays we ran and we allowed our guys the freedom to make plays, get out of each other's way a little bit because I think it was easier to play in space than it was to try and run action and force passes and do different things against that kind of pressure. I didn't think was as productive, and when you do that you've got to have good players that can go make the plays and unfortunately for me we do.”