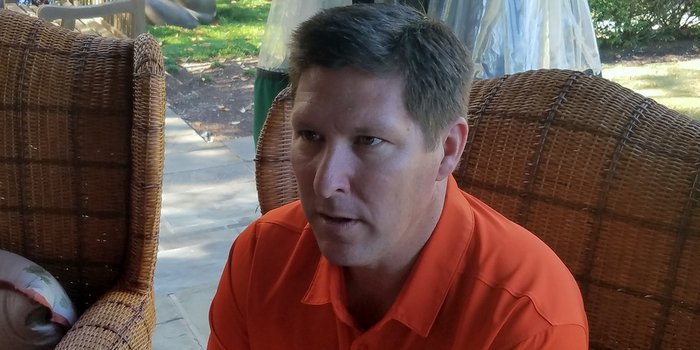 SUNSET – Brad Brownell’s basketball team will feature a lot of new faces this season, and the Tigers have a rebuilt and shiny new facility in which to play.

For Brownell, however, it’s all about being consistent, doing better in non-conference games and hoping the talent, consistency and emphasis on winning the early-season games will result in a postseason berth.

Clemson is coming off a year in which it was 17-14 and went 10-8 in the ACC. Brownell adds Vanderbilt transfer Sheldon Mitchell, Robert Morris transfer Marcquise Reed and Texas A&M transfer Elijah Thomas to an experienced group that includes All-ACC player Jaron Blossomgame and returning starters in Avry Holmes and Donte Grantham.

Mitchell sat out last season after transferring the Commodores, where he started 11 of 31 games for the Commodores. Mitchell averaged 4.3 points and 3.3 assists per game but also led Vandy with 103 assists. The 6-foot-9, 235-pound Thomas was ranked by ESPN as No. 31 in the country coming out of Lancaster (Texas) High School, but decided to transfer mid-season last year and won’t be available to the Tigers until the end of December. Reed is a shooter who started 28 of the Colonials’ 35 games, averaging a team-high 15.1 points per game in leading Robert Morris to the NCAA Tournament.

“I think we have more offensive firepower than we’ve ever had,” Brownell said Wednesday morning at his annual media golf outing at The Reserve. “We have more guys that can score consistently, and the challenge will be getting these guys to defend at a really high level. Oftentimes, when you have offensive-minded players they don’t like to defend as much as some other guys. Then there are guys that maybe aren’t as talented offensively that want to hang their hat on defense and physically impose their will on people. But this team has more firepower and when we get Elijah Thomas back and healthy at the end of December, the frontcourt depth will then be there to say that we have enough depth to play with most people in the ACC.”

The Tigers’ 10-8 conference record might have been good enough to earn an invite to a postseason tournament, but the 17 overall wins and losses to UMass, Minnesota, Alabama and Georgia cost the team the chance to play into late March.

“We want to get off to a better start. For whatever reason we’ve struggled a little bit in non-conference play and haven’t played up to par,” Brownell said. “Sometimes it’s been juggling lineups or figuring out ways we can play better. Last year was certainly one of those seasons where we beat a lot of those teams we were favored to beat, but we let a lot of games get away from us. At Minnesota we let a game get away from us. We didn’t play well at Georgia. We have to play well in the non-conference right from the start. Hopefully the excitement of the home court will draw more people to Littlejohn in November and December and make it a difficult to place to play.”

Blossomgame averaged 18.7 points a game last season and was voted the ACC's most improved player, along with making the All-ACC first team. He flirted with the idea of taking his talents to the NBA a year early, but decided in late spring to return for his senior season.

“It’s important in this league to have guys that command respect, an alpha male figure that can lead your guys through some adversity,” Brownell said. “You know that if you need a basket we can go to this guy and if he gets double-teamed he can make a pass and you can score. He wants to be here and wants to take this team to an NCAA Tournament. It gives our guys confidence an added piece that we know we have a guy that has played as well as anybody in this league.”