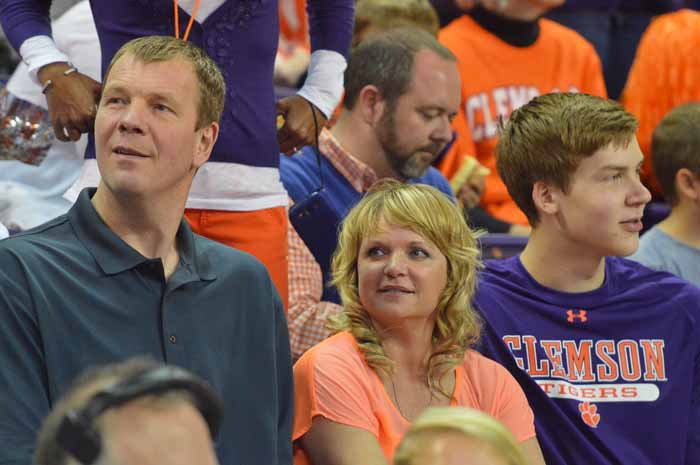 The Smits family sat near the Clemson bench Saturday

Derrik Smits
Center
6-11, 215
Zionsville, IN
View Full Profile may be new to the recruiting process, but lucky for him he has a father that has done it all before.

The 2015 Zionsville (IN) three-star center was on hand for Clemson’s thriller against Pitt Saturday afternoon. Joining him on his trip were his mother and his father - The Dunkin’ Dutchman of NBA fame.

This was the second visit to the Clemson campus for the 6-11, 220-pound prospect, but Smits told TigerNet that he enjoyed getting to really see Clemson’s campus for the first time.

“We got here really late last night, so we just slept,” Smits said recently. “We woke up this morning and went and walked and drove around campus. I really like the campus. It's pretty nice.”

The elder Smits was a star at Marist College, before a 12-year career with the Indiana Pacers, and his son said that it’s nice to have someone with experience to help with the recruiting process.

“It's pretty fun. I like having my dad here. He has more outlook than anyone else when it comes to playing college basketball,” Smits said. “Marist is really the only school that followed him, but he still knows what it's like to play college basketball, so it does help. He knows what to really look for when you're going on visits.”

Despite the Tigers controversial overtime loss Saturday, Smits said he enjoyed the game and was very impressed with the Clemson crowd.

“It was fun. It was a good game,” Smits said. “I'm sad they lost, but it was a good game. The crowd was really good, which made it even more fun. I love playing in front of crowds like this. They always make it a fun game.”

Smits said that he likes the way Brad Brownell

“He's a good coach. All of the guys are hard working,” he said. “He really gets into the game and supports the team. He helps the team get into the game more. Coach Brownell's team plays as a whole. When I play, I want everyone to play together. I like that.”

In addition to Clemson, Smits has offers from Butler and Xavier, but is receiving interest from Minnesota, Indiana, Purdue, Tennessee and Notre Dame.

However, he said that he expects to make a decision before the start of his senior season.