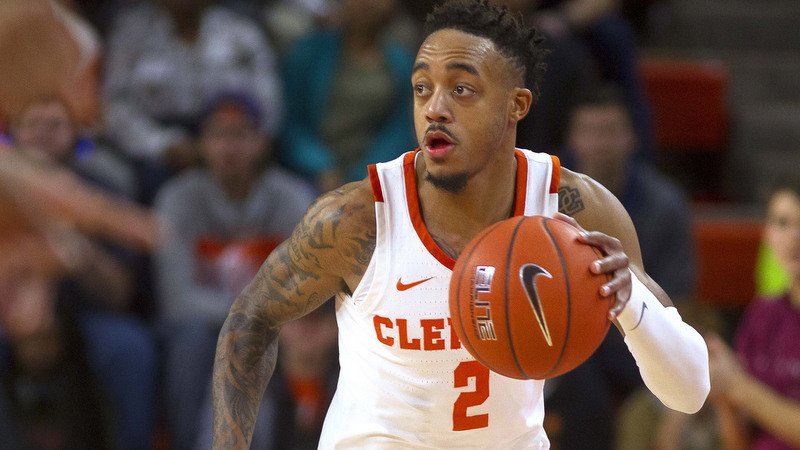 Reed scored a career-high 31 points in the victory over Boston College (Photo by Josh Kelly, USAT)

CLEMSON – Marcquise Reed scored a career-high 31 points and Elijah Thomas had another double-double as Clemson kept its flickering NCAA Tournament hopes alive with a 76-66 victory over Boston College Saturday afternoon at Littlejohn Coliseum.

The victory is the eighth-straight victory over Boston College for the Tigers, and the 18th in 25 tries all-time against the Eagles. The victory broke a three-game losing streak for Clemson.

"A good win for our team today. I thought we played exceptionally well on offense," head coach Brad Brownell said. "We really had good efficiency and good numbers and did what we wanted to do. A good mix of threes and paint touches and handled the zone and the man and did good things that way. Give Boston College a lot of credit. I know they were down a man today. They started the second half strong and made a couple of adjustments, and then we made a couple as well. I was proud of our team. Our team hung in there, and I thought Marcquise was terrific. Aamir really helped us when we were kind of struggling there at the beginning of the second half.

"We are here at the end. There are two weeks for these guys and you want to make sure that they are still competing as hard as they can and that there is a lot out there to play for. We have a good team, but we don't have a great team, and our margin for error is small. But when we do a lot of things well we can play with just about anybody and it takes that."

"I think it started in practice. We had a sense of urgency the last two days in practice," Reed said. "I think the guys came ready to play today. This is a competitive conference and you can't get your head down when you're on a losing streak and get too high when you're on a winning streak."

Reed kept the Tigers out front in the first half. The teams were tied at 16-16 when Reed went on a tear, hitting a layup and then back-to-back 3-pointers as part of an 8-2 Clemson run that put the Tigers ahead 26-18, the largest lead of the half.

The Eagles wouldn’t go away, however, and pulled to within five at 30-25 when Reed hit a stop-and-pop 3-pointer that put Clemson ahead 33-25 with 1:44 to play in the half. The Tigers then got sloppy and the Eagles hit the last four points of the half – including a fallaway jumper in the lane at the buzzer – and Clemson led 33-29 at intermission.

The Eagles’ Ky Bowman scored just three in the first half, but he hit two 3-pointers, and Boston College scored the first 10 points of the second half to take a 39-33 lead (and a 14-0 run since late in the first half). Clemson battled back, however, and Thomas ended the run with a layup. Following another Boston College bucket, Aamir Sims hit a short jumper and then Reed took a steal coast-to-coast for the layup that made it 41-39.

Bowman hit yet another 3-pointer to make it 44-39, but Mitchell hit a 3-pointer of his own and Sims hit two more free throws to tie the score at 44-44. Thomas broke the tie when he bullied his way inside for a layup at the 13:25 mark that gave the Tigers their first lead since early in the second half at 46-44.

Reed hit two free throws, and Thomas hit one to make it 63-60, giving Thomas his 7th double-double of the season and 18th of his career. Reed then took a missed shot and went coast-to-coast, hitting a hanging runner in the lane to make it 65-60. Thirty seconds later, he hit a 3-pointer from the corner that gave Clemson a 68-60 lead with just over two minutes to play.

Reed then picked the pocket of Bowman and was fouled as he went to the basket. He hit both foul shots for a new career-high, and Clemson led 70-60 with 90 seconds left on the game clock.

The Tigers managed to hit their free throws down the stretch, and Clyde Trapp’s thunderous dunk in the final seconds put the exclamation point on the victory.

Clemson returns to action Wednesday night, traveling to Pitt for a 7 pm tipoff. The Tigers return home next Saturday for a 6 pm tip against North Carolina.

Clemson vs. Boston College boxscore
Get the latest Clemson gear right here!
Comment on this story