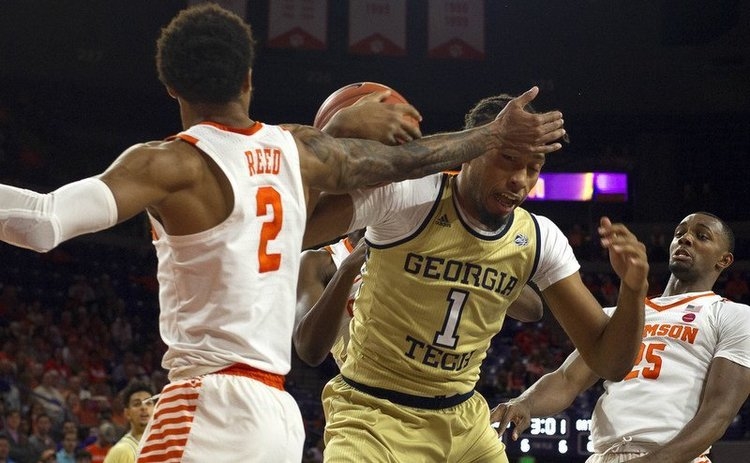 CLEMSON – Clemson needed a fast start and big night from senior guard Marcquise Reed against Georgia Tech Wednesday, and they got both.

Reed scored a career-high 30 points, and Clemson jumped out to early 14-0 and 20-2 leads in defeating Georgia Tech 72-60 Wednesday night in Littlejohn Coliseum, breaking a three-game losing streak and earning the first ACC win of the season.

Elijah Thomas scored 11 points and added nine rebounds while Aamir Sims added 10 points as the only other Tigers in double figures.

Clemson improves to 11-6 overall and 1-3 in the ACC while Tech falls to 10-7 and 2-2. The victory was the fifth consecutive for the Tigers in the series with Tech, and head Brad Brownell is now 15-5 against the Yellow Jackets. The victory was the 160th of Brownell’s career at Clemson and he is just 17 wins shy of tying Cliff Ellis for the most in program history (177).

"Great win for our team. Proud of the way our guys prepared for this," Brownell said. "We knew we wanted to get a win tonight and I thought out seniors were outstanding. Marcquise got going early. The beginning of both halves we were outstanding. A good win against a team that defends well."

"It’s important. He had a couple of tough shooting games and teams are guarding him hard. He jumped up and made shots. Things looked better. Some of the shots we didn't make against Virginia we made today. We had some balls go in."

Clemson eventually pushed the lead to 20-2 on a Javan White dunk at the 12:20 mark, but Georgia Tech began to show fight on the defensive end and began to claw back in the game. The Yellow Jackets went on a 16-9 over the next seven minutes to pull within 29-18, but the Tigers pushed back and used a David Skara 3-pointer and two free throws by Reed to make it 35-20.

However, the Tigers were held scoreless over the final two-plus minutes of the half and Tech went on a 10-0 run to close out the first stanza, and Clemson held a 35-30 lead at intermission.

The Tigers started out the second half almost as hot as they started the first half. Thomas started the proceedings with a dunk, and his lone free throw two minutes later concluded a 7-0 run to start the half that gave Clemson a 42-30 advantage. Skara later hit a 3-pointer, and the lead was back to 15 at 50-35 at the 13:07 mark.

The Tigers kept a working margin of double digits over the next 10 minutes, keeping the Jackets at bay. However, the Jackets weren’t done. A Thomas layup at the 4:13 mark gave Clemson a 62-47 lead, but the Jackets went on a 6-0 run over the next 90 seconds and pulled to within nine at 62-53 with just three minutes to play.

Brownell called a timeout, and the Tigers got the ball in the hands of Reed, who was fouled near the free throw line. That foul put the Tigers in the bonus and Reed hit both to tie his career-high with 28 points as Clemson led 64-53.

Reed was fouled with 1:34 to play, and his two free throws not only gave him a career-high but also gave Clemson a 68-56 lead with 1:35 to play in the contest. The Tigers held off Tech the rest of the way to earn the win.

"Give Clemson a little credit. Coach Brownell and his team played really well," Georgia Tech head coach Josh Pastner said. "I knew this was a scary game, just from the numbers they had coming in. I knew they would get going. They have the entire team back from Sweet 16 team, so I knew they would get going but I hoped it would be the next game. I knew it would be tough. We got punched early and we didn’t punch back right away and we dug ourselves that hole. The difference is the way we started the first and second half."

Clemson plays at Florida St. next Tuesday with tipoff scheduled for 7 pm. The next home game will be January 29th against Pittsburgh in a 9 pm tipoff.

Clemson vs. GT boxscore
Get your Trevor Lawrence and Travis Etienne Jaguars gear right here!
Comment on this story