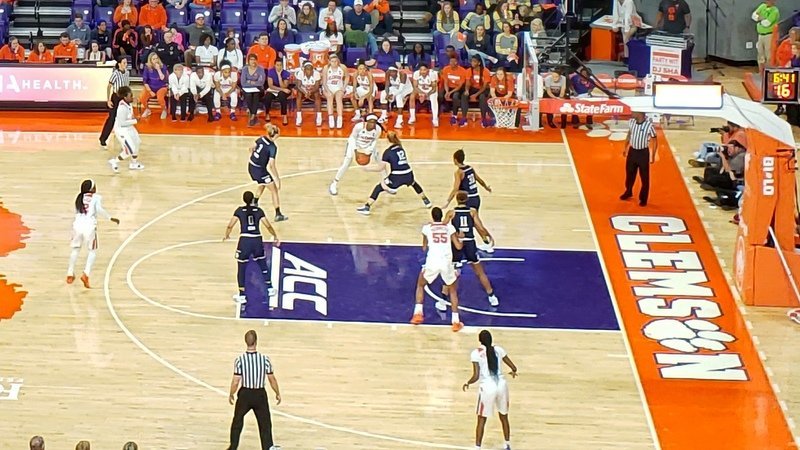 Notre Dame was hard to handle in the paint Thursday night

CLEMSON – Turnovers and giving up too many points in the paint doomed Clemson against No. 5 Notre Dame.

While the outcome wasn’t what Clemson wanted, the improvement on the court is easy to see. In 2018, Notre Dame beat Clemson 90-37. This is the sixth time this season - and the second time in ACC play - that Notre Dame has scored 100 or more points. Prior to Thursday's game the most points Clemson had given up was 84 to No. 14 Syracuse.

Senior Aliyah Collier was 9-of-17 shooting and 4-of-6 from beyond the arc and led Clemson with 22 points. Kobi Thornton added 16 points.

Notre Dame was led by Arike Ogunbowale with 23 points and had five players in double digits.

Clemson’s Destiny Thomas scored the first points of the game with a fast break layup to give the Tigers an early 2-0 lead, but it was all Notre Dame for the next four minutes.

The Tigers and Irish traded baskets for the remainder of the quarter as Notre Dame claimed a 32-18 lead after the first stanza.

Clemson isn’t known as a three-point shooting team but the Tigers went 3-of-5 from beyond the arc in a fast-paced second quarter. Aliyah Collier hit a pair of treys and Destiny Thomas added one of her own.

Clemson’s offense came alive during with an 11-2 run started by a Collier three and layup and ended with a pair of baskets by Kobi Thornton to cut Notre Dame’s lead to 44-37 with 2:05 to play before halftime.

Notre Dame scored the final five points of the second period for a 49-37 lead at intermission.

The Irish began the third period much like it ended the second, scoring eight unanswered to open a 57-37 lead with 8:39 to play in the period.

Thornton ended the Irish run with a jumper from the lane to make it a 57-39 game but it was all Notre Dame for the rest of the third quarter as the Irish led 83-50 heading into the final period.

Clemson returns to action Saturday at 2 p.m. hosting No. 3 Louisville.