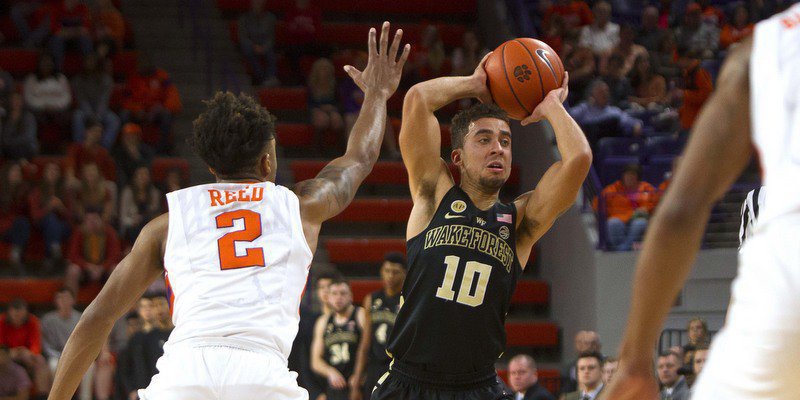 Robertin is greeted by his teammates after an early dunk (Photo by Joshua S. Kelly, USAT)

CLEMSON – There wasn’t a lot of love lost between Clemson and Wake Forest on Valentine’s night in Littlejohn Coliseum.

Clemson survived a foul-clogged, high-scoring affair in defeating the Demon Deacons 95-83, tying a season-high in points and setting season-highs in free throws made and attempted (27-35). Three players fouled out, two were called for technical fouls and the teams combined for 48 total fouls, with Wake Forest being whistled for 29 of those fouls.

The 95 points was the most points scored in an ACC game under head coach Brad Brownell.

Marcquise Reed tied a season-high with 21 points – set against Wake Forest earlier this season – while Jaron Blossomgame added 17 points and ten rebounds. Shelton Mitchell and Avry Holmes each added 15 points for the Tigers, who improve to 14-11 overall and 4-9 in the ACC.

Blossomgame passed Sharrod Ford for ninth place in Clemson history in rebounds. He now has 771 in his career.

Wake used a Crawford 3-pointer to make it 87-81 Clemson with 1:17 to play, but the Tigers hit their final eight free throws to hang on for the win.

The Tigers have won the last four meetings in the series and six straight at home over Wake Forest, the sixth-longest home winning streak over an ACC foe in program history. 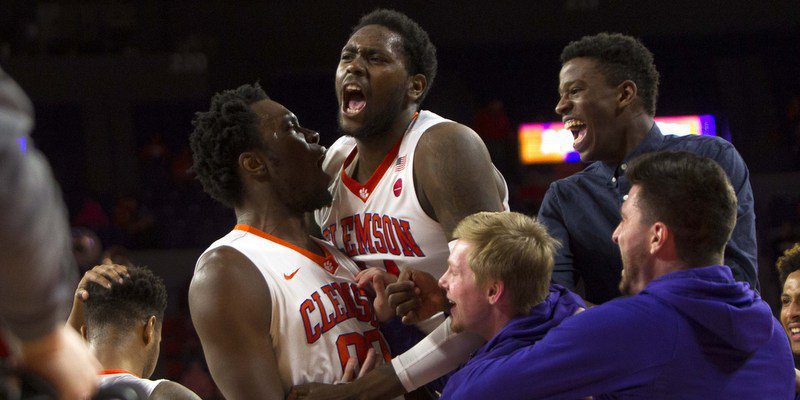 Robertin is greeted by his teammates after an early dunk (Photo by Joshua S. Kelly, USAT)"

“This was a good win for our guys. I thought we played well tonight in a lot of areas," Brownell said. "Defensively, in the first half, I thought we were pretty good. The first eight minutes, maybe not as good as we would’ve liked, but the last 12, we did a lot of really good things. We played pretty well offensively. Maybe had a little bit of an offensive drought there in the second half. It’s harder playing with a lead like that sometimes. I think the other team can be aggressive and attack you, and there’s not nearly as much pressure to shoot. Wake really played well in the second half; they were hard to guard.

"I’m really proud of Legend (Robertin) for giving us some good minutes off the bench. I thought he really gave us a spark. And, again, I’m just really happy for my team. My team has been competing really hard the last couple of weeks, especially last week. We didn’t get any wins, so it’s nice for my team to enjoy a win tonight. I thought we had a lot of guys play well, so it was a good team victory."

“There have been no signs in practice that our guys aren’t still competing and working hard and trying to hang it there, but I think it speaks to the character of our guys," he said. "It’s harder than people realize. You pour so much into every game. For 48 or 72 hours, you’re getting prepped on a team, and, then, play your guts out and lose on a last-second shot or miss a shot to win a game. There’s an emotional toll that plays over the course of a long season, and there’s no question that it can drain you physically, as well. Emotionally, it’s hard to keep your battery recharged. It helps up to have depth. That gives your team energy, so I think that really has helped us.”

The teams traded baskets in the early going, with five ties and three lead changes in the first ten minutes. With the score knotted at 17 apiece, the Tigers started to pull away. A 3-pointer by Blossomgame started the run, but early foul trouble sent both Eli Thomas and Sidy Djitte to the bench.

Enter Legend Robertin, who provided six crucial minutes off the bench. His dunk with just under four minutes to play put Clemson up 39-28 and the Tigers finished the half on a 19-6 run. Blossomgame hit another jumper with eight seconds remaining, and Clemson took a 46-32 lead into intermission.

An 8-2 run to start the second half gave Clemson its biggest lead of the game to that point at 54-34, but the Deacons began to chip away at the lead and trailed by just 14 with a little over 12 minutes to play.

The Demon Deacons cut further into the lead after a skirmish with 7:44 to play. With Wake trailing 74-60, Thomas committed a personal foul and then was called for a technical foul by official Teddy Valentine. That gave Thomas five fouls, and he departed the game with just eight points.

The teams traded free throws, and Wake promptly scored five in a row to pull back within single digits at 76-67 with 5:50 to play.

Blossomgame ended the run with a short jumper that made it 78-67, and he then made a play on the defensive end, intercepting a pass and taking it the other way. Before he reached the basket, however, he was tackled by Keyshawn Woods, who was called for an intentional foul.

Blossomgame missed both free throws, however, and Wake turned it into points on the other end, and it was 78-69 with 4:18 remaining on the game clock. Robertin’s dunk with just over three minutes to play put Clemson back up by 12 at 85-73. However, Wake’s Crawford made it 85-76 with 2:22 to play in the game.

Djitte fouled out 39 seconds later after he hit two free throws to put Clemson back up by 11 at 87-76, and Collins hit both free throws to make it 87-78 with 1:30 to play. The Demon Deacons stole the inbounds pass, and Crawford drained a long 3-pointer that made it 87-81 Clemson with 1:18 on the game clock.

Clemson returns to action Saturday, playing at Miami in a noon tipoff.

* Clemson swept the season series with Wake Forest for the first time since 2011-12, and for the 11th time in history (trailing only the 12 sweeps vs. Virginia).

* The Tigers have now won six straight home games against Wake Forest, tying the program’s longest against the Demon Deacons (1985-90) and fourth-longest overall.

* Clemson won on Valentine’s Day for the 25th time, most wins of any calendar date in program history. The Tigers are now 18-4 all-time at home on February 14.

* Clemson scored 95 points, its ACC high under Brad Brownell. The point total was Clemson’s highest since the 2007-08 season in a double overtime win over Florida State (97). It was the highest total in a regulation length ACC game since also scoring 95 on Senior Day in 2006 against Georgia Tech.

* Clemson shot 59 percent in the first half, its highest figure in any half this season.

* The Tigers have just 25 turnovers over the last three games, and have been at 10 or less each game.

* Jaron Blossomgame scored double figures for the 23rd time this season, and 78th time in his decorated career.

* Blossomgame’s double-double was his third of the season, his first in ACC play. He now has 15 in his career.

* In two games against Wake Forest this season, Marcquise Reed scored 21 points in both. On Tuesday, he hit a career-best nine free throws.

* Shelton Mitchell scored double figures for the fifth time in Clemson’s last six games. Mitchell is averaging 12.5 points per game over the stretch.

* Legend Robertin scored his first field goal against an ACC opponent since the Florida State game last season; he put in two dunks for a total of four points.