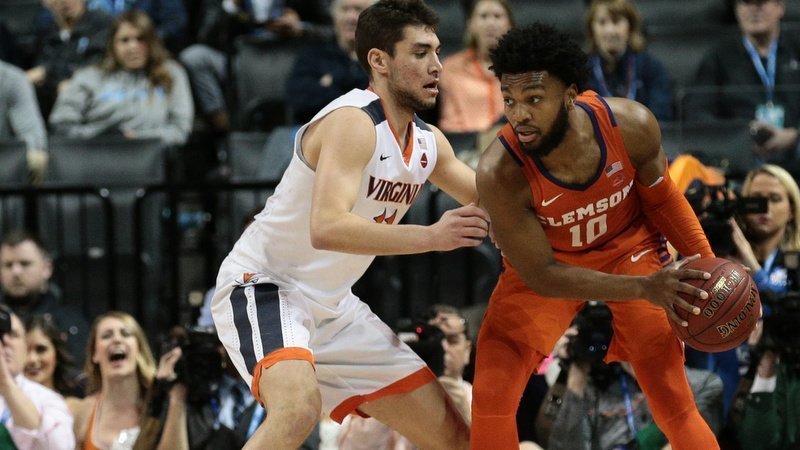 Virginia is ranked number one for a reason, and they proved why Friday night.

The Cavaliers overcame an early seven-point deficit and used a 16-0 first-half run on the way to beating fourth-seeded Clemson 64-58 in the semifinals of the ACC Tournament at the Barclays Center in Brooklyn.

Virginia advances to Saturday’s ACC Tournament Championship, where they will face the winner of Friday night’s game between Duke and North Carolina. Clemson will head home to watch Sunday’s NCAA selection show to find out their destination and seed in the NCAA Tournament.

Clemson was led by Shelton Mitchell with 18 points and Elijah Thomas’ 15 points. The Tigers hit 17-of-21 free throws. Marcquise Reed and Gabe DeVoe each struggled, with DeVoe scoring eight and Reed six.

The Cavaliers improved to 30-2 overall and Clemson dropped to 23-9.

"Well, congratulations to Virginia. I thought they did the things they needed to do to win," head coach Brad Brownell said. "Extremely proud of our guys. I thought we competed at a really high level today. I thought defensively we really matched them in terms of being able to make things difficult. Credit some of their under-the-radar guys like Jack Salt, who made some big plays late in some shot clocks, a couple tip-ins, short shots, and then obviously the stretch in the first half where we had trouble scoring was really the difference. Eli got the second foul and went to the bench and we didn't play as well with him not in there today.

Virginia head coach Tony Bennett was complimentary of the Tigers.

"They're a good team, and I think Brad has done a terrific job without Grantham," Bennett said. "And the first time we played them was the very first game they were without Grantham, and I think now they're comfortable in their roles, and their roles are very aggressive off the dribble. They spread the floor and attacked us. We were on the edge with our transition D and Thomas did a heck of a job on the interior. They were the aggressors. We were kind of a little on our heels, not for a lack of effort, but then I thought the guys really buckled down. I thought Jack gave us some good stops, Ty, and I think our team defense picked up. And they're not going to make every shot, so we bothered some shots, and then some of our shots started falling."

The Tigers played well early. Virginia led 13-12 with just over 12 minutes to play in the half when David Skara hit a layup that put the Tigers ahead 14-13. That was the beginning of an 8-0 run that ended with a layup by DeVoe that gave the Tigers a 20-13 lead.

The Tigers went cold at that point and the Cavaliers went on a 16-0 run over the next eight minutes. Clemson failed to hit open shots and didn’t play well on the offensive end and the Cavaliers jumped in front 29-20 with just over a minute to play. Mitchell hit three free throws to make it 29-23, but Virginia hit another 3-pointer before the end of the half and led 32-23 at intermission.

The Tigers got an old-fashioned 3-point play from Thomas early in the second half and trailed by just four at 34-30. That was when the Cavaliers went on another big run as the Tigers started turning the ball over. Virginia went on a 10-0 run and extended their advantage to 14 at 44-30.

Thomas stopped the run with another basket and Skara hit two free throws that made it 44-34.

The Cavaliers pushed the lead back to 12 but the Tigers finally found their range. Mitchell hit two free throws and a 3-pointer that made it 46-39 and the teams began to trade baskets. Reed hit a 3-pointer that brought Clemson to within six at 54-48, and Clemson made it 62-58 with 13 seconds remaining on a pair of Aamir Sims free throws.

DeVoe said he was ready for the next step in the season - the NCAA Tournament.

"I mean, I'm super excited. This is my first time having this opportunity to go to the tournament, and it's huge for me," DeVoe said. "The locker room, the guys are really excited, and I think we're going to have a lot of confidence going forward into the tournament, as well."

"Yeah, we're obviously extremely excited about this opportunity. We've worked really hard, not just this season but as a program to put ourselves in a better position to be able to do it more often. It's hard in this league," he said. "You talk to a lot of us that aren't at some of the blue blood schools, and it's a battle every time to do this, so we certainly feel thankful and blessed that it's going to happen. But we know how hard we've worked this year and really the last couple years to kind of make this a reality. I'm as happy as I can be for guys like Gabe. I'm disappointed for Donte because it was something that we kind of set out to do this year. It was kind of our mission. And I do feel confident with our team. I think we're playing pretty good basketball. I thought we got better this weekend."

Clemson vs. Virginia box
Get the latest Clemson gear right here!
Comment on this story