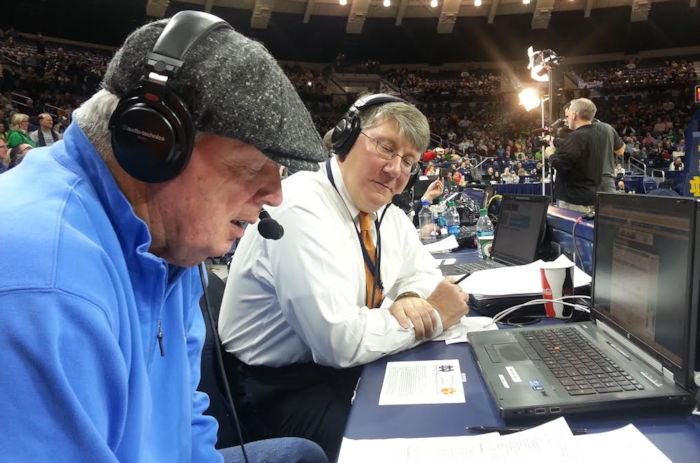 The game is special in that it will be played between the two schools that played the biggest parts in Bourret’s life – he has been at Clemson for 37 years in the sports information department but earned his undergraduate degree from Notre Dame in business administration in 1977. He also earned his master's degree in communication arts from Notre Dame in August of 1978.

It will also be his 1000th radio broadcast of Clemson basketball, and the fact that it comes when the Tigers and the Fighting Irish are on the court makes it even more special. With that in mind, TigerNet asked Bourret about No. 1000, how it all started and what it was like to work with former Clemson play-by-play man Jim Phillips.

How did you start out doing color for Clemson basketball?

“The '78-'79 season was my first year at Clemson, and I did two games that year. We played in the Sun Bowl Carnival in El Paso, Texas. What happened was Jerry Arp, who was the sports promotion direction then and he used to do the color for basketball - and we were playing Ohio St. in the Gator Bowl. In addition to being the promotions director he also was involved in promoting the sport of football. So they thought his time would be better well spent hanging around the national football media and Woody Hayes at the Gator Bowl. When it was determined he wouldn't go to the basketball games in El Paso - and in those days I was Philip Sikes and I was Mr. Basketball - they asked if I would sit in with Jim Phillips and do the games with him.

“In those days, the home radio network didn't get to do the bowl game. Jim Phillips never did the Orange Bowl. It was contracted out to these national radio networks to do. It was ridiculous, but that is the way it was back then. So since Jim couldn't do the game on the radio, he went to El Paso with the basketball team. The first night, we beat El Paso, which was kind of an upset, and on the second night while the football game was going on, the basketball game was going on against Texas A&M. The championship game of the Sun Bowl Carnival, and Derrick Johnson hits a shot with four seconds left to win the game for us, 58-57 I think it was. So we are in the commercial to go into the postgame show, and all of a sudden the guy who was back at the station who was running the board just yells out, "He hit him! He hit him!" And Jim Phillips and I looked at each other like, "Who hit whom? What are you talking about?" He said, "Woody Hayes just slugged a Clemson guy!"

“And we were like yeah, sure. And so we kind of didn't say much about in the first segment of the postgame, but more and more he says he did and there was a big fight on the field. We had no television in front us, and we were trying to describe it. It made for an interesting second broadcast. So anyway, I did just those two games in 1978-79, and in 1979-80 I did all of the road games. So I did the road games and ACC Tournament and the NCAA Tournament and the run to the Elite Eight. And then in 1981 I started doing all of the games.”

When did you first realize you could get to 1000?

Does it make it more special that the game is against Notre Dame?

Oh yeah, by a mile. Yes it does. These are the two schools I have been significantly involved with. As a student at Notre Dame, I never missed a home game in five years including grad school. I was working in sports information for basketball and I got to go to the Final Four and have remained close friends with Digger Phelps and I've written a couple of books with him, so that program is very special to me and so is Clemson after working here for 37 years and all the great coaches and players I've gotten to work with. It's kind of neat.”

What was it like working with the late Jim Phillips

“It was great. It was so easy and he taught me a lot about when to talk and when not to talk. We had a deal where I used to try and say what I was going to say when the ball was in the backcourt or immediately after a score was made and when the flow of play was going. He was the consummate professional and he had a way about him that was at ease and he was confident in what he was doing. He was great to work with. I figured out on the plane one night that I did 670 games with him between 1978 and 2003. So 670 of the now 999 are with him.”

Any other statistical oddities with the 1000?

“I will put this in just for Cobb Oxford, because he asked me on Facebook. Clemson is 546-453 with me calling the games. It would be great if I got 547 tomorrow night. It's been something I've really enjoyed and it's been a lot of fun and I think about all of the great players I have seen play. Not just Clemson but in the ACC is pretty amazing.”