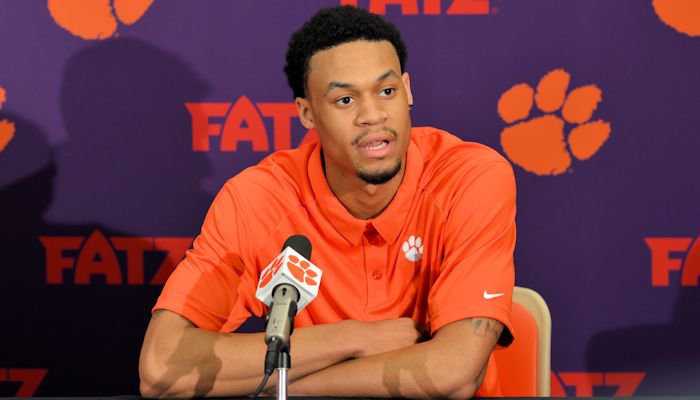 McDaniels averaged 17.1 points, 7.1 rebounds per game, while adding 100 blocks this past season.

CLEMSON – Living out your dream should be an easy decision, but for K.J. McDaniels

K.J. McDaniels
Jr. Forward
#32 6-6, 200
Birmingham, AL
View Full Profile the decision to leave Clemson a year early was more difficult than he ever could have expected.

The Birmingham native and ACC Defensive Player of the Year had a standout junior campaign averaging 17.1 points, 7.1 rebounds per game, while adding 100 blocks, giving him the opportunity to declare for the NBA Draft a year early.

McDaniels has mulled over his decision for quite sometime, but in the end an opportunity to chase a life long dream was too much to pass up.

“I finally came to peace with it probably last week,” McDaniels said Wednesday during his final press conference at Clemson. “It took a lot of thought. It’s something that I’ve been chasing after, but I felt like it was time to go and chase the dream.”

What was keeping him from realizing that dream? The Clemson family and all that it encompasses.

“My teammates were great to me,” McDaniels said. "They understood what I’ve gone through. I’ve never had a game or been selfish like that toward my teammates. I thank my teammates, too. It was a difficult decision. There was never a game where I said, ‘I’m gone.’. My teammates, the Clemson family and how much Clemson appreciated me and showed their appreciation. I love Clemson for that.”

With such a difficult decision at hand, McDaniels took the opportunity to reach out to a former Clemson star as well as spend lots of time talking to his family.

“I actually spoke with Trevor Booker

Trevor Booker
Forward (2006 - 2009)
#35 6-7, 240
Whitmire, SC
View Full Profile about my decision and he helped me out a lot,” McDaniels said. “He said that if you feel like you’re ready to go chase your dream. It’s something that I’ve been wanting for a long time –ever since I got to Clemson. This has been a great transition and a great experience for me. My mom helped me out a lot with it. It’s a dream come true. I’m happy for my coaches who helped me get this far.”

After all was said and done McDaniels knew that this is his time.

Despite making the move to the NBA, McDaniels knows the hard work is far from over.

Brad Brownell
Head Coach
View Full Profile are losing McDaniels, Brownell knows that having a player of his stature will only help Clemson in the future.

“First off, it’s a great for Clemson basketball,” Brownell said. “Any time you help one of your players realize a dream it’s special. That’s what we’re in the business of doing – preparing young men for the future. I couldn’t be more proud of K.J. and they way he’s carried himself and conducted himself for the last three years. He has been a model player.

“It’s been unbelievable for our coaching staff to develop as quickly as he has. He’s a sponge. He wants to learn. He’s an incredibly hard worker. Humble. Always put the team first. I think he did a phenomenal job this season in the midst of all of his popularity of always talking about the team. He has been a great example for our young players. I’m very happy for him. I’m excited for him. This is one of the things that we want to do as coaches here is we want to send guys to the NBA. K.J. is ready and he’s excited about it. We’re extremely excited for him as a basketball family.”