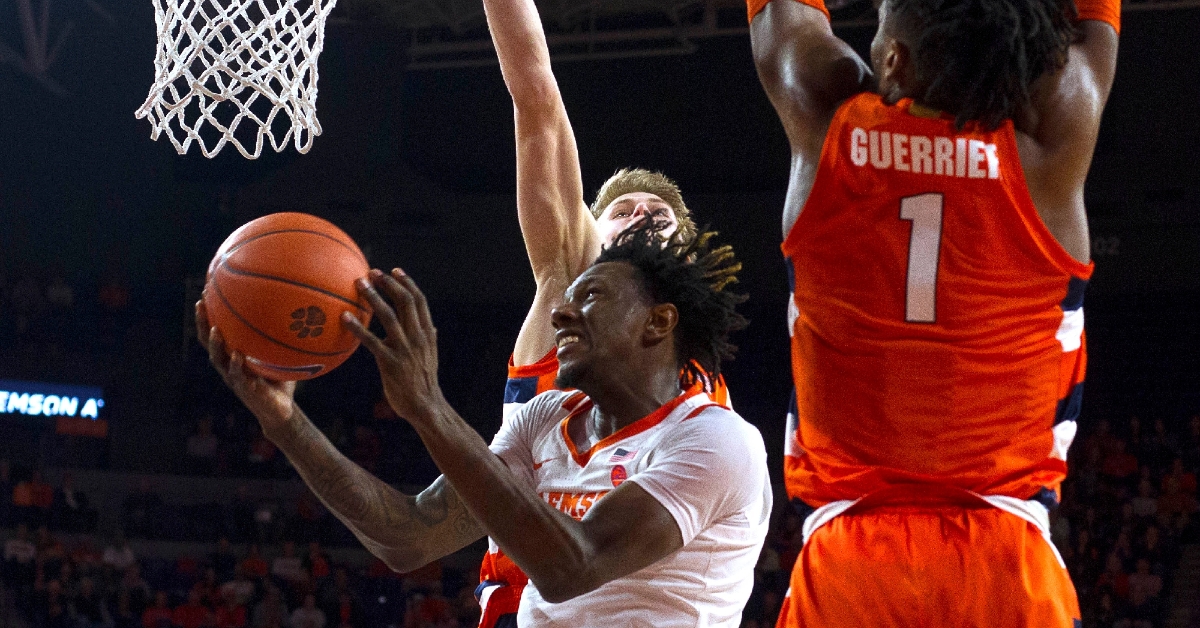 CLEMSON – Tevin Mack and Clyde Trapp each scored career-highs and Trapp’s basket with just over two seconds remaining lifted Clemson to a 71-70 victory over Syracuse at Littlejohn Coliseum Tuesday night.

Syracuse held a 70-69 lead and the ball with 11 seconds left on the clock. The Orange were forced to inbound the ball, but Elijah Hughes’ shot on the rim bounced into the hands of Khavon Moore. Moore drove down the court and delivered a sweet pass to Trapp, who touched the ball off the glass with 2.5 seconds remaining.

The Orange attempted a long inbounds pass that was knocked out of bounds by Mack with 0.9 seconds remaining, but a long 3-pointer by Hughes fell short as Clemson handed Syracuse its first road loss. Hughes and Buddy Boeheim each scored 22 points for the Orange.

"What a great game. I'm really proud of our guys. It was a game of runs," head coach Brad Brownell said. "Syracuse made adjustments after we got off to a great start. They were outstanding late in the first half. Our guys rallied and got back in the game. We had a couple of bad possessions the last few minutes. Our defense won us the game in the second half. Our defense was outstanding."

Brownell said the game-winning play was one the Tigers have used before.

"It was a tremendous play we've used late in a couple of games now," he said. "Khavon [Moore] can definitely guard guards. When he got the rebound, I saw him bring it up. The best thing we can do is play well in the transition game and beat the zone. That was an unbelievable finish by Clyde [Trapp]."

"I thought we played a good game. We had a dead spot in the second half, and we didn't get that many trips down the floor," Boeheim said. "We just made some mistakes you can't make. Clemson is a good team, a good defensive team. It's not that easy to play against them."

The first half featured a lot of 3-pointers and a big run by the Orange. Clyde Trapp and John Newman each hit a 3-pointer as the Tigers opened a quick 6-0 lead against the Syracuse zone. A Newman jumper at the 13-minute mark gave the Tigers their biggest lead of the first half at 15-6.

The Orange began to chip away, however. Trailing 17-11 Syracuse went on a 14-3 run over the next five minutes to take a 25-20 lead with 5:21 to play in the first half. A Newman layup and a Mack short jumper in the lane got the Tigers back in it, and Curran Scott’s 3-pointer two minutes later tied the game at 27-27. Al-Amir Dawes and the Orange’s Buddy Boeheim traded a pair of 3-pointers to end the half and Syracuse led 35-33 at intermission.

The half marked the third consecutive contest in which Aamir Simms was held scoreless in the first half. Clemson was 7-of-17 from beyond the arc (41.2 percent) in the half.

The Tigers got off to a bad start in the second half. The Tigers turned the ball over three times early and the Orange scored eight of the first 10 points to take a 45-35 lead just 3 ½ minutes into the half. Trapp drained a 3-pointer, however, and the Tigers climbed back to within seven at 45-38, and Trapp then drained a long 3-pointer coming out of a timeout to make it 45-41.

On the ensuing trip down the court, Boeheim drained a 3-pointer and Trapp was called for a flagrant foul under the basket. The Orange hit both free throws and took the 50-41 lead with just over 14 minutes to play.

Then the Mack show began. The Tigers went on a 12-2 run over the next five minutes and Mack scored 10 of the points as the Clemson regained the lead at 53-52 with 9:19 to play. The Orange took advantage of a terrible call on Mack and used four straight free throws to take a 56-53 lead, but Mack hit a short jumper to bring Clemson to within one at 56-55 at the 8:14 mark.

Mack then hit a turnaround jumper in the lane (out of the under-8 timeout) and then hit another 30 seconds later, forcing Syracuse to call a timeout with Clemson leading 59-56 with 7:03 to play.

The Orange eventually led 65-62 but Mack scored five straight points for the Tigers on a 5-2 run to make 67-67 with 1:58 to play. Joseph Girard hit a 3-pointer from downtown Seneca to make it 70-67 Orange, but Simms scored his first points of the night on a lefthander in the lane to make it 70-69. Clemson had a chance to take the lead on the ensuing possession, but Simms turned it over back to the Orange.

Clemson now takes to the road over the next two contests. The Tigers take on Wake Forest in Winston-Salem Saturday at 8 pm and then travel to Virginia four days later in a 7 pm tipoff.

Clemson vs. Syracuse boxscore
Get the latest Clemson gear right here!
Comment on this story