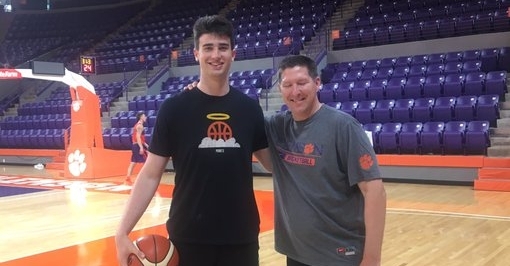 A local big man is staying in touch with the Tigers.

Walhalla native Gabe Wiznitzer (6-11) has seen his recruiting somewhat stymied by Covid-19. He has picked up more offers with Pitt and Virginia Tech the latest two, but of course, he’s not able to take visits and that will prolong the process for him. In the meantime, he’s talking to coaches from schools that have offered and thinking about his official visits.

Clemson has offered and he’s hearing regularly from the Tigers.

“I’ve been talking to Coach (Dick) Bender, pretty much that’s it, nothing’s really changed a lot. I’ve just been talking to him on a weekly basis,” Wiznitzer said. “He just continues to keep in touch with me. He’s just telling me they want to bring me up on an official whenever I can. He just talks about that.”

Wiznitzer said lining up those official visits remains a work in progress.

“I haven’t narrowed down my exact list, but I’m pretty sure I’m going to hit Iowa for sure, Cincinnati for sure, possibly Virginia Tech,” Wiznitzer. “I’m still not completely sure. I really want to see who continues to keep in touch with me as the summer goes by, who really makes me a priority. It’s hard to say right now because there are a lot of new schools that are in the mix. Seton Hall has contacted me. Illinois. Kansas State. By the time the season starts, I’ll definitely be cutting my list.”

From Clemson's standpoint, it would be easy for Wiznitzer to make the sure ride to campus for an official visit. But as he does his evaluations, he’s hesitant to commit on a trip to see the Tigers again.

“I really don’t know right now,” Wiznitzer said. “There’s a chance, but there’s not a huge chance right now. Honestly, they are not super high on my list right now just due to some reasons like playing style and stuff like that. I think I may take an official but I’m not 100% sure. There are definitely some other schools where I fit the playing style better. But I have a really good relationship with Coach Bender, so there’s definitely a chance I could visit because I have a really good relationship with that staff.”

Wiznitzer adds that what he’s looking for is a scheme where the big-man plays a bigger role inside and not a place where the game is dominated by three-point shooting.

“I think a team that puts the focal point on their big,” he said. “Like, for instance, how Iowa played this year. How Ohio State plays. How they focus on really pounding the ball inside and playing inside-out. I just think that caters to my game really well. But there are some things Clemson does that fit me really well as well.”

Wiznitzer said he’s looking at around Christmas time for a possible decision, though that’s flexible. It does appear now he will not sign until April.

Last season at Hargrave Prep, VA, Wiznitzer averaged 13 points and 10 rebounds per game. He’s a four-star prospect in the 247Sports Composite and ranked the 25th best power forward in the country.