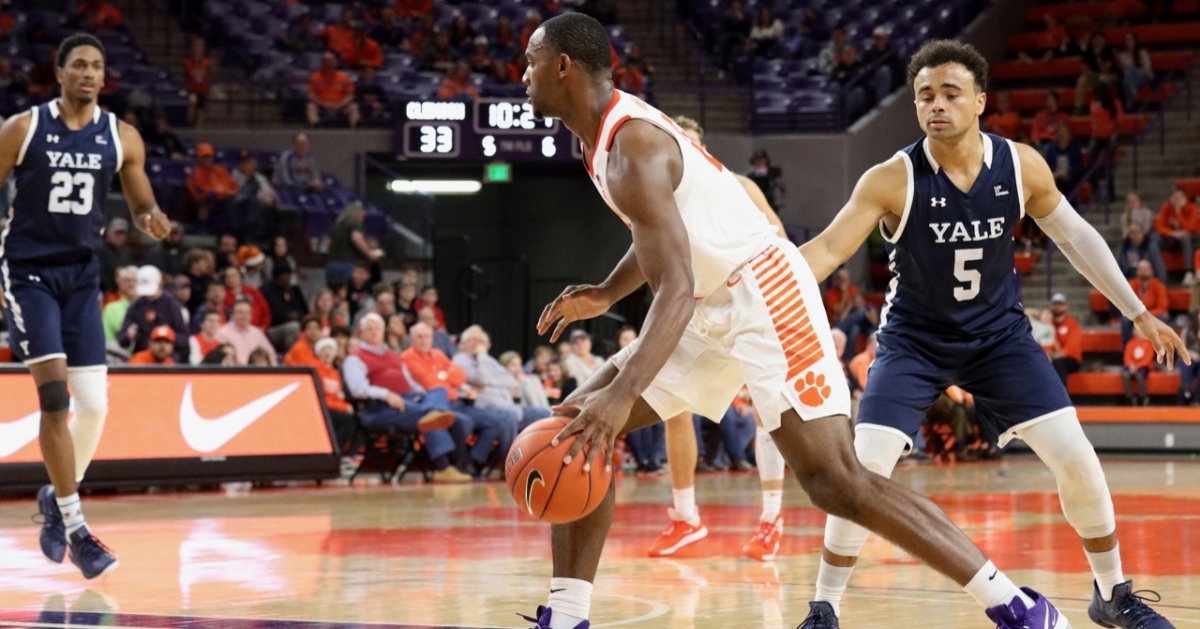 CLEMSON – Lacking a true inside presence this season, Clemson needs to shoot well from distance to win games. Sunday’s cold-shooting effort didn’t get it done.

Yale pulled away late and took advantage of Clemson’s woes from 3-point range to win its seventh-straight game in defeating Clemson 54-45 Sunday afternoon in front of a sparse crowd at Littlejohn Coliseum. Yale improves to 10-3 on the season while Clemson falls to 6-6.

"Frustrated is the word for this loss. I'm really anxious to watch the film," head coach Brad Brownell said. "I think as the game wore on, our guys got too tight. I thought we defended really well. We took a very good offensive team and held them to 54 points. Unfortunately. we really struggled to score."

Clemson trailed Yale 42-40 with just over five minutes to play but hit just two free throws and was 0-for-6 from the field over the next four minutes in another crippling cold spell that cost them a game. When Yale splashed a 3-pointer from the corner with 11 seconds remaining to take a 54-45 lead, it marked a 12-5 run to end the game as Clemson hit just one of its seven final field goals.

"It's disappointing because of how well we competed defensively," Brownell said. "We didn't want to double [Paul] Atkinson all the time. He was a problem, and that might've been the difference in the game because Yale had a guy to go to in the paint."

The first half was a half of runs. It was also a half that both teams would probably like to forget. Yale jumped out to a quick 7-2 lead but the Tigers went on an 11-1 run over the next 6:28 to take a 13-8 lead. The Bulldogs came roaring back and scored the next eight points to take a 16-13 lead with just over five minutes to play in the half.

However, Yale finished the half on an 8-0 run and led the Tigers 23-19 at intermission.

Clemson started the second half on a 6-0 run, with Hunter Tyson splashing a 3-pointer for a 25-24 Clemson lead with just over 17 minutes to play. That 3-pointer was Clemson’s first of the game after an 0-for-10 start.

Clemson went on a 10-0 run over the next four minutes that started with a Khavon Moore 3-pointer and was helped along by the Bulldogs’ foul trouble. Yale committed its seventh foul of the half with just over 11 minutes to play, putting Clemson in the bonus, and the Tigers followed the Moore 3-pointer with seven free throws to take a 38-36 lead at the 8:55 mark.

Another run followed, this one by the Bulldogs. Clemson once again began to struggle from the field and the Bulldogs took advantage with an 11-3 run that put them ahead 47-41 with just over three minutes to play. Yale had a chance to extend the lead even further, but an offensive foul on Yale put Simms at the line shooting two with 2:59 to play in the contest.

Simms hit one of the free throws and Yale led 47-42 with 2:50 left on the game clock. The Tigers needed a stop and got it when Tyson stepped in front of a lazy pass with 2:30 to play, but a layup was missed on the other end and Yale brought the ball back down the court and called a timeout with the five-point lead with 1:56 to play.

Clemson will return to ACC play on New Year’s Eve. The Tigers will host Miami in a 4 p.m. tipoff on the ACC Network. The Tigers started the season 0-2 in ACC play with losses to Virginia Tech and Florida St.

Clemson vs Yale Box Score
Get the latest Clemson gear right here!
Comment on this story