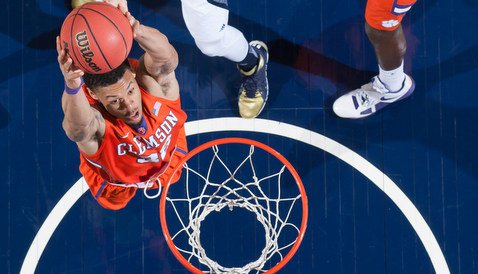 McDaniels averaged 17.1 points, 7.1 rebounds and had an even 100 blocks this season as he finished his junior season with first-team all-ACC honors and was also named ACC Defensive Player of the Year. He has signed with Rivals Sports Group, Premier Sports Management.

TigerNet spoke with K.J.’s mother – Shawn McDaniels – and she said that while her son has grappled with his decision, his mind has been made up for a few weeks.

“We are really excited for K.J. It’s hard for me to grasp that my baby is growing up,” Shawn said. “His dad and I are totally supportive of this move. His dad told him he still has some developing to do, but he will have to do it at the next level. K.J. loves Coach (Brad) Brownell and he loves his teammates, and he is a loyal person. It was a tough decision for him to make.”

She said that K.J. only has 10 semester hours remaining before he graduates, and he will come back to Clemson next summer to complete his degree. She said that David Gebbia of Rivals Sports told her the group would make sure that K.J. completes his degree.

Several mock drafts have McDaniels in the mid-to-late first round, and she said that was what the family is hearing from the NBA.

“Yes, we are hearing somewhere around 19,” Shawn said. “When you go up that high, it really isn’t something that you can pass up. There is a small window of opportunity there, and if you don’t take it then it could be closed for you. You could get injured, and then you don’t know what the next year could hold.”

She then said that this decision is one of the hardest the family has ever made.

“It’s life-changing, unreal, something like a dream come true with a decision like this,” she said. “In choosing whether to go to Alabama or Auburn or Clemson or Florida, it wasn’t that big a decision because we knew we would see him every weekend. We knew he would still be a part of the family, and he would have his bedroom at home. But this decision is ten times bigger than we thought it would be. It is like getting married or having a baby.”

“K.J. inherited his dad’s basketball talent,” she said. “You should have seen him in college. People who knew him said he could have played in the NBA, but he didn’t have the right people behind him. K.J. inherited his dad’s talent, and then he surpassed his dad’s talent when he went to Clemson. Coach Brownell and Coach Grant and Coach Wienecki saw something special in him, and they tapped into that and they made him who he is. He has a natural, God-given talent, and they tapped into that and they have taken it to the next level.”