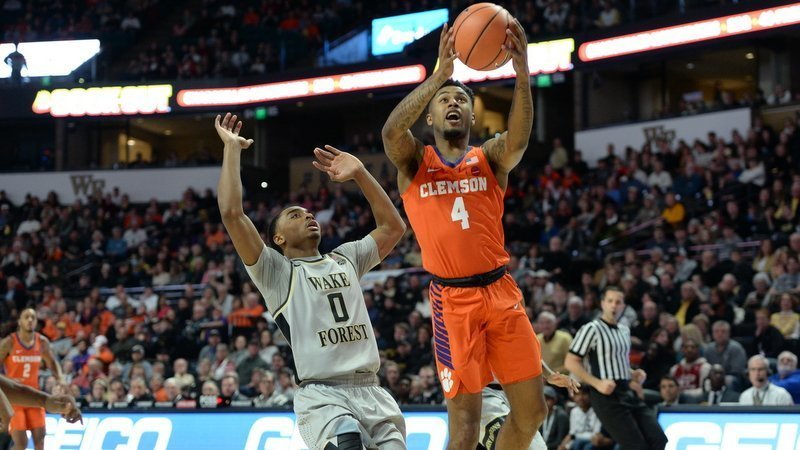 CLEMSON – Eleventh-ranked Clemson plays host to No.12 Duke Sunday in what will be a battle for second place in the ACC, but injuries are overshadowing the contest.

Clemson, already without the services of senior forward Donte Grantham, will be without backcourt star Shelton Mitchell Sunday. The Blue Devils might have to play without standout freshman Marvin Bagley, Jr., who missed the Virginia Tech game with a sprained knee.

Clemson is 20-5 overall and 9-4 in the ACC while the Blue Devils are 21-5 overall and also 9-4 in the conference. The teams are tied for second place behind first-place Virginia in the league standings. The top four teams in the regular season standings have a two-day bye in the ACC Tournament, which will be held at the Barclays Center in Brooklyn in early March.

Mitchell suffered a blow to his head with nine seconds left in overtime in Clemson’s loss at Florida St. last Wednesday. He remained motionless on the floor for several minutes before being helped off the court. He’s been in the concussion protocol after spending Thursday night in a Tallahassee hospital. Mitchell is third on the team, averaging 11.8 points per game. He is third on the team in minutes played and leads the Tigers in assists with 96.

“Obviously, a big game this weekend with Duke, a team that seems to be playing really well here the last couple of games. I don’t know if Marvin Bagley will be playing or not, but they’re playing at a really high level over these last couple of games,” Clemson head coach Brad Brownell said Friday. “Grayson Allen looks to be back in great form. They’re just kind of hitting their stride. I think we all go through lulls. I think sometimes people expect Duke to never lose a game. We know they’re going to come in here very hungry and playing at a very high level. I thought our guys competed pretty well down at Florida State.

“We obviously gave the game away with some poor turnovers, but when you go back and look at how we played in terms of our preparation and the competitive nature our team showed, it was really good. We actually got seven of our eight game goals - the turnover one being the one we didn’t. I don’t know if I’ve coached a game where we’ve done that well in all of the other factors and then not won the game. I wasn’t displeased with our performance. I thought our guys performed hard and well in terms in what we were trying to do in the game, but the turnovers proved really costly and we weren’t able to close the game out, so that’s disappointing.”

The 6-foot-11 Bagley is the ACC's leading scorer and rebounder, averaging 21.2 points and 11.4 rebounds this season. Brownell said the specter of Bagley won’t change the way the Tigers prepare for Duke.

“Not a lot. We’ll prepare like he’s playing. They don’t run a different offense when he’s in the game and things of that nature,” Brownell said. “Your team is mostly who you are right now - what you believe, how you want to coach, how you want to play. We know they’ve been playing some zone lately a good bit. They’ve mixed in man and zone throughout the season, so we’ve got to prepare for both of those things. Then, offensively, they’ve got a package of things that they run that highlight their best players and we try to do the same with ours. I don’t think it drastically changes how you prepare in any game.”

Who will run the point with Mitchell sidelined?

“Clyde (Trapp) is a guy that will get a good bit, but we’ll have the luxury of moving different guys around. Scott Spencer and A.J. Oliver certainly could see more time than they’ve seen,” Brownell said. “Those guys won’t play the point but they’ll get more touches. Marcquise can play some point for us. Gabe handles the ball well enough to be back there and do some things. Not everything we do is pure single point guard. We have multiple ballhandlers handle it. You saw some of that in that last game and that will continue. We just have to figure out some ways. We might have to tinker a few things, but we’ll work on that if we need to.”