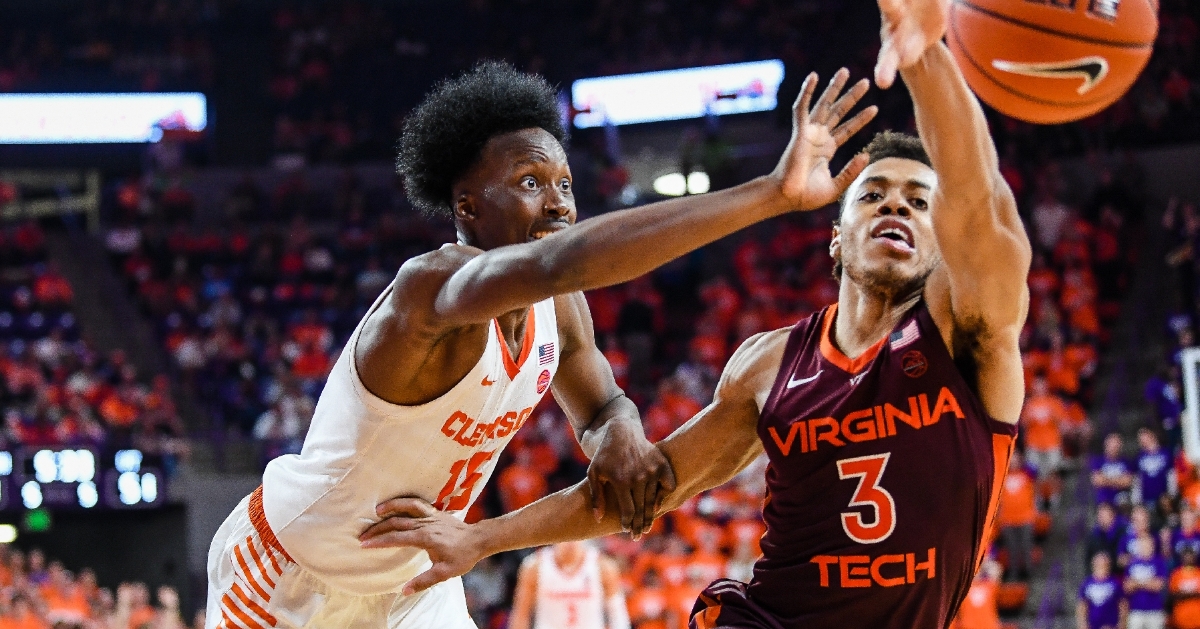 John Newman looks for room in the first half

The Tigers hit just 1-of-14 shots from 3-point range and missed six free throws in the second half in losing the season opener 67-60 to Virginia Tech in Littlejohn Coliseum Tuesday night. The early ACC action comes about after the league made the decision to move to 20 conference games (from 18) this season. Clemson plays a second ACC game before the New Year when they travel to FSU on Dec. 8th.

“I thought we played hard and we executed well offensively in the first half and then in the second half we, obviously panicked a little bit. I don’t know how many layups we missed. I am anxious to see,” head coach Brad Brownell said. “Obviously, there were a lot of missed free throws. We did not turn the ball over a lot. We had a couple of bad turnovers. We just looked a little nervous and a little unsure of ourselves.”

New Hokie head coach Mike Young said he was proud of the way his team fought.

“They’ll fight you,” he said. “That accounts for something in athletics. P.J. Horne’s toughness," Young said. "Wabissa Bede’s toughness. And you better have some toughness on that backside if you’re going to do this, and they did it, and I’m proud of them.”

The first half saw Clemson jump out to a quick 3-0 lead and hold a three-point lead at the break. Dawes starting the scoring with a trey from the corner. John Newman added a couple of layups and the Tigers pushed the lead to 11-3 at the 15:54 mark, but Tech came roaring back.

The Hokies took the lead at 16-15 on a 3-pointer by Nahiem Alleyne at the 11:11 mark and the teams traded the lead back-and-forth over the next several minutes. Simms hit a trey from the top of the key to give Clemson a 32-26 lead with just under four minutes to play, and Chase Hunter hit a 3-pointer with just over 50 seconds remaining in the half and Clemson took a 37-34 lead into intermission.

Play was sluggish through the first 12 minutes of the second half. The Tigers started the half with an easy layup by Simms, but the Hokies took a 40-39 lead on a 3-pointer by Isaiah Wilkins in the first three minutes. John Newman hit a 3-pointer and two free throws as the Tigers roared back in front to take a 44-40 lead.

Both teams went cold from there, trading turnovers and missed shots until Tech hit two free throws to take a 49-48 lead with just over eight minutes to play.

The Tigers went through a stretch where they went 6:45 without a field goal, almost five minutes without scoring and hit just 1-of-12 shots from the field. Simms broke the streak with a putback in the lane and Clemson led 50-49 with just over six minutes to play.

The Hokies came back behind Nolley to take a 53-50 lead heading into the last five minutes. Tevin Mack lost control of the ball at the top of the key and the loose ball was recovered by the Hokies. Mack fouled Nolley, who sank both free throws for a 55-50 lead with 4:08 to play.

Sims hit a free throw coming out of the under-4 media timeout and the Hokies missed two shots on the offensive end with Sims throwing a pass behind his back as he fell out of founds. Newman faked a 3-pointer on the other end and drove to the basket for a layup that made it 55-53 Virginia Tech with 2:16 to play in the contest.

The Hokies drained a shot in the lane on the ensuing possession to go up 57-53 and the Tigers missed on the offensive end, but an offensive foul on Nolley turned into Tech’s 7th team foul. Another foul sent Simms to the line and he hit both free throws to make it 57-55 Tech with 91 seconds left on the clock.

The Hokies promptly turned the ball over on the full-court press, and Newman was fouled on his way to the basket with just 1:11 to play in the contest. Newman calmly sank both free throws to tie the score at 57-57. The Tigers went for the full-court press again and just missed creating a turnover, but the ball was sent to the other end and Sims fouled the Hokie shooter after an easy dunk. P.J. Horne hit the free throw and the Hokies were back in front 60-57 with 1:03 to play.

Dawes had his shot blocked on the offensive end, the Hokies hit a layup and Clemson’s chances to win went out the door with most of the crowd.

The game was the first of three this week. The Tigers host Presbyterian at 7 pm Thursday and host Colgate at 3 pm Sunday.