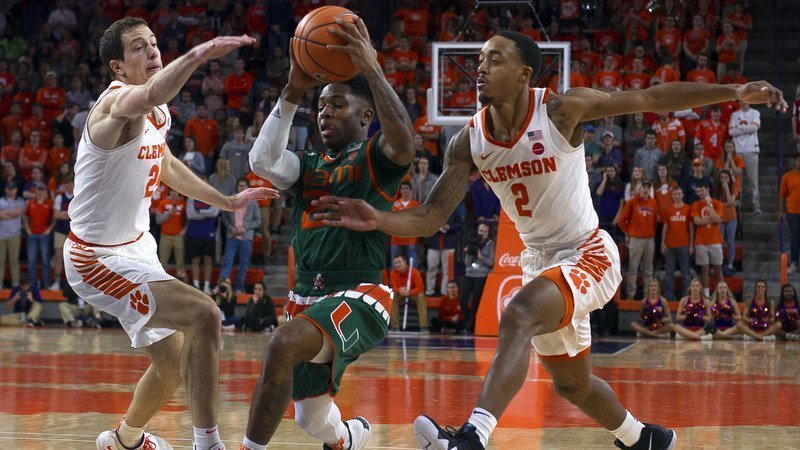 CLEMSON – A lot of defense and a bevy of 3-pointers were the perfect combination as Clemson knocked off ranked Miami Saturday afternoon in Littlejohn Coliseum.

Donte Grantham scored 18 points and No. 19 Clemson was 12-for-21 from beyond the arc in defeating No. 18 Miami 72-63 Saturday, moving head coach Brad Brownell into third place on the all-time win list at Clemson with 138.

Since Brownell took over prior to 2010-11, the Tigers have won 11 games against nationally ranked opponents.

Marcquise Reed scored 16 points, including the last six points for the Tigers from the line, and led Clemson with seven rebounds. Mark Donnal provided 12 points off the bench, while Shelton Mitchell added 11.

"Fantastic finish by our guys today. Showed a lot of heart and toughness and grit in this game," Brownell said. "I thought we were battling a little bit of mental and physical fatigue at times. Miami is a very strong and athletic team that does a lot of things really well. Certainly, the score isn’t indicative of the way the game was played. It was nip and tuck and we needed all 12 threes. I thought we shot it great and Donte was fantastic being somewhat tired after a very physical game at N.C. State, but to make those shots was huge. Obviously, Mark Donnal’s threes in the second half were a big lift. We found a way to get a few stops and make some free throws down the stretch to seal it."

Brownell said he was happy to see a large crowd.

"Great crowd. It was great to see that many students at the game. We’ve had some decent student turnouts," he said. "The community has been great. The community has been out a lot this year really supporting this team. It’s fun for our players to play in front of their classmates. I think it means a little more because they’re here early. Guys know it when you come to the arena and there’s a line out the door and around the building. That gives our guys juice, there’s no doubt about it. It had an impact on the win for sure."

"They shot 57-percent from three, scored 36 points on 21 shots. That’s going to win a lot of games and then every time we fouled them, they were 16-for-17 from the foul line," Larranaga said. "What a huge difference having so many three-point shooters. They had five guys make threes during the game and Grantham went 4-for-4 from three. Very nice and well-balanced offensive game for them. I thought our guys hung pretty tough. We didn’t shoot the ball very well - 38-percent and 26-percent from three and still were in the game with less than five minutes to go. I’m pretty proud of our guys, but I was very impressed with Clemson."

Neither team could pull away, and the Tigers led 34-30 at intermission.

Three-pointers by Grantham and DeVow powered the Tigers to a quick six-point lead early in the second half, but turnovers and missed shots were a part of a scoreless streak that lasted over four minutes and allowed Miami to cut the lead to two. A powerful dunk by Lonnie Walker brought Miami to within two at 42-40 with 13:30 to play in the contest, and another Tiger turnover led to a Miami score that tied the game 42-42. Mitchell broke the tie with a layup that made it 44-42 with 12:40 to play in the contest, breaking the scoreless drought.

A few minutes later Grantham started on the left wing and powered in for a dunk that made it 56-50, but another scoring drought allowed Miami to trim the lead to 56-54 with just over three minutes to play. The teams traded baskets to make it 58-56, but Reed hit two free throws to make it 60-56 with a little over two minutes to play.

A Miami free throw made it 60-57 at the 2:03 mark, but Reed brought the crowd to its feet when he hit a 3-pointer from the left wing that made it 63-57 at the 1:42 mark. Forty seconds later, Grantham lofted a 3-pointer from in front of the Clemson bench to give the Tigers their biggest lead of the day at 66-57 with 56.3 seconds to play.

The Hurricanes called a timeout, but their first shot out of the timeout was knocked out of bounds and Reed hit two free throws to seal the win for the Tigers.

Clemson travels to Chapel Hill to take on North Carolina Tuesday at 7 p.m. Clemson has never won in Chapel Hill.

Clemson vs Miami boxscore
Get the latest Clemson gear right here!
Comment on this story