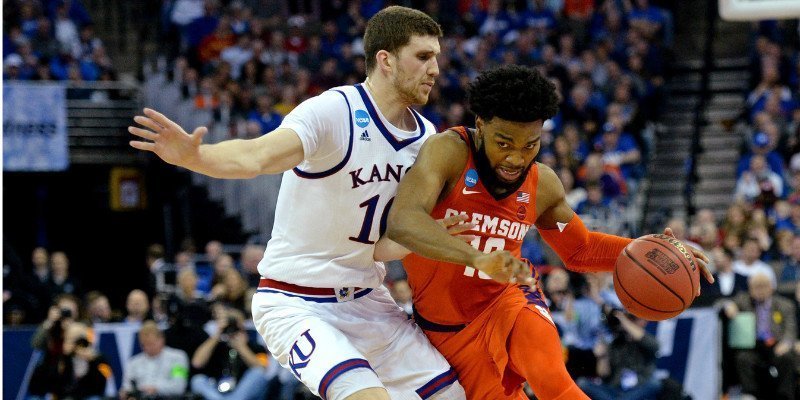 Clemson’s senior guard almost single-handedly brought Clemson back from a 20-point second half deficit, scoring a career-high 31 points on 10-for-17 shooting in his final game as a Tiger. Clemson lost to Kansas, 80-76, in the NCAA Tournament Friday night, but the Tigers made a brilliant rally in a Sweet 16 game, and DeVoe played maybe his best game with the nation tuned in.

“I just tried in any way possible to give my team a chance to win at the end. Really tried to rally the guys in the first half when we got down, just continued to fight,” DeVoe said. “Made some big stops down the stretch, gave us a chance, but we just weren't able to get over the hump.”

Heading into this season, DeVoe had appeared 83 games and had never scored 20 or more points in a game. He did it once in his first 20 games this season. After senior forward Donte Grantham went out with a torn ACL midway through the season, however, DeVoe’s game came alive.

In his final 15 games as a Tiger, he had eight games with 20 or more points, including the career-high 31 against Kansas.

DeVoe set a Clemson record for most points in an NCAA Tournament game Friday. The previous record was 26 from Dale Davis against LaSalle way back in 1990. DeVoe’s performance puts him into the upper echelon of Clemson basketball greats.

It marked another first on Friday with DeVoe becoming the first Clemson player to scored 20+ points in three consecutive NCAA Tournament games.

DeVoe’s performance wasn’t done in the scoring column, he became just the 27th member in Clemson history to achieve a “Triple Leadership”, leading the Tigers in points (31), rebounds (nine) and assists (three).

DeVoe told the media he left it all out on the court.

“It's just the fight I have, the fight I've had my entire career," he said. "I tried my best to rally our team down the stretch and just leave it all out there. It was cool to have 31, but I wanted to win. We tried to fight, had a chance down the stretch but missed too many shots.”

He then said that Clemson should expect NCAA Tournament experiences each season and that expectations should be heightened.

“I think it bumps it up a little bit and gives the fans some excitement for the program,” DeVoe said. “We are leaving a blueprint and a standard for the guys that are coming back. I hope this is motivation and I hope this hurts so they can get back here next year.”

“He’s everything. He’s a great player," Thomas said. "I love him to death. He had a really great season as a senior. I wish him the best of luck in his career.”

While his teammates sat in their lockers, many of them with tears in their eyes and towels draped over their heads, DeVoe met the media with his trademark smile.

The smile didn’t hide the hurt, however.

“It hurts now but maybe tonight or maybe a few weeks from now I will look back at it,” he said. “The past four years it has meant more and more to me. I will miss putting it on. I can't believe this is it. I wanted to win tonight. I wanted more. To make the Sweet 16 is cool, but wanted more.”