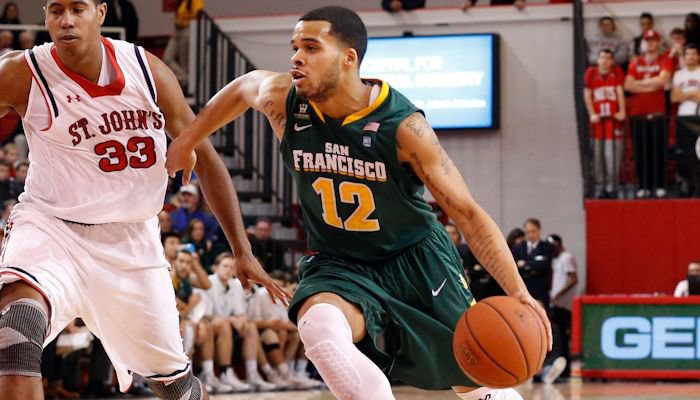 Avry Holmes
Guard
# 6-2, 200
Salem, OR
View Full Profile found everything he was looking for at Clemson, including the chance to compete for a starting job and the chance to play in the ACC.

The Salem (OR) native and University of San Francisco transfer was looking to transfer to a school that played in one of the power conferences, and it just so happened that head coach Brad Brownell

A match made in heaven, according to Holmes, who detailed to TigerNet Sunday evening the reasons why he will be traveling across the country to play in the ACC.

“When I signed my release, they were one of the schools that contacted me,” Holmes told TigerNet. “They were talking to me, and they wanted to get down there for a visit. They were the first school that I visited, and the situation they have there really couldn’t have worked out any better for me. When I come in, I will have a chance to play the point, and I know I will be replacing one of the ACC’s best point guards. The coaches are also great people, and they were pretty straightforward with me.”

Brownell made Holmes’ decision easy when he explained the team dynamics and the situation at point guard.

“He [Brownell] just told me the situation and that he loved my game and he was hoping that they could get me,” Holmes said. “He is straightforward, and there really wasn’t a message. He just let me know that he has a team that is full of good guys, and for a team to be successful you have to have good teammates and good coaches. It was just that the situation was right for me. Every recruiter will say pretty much the same thing, but what they have for you is really a big part of making that decision.”

For Holmes, choosing a school wasn’t about which school has the best history or the best facilities, it was about having the chance to contribute as soon as possible.

“I didn’t really pay attention to the tradition, and it wasn’t really the resources or the facilities that they have,” Holmes said. “All of the big schools have those. Really, the fact that got me was the situation that they have there. It’s a big role, and to play in the ACC with all of that talent was the best situation they had for me. Playing in the ACC? You really can’t get any better than that.”

Holmes probably won’t enroll at Clemson until the fall and will have to sit out the 2014-2015 season due to NCAA transfer rules, but will have the opportunity to play right away with the graduation of rising senior Rod Hall

“I know that I have a good chance to replace Rod Hall,” Holmes said. “But I also know the coaches aren’t just going to give that spot away. But as of right now I know I have the chance to go in and compete.”

As a freshman, Holmes was selected a WCC All-Freshman selection after appearing in 29 games and averaging 6.7 points and 1.7 points per game. He led the WCC in three-point percentage with .471 (41-for-87) and made at least one three pointer in 26 of 29 games.