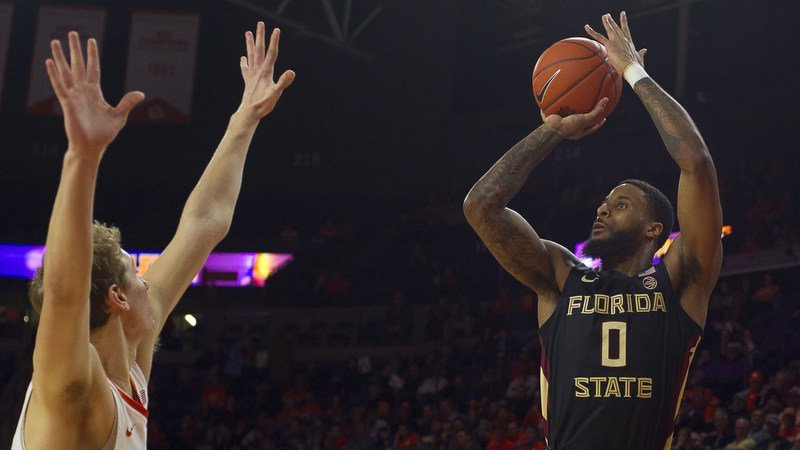 CLEMSON – A three-game losing streak in late February is not optimal for a bubble team chasing a berth in the NCAA Tournament.

No. 16 Florida St. rode a 15-2 run to end the first half to a dominant 77-64 victory over Clemson Tuesday night at Littlejohn Coliseum, giving the Tigers a three-game losing streak since knocking off a ranked Virginia Tech team on February 9th.

Florida State won a school-record eighth consecutive ACC game – they have won each of their games since defeating Clemson 77-68 on January 22nd in Tallahassee. Florida State is 4-0 at home and 4-0 on the road in ACC play during their current seven-game ACC winning streak. Clemson is now 32-43 all-time against the Seminoles.

“Well, a tough night tonight. We just didn’t play as well as we’ve been playing in certain games. Certainly, a lot of that is Florida State, they’re playing at a very good level,” Clemson head coach Brad Brownell said. “Physically they are hard to handle. They’re big and strong at every position from point guard to center.”

Florida St. held a 15-point lead at intermission and kept that working margin for much of the first 11 minutes of the second half. The Seminoles opened up a 59-43 lead after a David Nichols 3-pointer with 10:42 to play, but the Tigers began to show signs of life.

Florida St. eventually pushed the lead back to 13 at 66-53, and the Tigers couldn’t get back to single digits as the Seminoles hit free throws down the stretch.

“I thought our kids tried. I thought we had energy. I thought we were ready,” Brownell said. “I thought we got demoralized in the first half when we couldn’t score. I thought that really took some juice out of our guys. They have a lot of guys. That’s their strength. They keep fresh bodies in there defensively. They wear you down. That’s obviously not a strength for this year’s team for us. Our bench is just not producing at the level. Our freshmen are not quite ready.”

The Tigers jumped out to the quick 6-2 lead. David Skara opened the game with a 3-pointer, and hit a free throw a minute later gave Clemson the four-point advantage. It was at that point that the ‘Noles started their first big run of the half, outscoring Clemson 10-0 over four minutes to take a 12-6 lead.

The Seminoles eventually opened up a 9-point lead at 23-14, but Mitchell was fouled and hit the foul shot after hitting a 3-pointer, and Reed hit a 3-pointer of his own that brought Clemson to within two at 23-21.

Clemson vs. FSU box
Get the latest Clemson gear right here!
Comment on this story