It never truly has been easy to be a Clemson basketball fan.

Never was that more on display than this weekend.

While South Carolina’s men took the nation by storm with a win over Duke in the NCAA Tournament and the Gamecocks women continued to showcase one of the nation’s top programs, Clemson’s teams were nowhere to be found, except for some back and forth drama about who would be the men’s head coach next season.

Let’s start with the women’s program and get it out of the way before we move on to the men. That program, once strong and proud, just isn’t competitive, and it hasn’t been since Jim Davis was forced out as the head coach.

That’s one of the biggest mistakes in Clemson athletics history, and this program is still paying for it. While Dawn Staley has built a powerhouse with the South Carolina women’s team, Audra Smith’s Clemson team finished 15-16 overall and 4-14 in the ACC, including one win and one loss in the conference tournament. The record wasn’t good, but how the Tigers lost really puts things in perspective: Twelve of the losses were by double digits, and nine were by 20 points or more. 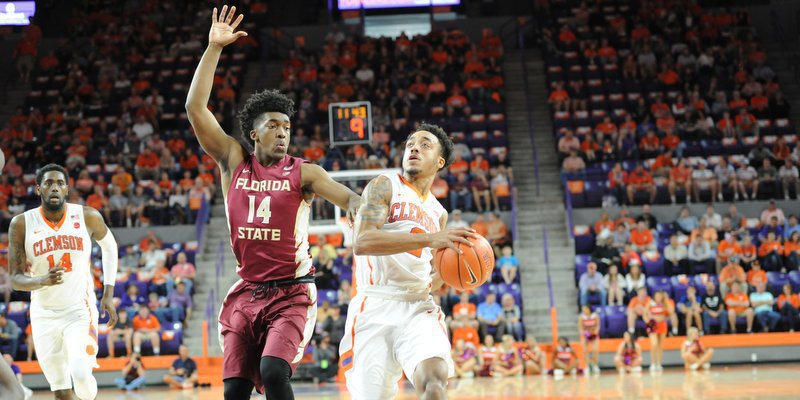 Something else that was hard to fathom? The entire 2016-17 season for the Clemson men’s team.

A 17-16 season, including 6-12 in the ACC, isn’t awful in Clemson’s history, and the season did include wins over Georgia and South Carolina. But a closer look reveals just how shaky this season was.

Clemson did win at South Carolina by two points, but Sindarius Thornwell, the heart and soul of the Gamecocks’ team, didn’t play. And the win over Georgia on opening night doesn’t look so terrific after realizing the Bulldogs had yet another underachieving season.

And let’s take a look at the close games. Since the 2013-14 run to the NIT semifinals, Clemson just hasn’t been able to close out games. This season, Clemson finished 4-13 in games decided by six points or fewer. Last year, they were 4-8 in those games and 5-8 the year before.

That adds up to 13-29 in those kinds of tight games, and if Clemson had won just a handful of those games, none of this weekend’s drama about the head coaching position would have taken place. But those losses and that drama did take place, and something has to be done to fix both.

Clemson’s shortcomings in ACC are well known, but there are too many fans who are just willing to throw up their hands and come up the usual excuses as to why this program can’t improve:

Clemson is a “football school.”

The basketball program has no tradition.

The ACC is too tough.

But those excuses are lazy, and if you just accept them as truth, you’re never going to have the kind of program Clemson deserves.

There are “football schools” that are good at basketball (and other sports, too), and in this day and age, the entire “football school” argument is ignorant of the facts. Other programs do it (Florida State and Notre Dame quickly come to mind in the ACC), and there is no reason Clemson can’t do the same. Heck, Louisville is strong in football, basketball and baseball, and Clemson should be, too. It has two of those down pat right now and has the resources for all three.

Sure, the tradition is lacking with the Clemson basketball program, but that doesn’t mean it can’t be done. Rick Barnes did it. Oliver Purnell did, too. And they did it with the same (or even fewer) resources than the program has now.

And the ACC certainly is tough, but that’s nothing new, and it’s not likely to change any time soon. The 1980s ACC was just as tough as the current ACC. Just because there are more teams now doesn’t make it tougher. Is it really more difficult to play Notre Dame, Louisville, Miami, Syracuse, Pittsburgh, Florida State, Virginia Tech and Boston College (the new breed) or to have two games against 1980s Duke, North Carolina, Maryland, N.C. State, Georgia Tech, Virginia and Wake Forest? That’s not a slam dunk either way.

What it comes down to is people. If you have the right people in place, none of those excuses hold water. Does Clemson have the right people in place? Athletics director Dan Radakovich seems to think so, so the results moving forward will decide that as he’s taking his first real big chance of his tenure with these programs. It’s his job to give these players and the coaches all the resources they need to be successful and help put them in a position to improve the programs. If he doesn’t do that, that’s on him.

If he does and things don’t begin to change, Radakovich will be forced to make a move, much like he was with baseball a couple of seasons ago.

Clemson fans have to hope it doesn’t come to that, but it’s not easy for Clemson fans to have much hope right now.