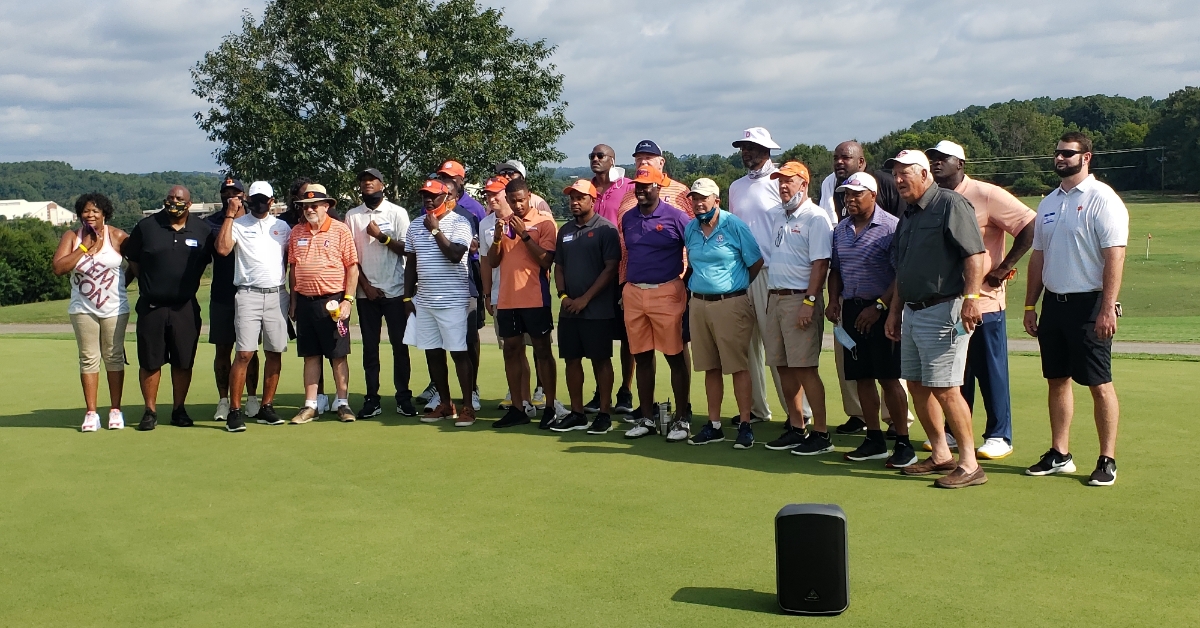 The celebrity cast at the golf tournament poses for a picture.

When a member of the Clemson family falls down, you help them get back up. It’s the Clemson way, according to former basketball coach Cliff Ellis, who was part of an All-Star cast that showed up at the Walker Golf Course Monday as part of the Sharone Wright Benefit Golf Tournament.

Wright, who played at Clemson from 1991-94, picked up a MRSA infection last summer (while swimming) that led to compartment syndrome, a life-threatening condition caused by pressure buildup from internal bleeding or swelling of tissues. Wright eventually had to have his left leg amputated.

It added to a long list of medical issues that have faced Wright since leaving Clemson – he’s also had to recover from a near-fatal car wreck and a bout with cancer – and the bills started to pile up.

Wayne Buckingham, a former teammate of Wright’s at Clemson, knew what Wright was going through, knew that someone needed to step in and help, and together with former Clemson SID (and legend in his own right) Tim Bourret put together the golf tournament.

“I recruited Sharone to Clemson. Dale (Davis) and Elden (Campbell) left me here by myself, so I recruited Sharone,” Buckingham said. “He is like my little brother. When he got sick, he didn’t want to tell anybody or do anything. I started thinking about what I could do to help, and God put it on my heart to do my tournament this year to help Sharone. I reached out to all of the guys to see if they could come in. We had the tournament set for June, but we had to postpone it until now because of COVID. But most of the guys said they could still come in, so we put it together.”

Ellis, who coached at Clemson from 1984-94, was Wright’s head coach with the Tigers and the two still have a close relationship.

“Sharone has gone through a lot. I stay in touch with him,” Ellis said. “He has been going through a lot - he has battled cancer and had that leg amputated. He has been like a son. He has gone through a lot of battles, and right now he is definitely going through a tough time. He was a tough player, a hard-nosed player, he was always fighting and he will do the same thing with this battle, he will continue to fight and win this battle. Right now, it's getting the prosthetic and learning to walk.”

Ellis then went on to say that when a member of the Clemson family falls, we are there to pick them up.

“I am glad that everybody is here. It's the way the Clemson family works,” Ellis said. “When a Clemson player has fallen, you pick them up. That's what we do. That is what we stressed as a team here at Clemson and that is what we are doing for Sharone here today.”

Bourret said that he thinks the benefit was close to reaching its goal, but more help is needed. To contribute to the fundraiser started by Buckingham, follow the link below: