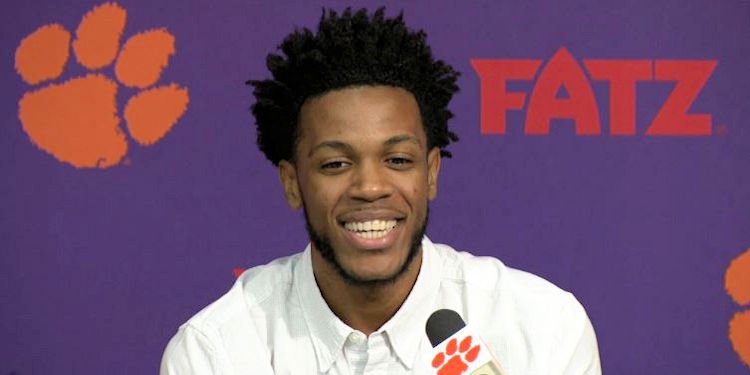 CLEMSON – Clemson head coach Brad Brownell broke into his biggest smile in years Wednesday when asked if it felt a little like Christmas morning, and the smile said it all.

Junior forward Jaron Blossomgame announced Wednesday afternoon that he will withdraw his name from NBA Draft consideration and return to Clemson for his senior season, a decision he told Brownell about just minutes before walking into the McFadden team room to tell the rest of the world.

“I came into his office and sat down and talked to him for about five minutes. He had no idea what I was going to say,” Blossomgame told TigerNet after the announcement. “He had no idea what my decision would be. When I finally told him he stood up, shook hands, and gave me a hug. He was pretty happy. He did his best job coming in here not cheesing or smiling to give it away right away so that was pretty cool.

“I was definitely relieved. It was very stressful over these last three weeks. This is a very hard decision. A lot of people are not in this position. I am very blessed to be here, but it was so hard. I just didn't know what I wanted to do ever. Even like yesterday I had no idea what I wanted to do. So I really took last night and this morning to sit down and process all the information I got. I really believe with the opportunities I have coming back next year; I can propel myself into a lottery round first round pick.”

Blossomgame worked out for seven teams and took part in the NBA Draft Combine over the past three weeks. He worked out (in order) for the Utah Jazz, Boston Celtics, Cleveland Cavaliers, Los Angeles Clippers, Philadelphia 76ers, San Antonio Spurs and Phoenix Suns.

“Yeah, these last few weeks have been tough for me. Just like I said all the traveling and trying to keep up academics and knowing I have to make a decision on the 25th was tough. It was tough,” Blossomgame said. “There wasn't a day I didn't think about it. There wasn't a day I didn't think about changing my mind or wonder if I would make the right decision or not. I just had to believe and trust in my ability and trust in myself.”

“He is one of the guys I am closest to on the staff here. He is like one of my best friends. It's kind of crazy how we have developed our relationship, but it is definitely a good relationship to have,” Blossomgame said. “I called him probably three or four times a day these past three days trying to figure out what I wanted to do. I even asked him if he was in my shoes what would he do.

“He really couldn't answer it because it's a hard decision. Some players will leave because of different reasons like financial situations or other factors. I'm very confident in Clemson Basketball. I feel good about what we are doing on the court. I am very appreciative to have someone like Coach Smith in my life.”

He also took the time to talk to his family about the proper path.

“My family is very supportive of me. I did talk to my mom and dad about leaving and coming back,” he said. “At the end of the day, they were very supportive either way. They said any decision I make they will support and be behind 100%. I am very fortunate to have parents like that.”

Former Clemson forward K.J. McDaniels left after his junior season while former center Trevor Booker stayed at Clemson all four years, and Blossomgame talked to both players in an effort to gain a little more insight into the process.

“I talked to K.J. and Trevor Booker yesterday. They both told me to do what is best for myself and my future,” Blossomgame said. “I can't come in here and come back to Clemson just because Coach Brownell wants me to. I have to do it because I believe that is what actually is best for me. It was very hard, but they were very helpful throughout this whole situation.”

Blossomgame was named to the All-ACC First Team and was voted the ACC’s Most Improved Player in 2015-16 after averaging 18.7 points and 6.7 rebounds per game. His scoring average was the highest average by a Tiger since 2000-01. Blossomgame produced 16 games with at least 20 points, including three with at least 30. He notched a career-high 33 in a game at NC State.

A relieved Brownell said he was excited to have one of the ACC’s best players back for his senior season.

“Jaron wants to be a first-round draft pick, and in some ways that’s why he’s coming back,” Brownell said. “But at the same time he loves it here, he knows the type of team we can have next season, and feels there are bright things in our program for our team and for himself. We supported Jaron with whatever he decided to do, but obviously we’re excited he’s coming back for his senior year.”

The Tigers will move into a new arena this fall, and Brownell was asked if the new home and Blossomgame's return made Wednesday feel like Christmas in May, he said yes.

"Yeah. Absolutely. In fact, based on the gifts I've been getting lately it feels a hell of a lot better. Socks and undershirts. We can't be more excited about the new arena," he said. "It's going to be fantastic. The renewed commitment to basketball. I think our recruiting has continued to take an uptick. We have better and better players, so today's decision is one that keeps us in a position to where we think - we've done reasonably well and we've been in the middle in the league the last three or four years - this gives us a chance to kind of break down the barrier and try to get to the top of the league."