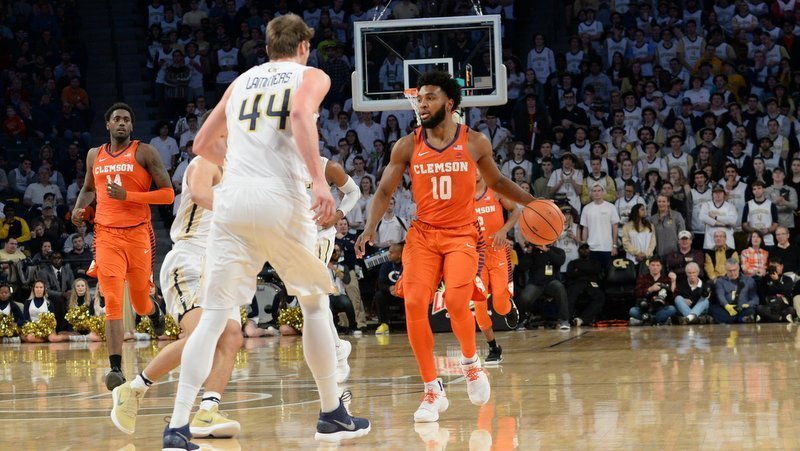 DeVoe has raised his played in recent weeks

CLEMSON – Clemson head coach Brad Brownell was on the recruiting trail looking for the Tigers’ next scorer when he ran across a player most of the big-time programs weren’t willing to recruit named Gabe DeVoe. Brownell came back to Clemson and told his assistant coaches that DeVoe needed to be more of a priority heading forward, and the Tigers wound up gaining his services.

When senior forward Donte Grantham, a member of DeVoe’s recruiting class and one of the Tigers’ leaders, went down with a torn ACL three weeks ago, DeVoe once again needed to be a priority for the Tigers.

He’s responded with the best stretch of his career.

With Grantham out due to the ACL injury, DeVoe has averaged 20.4 points and 4.4 rebounds over the last five games. In that stretch, DeVoe has gone 22-of-36 (61.1 percent) on three-pointers — and 57.8 percent from the field. DeVoe has four career games of 20-plus points and three of those performances have come in the last two weeks.

DeVoe hit seven triples in last week’s win over Pittsburgh, and he said the game resembles his career path.

“I'm just playing with extreme confidence. My teammates believe in me and want to give me the ball. The coaches believe in me as well. I just have to continue to play solid defensively and knock shots in.”

Clemson turned out to be DeVoe’s biggest offer – Appalachian St., Elon and Charlotte were among his other offers – and he started his Clemson career by missing his first 13 shots and didn’t make a field goal in Littlejohn Coliseum until March 3rd of his freshman season.

Now he can’t seem to miss, but he added that he doesn’t let anything bother him.

“I don't feel any pressure. I just shoot without a conscience and not think about it,” he said. “I’ve been hot the last few games and I want to keep it rolling Thursday. With Donte going down we had to figure some things out and the last few games have been huge. There are more opportunities for me now and I can shoot the ball a little more now.”

Brownell is glad he took the time to recruit DeVoe.

“He's playing at an unbelievably high level - just shooting the ball with a lot of confidence,” Brownell said. “He put in a lot of work. He shoots extra. He's one of the first guys in the gym and he's been that way all through fall shooting when we've come in three or four mornings a week as a team to shoot. You're happy for guys on your team and in your program that develop. This is what you want for them at the end of their careers is to be playing their best basketball and to be enjoying it and he's certainly doing both.”