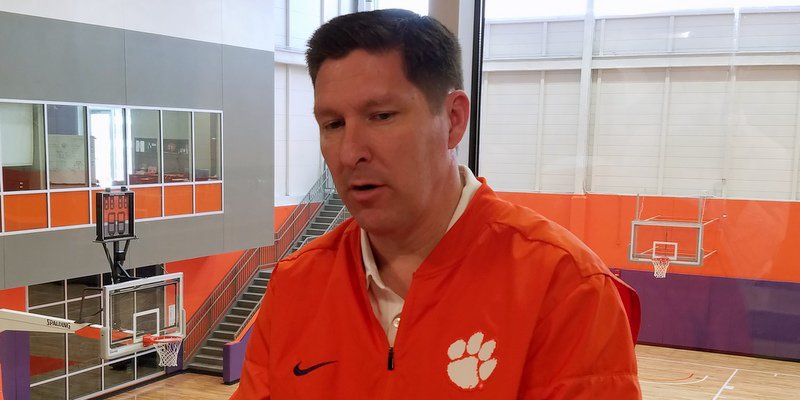 Brownell meets with the media before the spring game

CLEMSON – Brad Brownell sat down with members of the media a little over a week ago, and spent time defending his program while also pointing to what he hopes is a bright future.

Brownell's status with the program was in question following a 17-16 campaign in which the Tigers lost 12 games by six points or fewer. Clemson was 6-12 in the ACC and lost at home in the NIT to Oakland to end the season. However, Athletic Director Dan Radakovich announced a few weeks ago that Brownell would return for his eighth season at the helm of the Tigers.

Brownell said he didn’t pay attention to the complaints coming from outside of the program, saying that the media and fans are too focused on wins and losses.

“I don't worry a lot about the outside pressures. There has been a little more visibility and what has been made of it,” Brownell said. “But sometimes that is because we only focus on wins and losses, and while wins and losses are the most important thing in a lot of ways, we were two wins away. We have been there. We've been on the surface a couple of times. But our foundation is strong. I think that is what Dan saw, and what people close to our program see.”

He then said he was proud of the way his team played this past season.

Brownell meets with the media before the spring game "

“On the court, I thought we made very good strides in a lot of ways this season. We played the 27th toughest schedule in the country,” Brownell said. “Our RPI finished at 68. We had four top-50 wins and eight top-100 wins, which when you compare that to the folks that were in the last eight teams in the tournament we're right at the top and right in the middle of those categories. I think it shows that from a competitive standpoint we were extremely close. We averaged 75 points a game, which was a high point for us. I thought we played a style that people enjoyed watching this year and showcased some of our good young talent that we have on our roster. I think the class that we're bringing in is as good as it's been. A lot of that is because of this facility and some of the things we've been able to do and show in terms of more of a commitment to basketball. I'm proud of that.”

However, Clemson showed an inability to win close games, and it was that “razor-thin” margin that kept the Tigers out of the NCAA Tournament.

“I think our guys showed a lot of heart and character this year. There is no question. We lost five games by three points or less. There were a lot of teams that would have buckled under or given in, and our guys kept coming out every week and competing at a very high level,” Brownell said. “We played some excellent basketball. Unfortunately, we weren't able to close out some games. To be honest, with you, when you look at all of those things, we were two wins short. I have analyzed the last ten teams in the tournament and the first four out, and there is just a razor-thin margin between where we are and where we want to be. We had chances, but we couldn't close out enough games. But our numbers show we were a good basketball team this year, but we fell short of our goal of making the NCAA Tournament. We have to find a way to get there and get over the hump.”

On his return and the future

“I have a great affinity for Clemson. I think it's a tremendous academic institution and it's a place that I really appreciate the values of the folks here and what this place stands for. My family loves living here. I have a lot of respect for our leadership of our university and what they're trying to do and the vision. This has always been a place where I think is a great fit. I'm obviously extremely excited about being back as the coach. I think we're in a time where it's an exciting time for the future in basketball. I think we have a lot of positive things going on in our program and in my meeting with Dan (Radakovich) and Graham (Neff). We had a great discussion for the better part of two hours one Saturday and really went through all aspects of the program. I think a lot of things came out from both sides that showed we're doing a lot of really good things off the court - our guys graduate, they are tremendous ambassadors for our university in terms of how they carry themselves on campus and the kinds of things they get involved with in the community and give back. I think our staff is well liked and respected by other coaches and other people in departments we deal with on a regular basis. We pride ourselves on doing things first class and treating people with respect and being good representatives of our university.”

*Some of it involves me making more adjustments defensively. I have to understand my personnel better this year. Defensively we had some liabilities and some youth. I have to commit to a zone defense or find a defense that can consistently help these guys.

*More consistent use of a sports psychologist.

*Spoke with Dan and Dabo about making a coaching change. No fault of Mike Winiecki, but there are times when you need a new perspective.

*Have to be better late in games.

*Hopes to have a replacement for assistant coach Mike Winiecki in place soon, but wants to sit down and think it through. Not sure if will be someone with recruiting ties, or someone who was once a head coach or has a unique defense.

*The whole Greenville ordeal. We ran out of gas late.

*Having to share facilities with other programs while Littlejohn was being renovated.