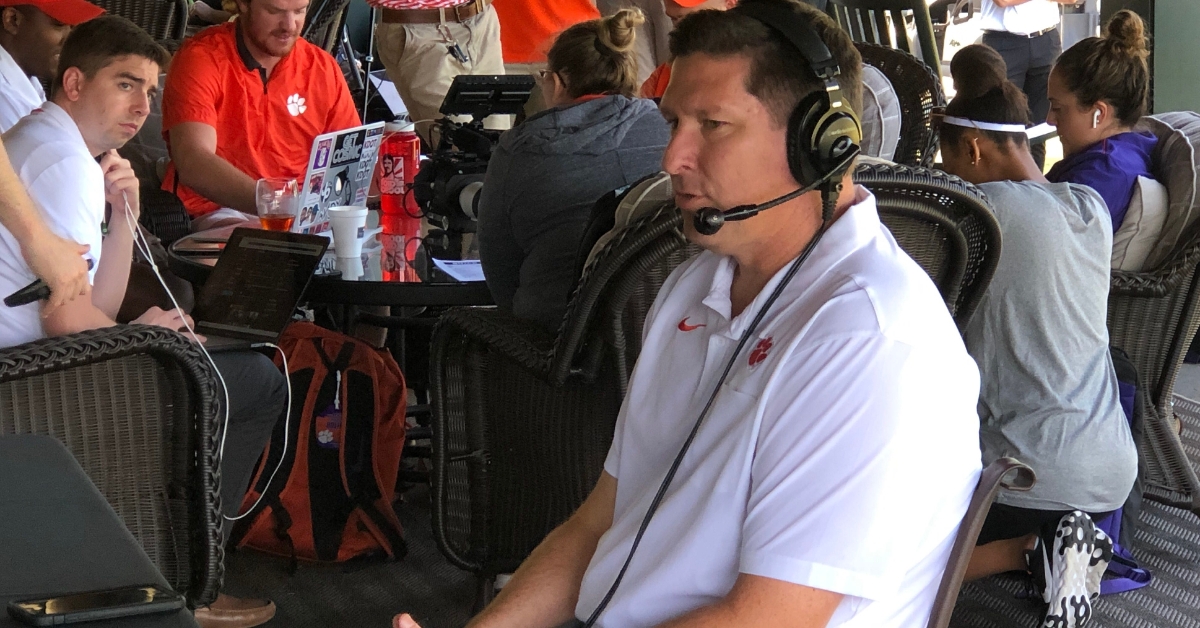 Brownell does a radio show at The Reserve Wednesday.

SUNSET – The world champs are ready to take aim at a championship closer to home.

The Clemson basketball team is fresh off a gold medal performance this summer at the World University Games in Italy and now head coach Brad Brownell is excited about his team’s chances in the upcoming season.

Brownell met with the media early Wednesday at The Reserve at Lake Keowee and took a look back at the summer and ahead to the 2019-20 season.

“Just really excited about 2019. Coming off an incredible summer where we were able to win the gold medal in the World University Games,” Brownell said. “A unique experience that I think our staff and players will remember for a long time. To have the opportunity to represent the United States is something very few people get to do, so to have that opportunity is very humbling and I think made a big impact on our team. We had a unique situation where we were still recruiting players well into the summer last year and had to bring seven new guys together and assimilate a team quickly and deal with some injuries to a couple of good players that we were counting on.

“I was really proud of the way our guys put it all together. I like this team. I think there's a difference sometimes when you have so many new players - seven new players and half your roster is new. The young guys come in and there's this youthful exuberance and enthusiasm but then your older guys - our two grad transfers and our two other transfers - this is their first time to be at Clemson. They all want to put their best foot forward. I think they're excited about a new opportunity. When you get guys like that, they're usually very coachable.”

With so many new faces, there is no lack of excitement.

“There's an enthusiasm and excitement with every meeting. I think we saw that in Italy and it's continued here. Our guys really like each other,” Brownell said. “I think we're probably void of a preseason superstar like we've had. I think we have very good depth. We're still in a wait and see with our roster but we took 11 guys that played regularly in Italy and we subbed them in and out frequently. Everybody played and played unselfishly and together.”

“They're both doing well. I think both are ahead of schedule. At one time, we were hoping to get Jonathan by the end of December. We're hopeful maybe it will be the beginning of December. Everything still has to go well. It's the beginning of October so he still has a couple of months of good rehab to have but he's done exceptionally well. Clyde is doing well also. His injury occurred five weeks later. I think we were hopeful for maybe the end of January and now we're looking at the beginning of January if things go well. He's a little bit further behind so it's hard to predict those kinds of things. Their attitudes are both great. The doctors and strength coach and trainers have done a phenomenal job and the kids have really approached it the right way. We have to all be careful in expecting that just because they come back that they're not going to be back like the player they probably were right before they got hurt. There's going to be an adjustment period that it's going to take some time to get used to.

“We went out and got two grad transfers - Tevin Mack and Curran Scott. We had no seniors coming back. Playing with freshmen in this league is not usually a recipe for success. You need some older guys who have been through it. Tevin is a young man that I've known since he was 17 years old and recruited him for a good while, so I knew of his ability, his talent. I think this is a great opportunity for him to come back to where he's from - South Carolina - and really have a big senior year. He's a guy that can make shots. He can score. We need that. He has to learn another system and it's his third system so there's a lot that goes into it. He's got to fit in with a younger team but he's done a good job. I really like how unselfish he's been. He's surprised me a little bit with how unselfish he's been.

“Curran is a guy that we saw could come in and play a couple of positions for us, bring some experience, bring some more three-point shooting. He's done a good job of adjusting. I'm really glad we added those guys. I think their maturity level is something we're going to need desperately when we get to ACC play.”

*Clemson is still waiting on a decision on Khavon Moore and Nick Honor.