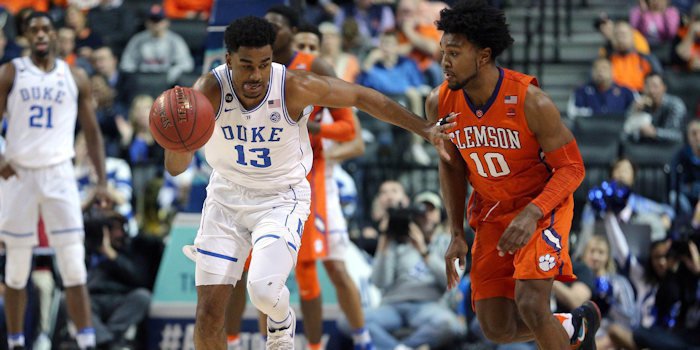 DeVoe works up the court early in the game (Photo by Brad Penner, USAT)

Close losses have been the hallmark of the season for Clemson, and that trend continued Wednesday afternoon.

Duke went on an 11-4 run after Clemson closed to within one at 69-68 with 2:51 to play, and the fifth-seeded Blue Devils overcame 12th-seeded Clemson’s gritty start in defeating the Tigers 79-72 Wednesday in the second round of the ACC Tournament at the Barclays Center in Brooklyn, New York.

Clemson fell to 17-15 with the loss and will await a probable selection to the NIT Sunday. Duke improved to 24-8 and will advance to face Louisville in Thursday’s third round. Louisville had a double-bye in the tournament.

A layup by Luke Kennard gave Duke a 68-58 lead with just over five minutes to play, but the Tigers got a 3-pointer by Shelton Mitchell and a stretch of free throws from Marcquise Reed to make it 69-68. Duke scored four straight, but Sidy Djitte’s put-back made it 73-70 with 96 seconds left on the game clock.

However, Gabe DeVoe missed a 3-pointer from the wing with 54 seconds remaining and Clemson trailing 75-70 and the Blue Devils were able to hit their free throws and pull away.

"Congratulations to Duke. I thought those guys really made plays in the second half and just outplayed us," Clemson head coach Brad Brownell said. "We thought in the first half, once we kind of got into the game, we played very well and defended them at a good level. But we had a harder time guarding them. I thought we made some mistakes defensively in the second half for sure. Our guys fought back. That's what we do. We are a tough team to knock out. Obviously we missed the layup that I don't know if would have cut it to one or two. That changed the whole game. If he makes that layup Duke is going to have to make pressure plays. They didn't have to do that because we didn't make the layup."

DeVoe works up the court early in the game (Photo by Brad Penner, USAT)"

Clemson was led by Jaron Blossomgame’s 19 points, while Mitchell added 17. Reed added 13. Duke was led by Kennard, Jayson Tatum and Frank Jackson, who each scored 20.

The teams were tied at 33-33 at halftime, but Duke came out of the locker room on fire. Shelton Mitchell scored after a Marcquise Reed steal to open the half, but Duke’s Kennard went on a tear. Back-to-back jumpers by Kennard fueled a 14-4 Duke run and a 49-37 Blue Devil lead.

Duke jumped out to an early 9-3 lead in the first half, but Clemson went on a 12-3 run and Blossomgame’s dunk made it16-15 Blue Devils with just over nine minutes to play in the half. Duke extended the lead to 20-15, but Duke’ Grayson Allen was part of a series of fouls on the Devils that allowed Clemson to take a 29-25 lead with just over three minutes to play.

Allen was called for an over an over-the-back foul on Sidy Djitte, and he when he slammed the basketball to court in frustration he was called for a technical by official Roger Ayers. The Blue Devils scored the final four points of the half, and the score was tied at 33 at intermission.