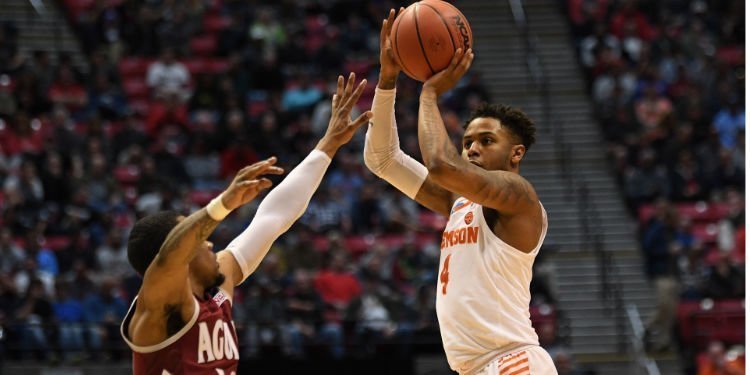 Mitchell scores early in the first half (Photo by Orlando Ramirez, USAT)

SAN DIEGO – Clemson’s three-headed monster at guard had an answer at every turn Friday night, sending the Tigers to Sunday’s second round of the NCAA Tournament.

Shelton Mitchell tied his career-high with 23 points, Gabe DeVoe added 22 and Marcquise Reed chipped in 15 as Clemson defeated New Mexico St. 79-68 at Viejas Arena. Mitchell’s 23 were the most points by a Tiger in an NCAA Tournament game since 1990 (Dale Davis 26 vs La Salle

The Tigers will face Auburn Sunday at 7:10 Eastern and will be broadcast on TBS. Auburn defeated the College of Charleston (and former Clemson assistant Earl Grant) 62-58 earlier in the day. Before Friday, the Tigers’ last victory in the NCAA Tournament came in the First Four game in 2011 – a 70-52 win over UAB (Alabama-Birmingham).

Clemson improves to Clemson 24-9 on the season. The Aggies’ season ends with a 28-6 record.

Mitchell said he wanted the ball in his hands with the game on the line.

"Of course. I am a ball handler," he said. "They were playing aggresive on the outside and I think that opened up some things for us. To be able to make it to the Round of 32 is huge. I am happy we get to stay around here for another two days. I feel like we can play with anyone, any of us can score. And to get this first game under our belt and get the nerves out of the way means a lot. This means a lot for our team to come in here and win a game."

Many of DeVoe's points came via the drive.

Mitchell scores early in the first half (Photo by Orlando Ramirez, USAT)"

"They came out and played me aggressively and ran me off the 3-point line," DeVoe said. "We had a lot of open driving lanes and I was able to finish around the rim tonight. I think Shelton did a great job down the stretch. They did a good job of defending the passing lanes and Shelton was great. I think we will be ready for Auburn Sunday.

"This is special. The goal going into the season was to get here, but now that we're here, the goal has changed. The goal now is to win."

Much of the first half resembled a track meet. The Aggies were hitting early and jumped out to a 10-9 lead. Reed hit a layup at the 13:49 mark that put Clemson up 11-10 and the Tigers led the rest of the half except for a 15-15 tie.

The teams traded baskets to start the second half, but the Tigers opened up an 18-point lead barely three minutes in. Trailing 48-36, the Aggies missed two free throws and saw Mitchell hit a 3-pointer on the offensive end. Elijah Thomas was fouled on the play, the Tigers retained possession, and Mitchell earned an old-fashioned three-point play and the Tigers 54-36 at the 16:56 mark.

A layup by DeVoe at the 11:35 mark pushed the Clemson advantage to 17 at 60-43, but the Aggies didn’t go away quietly. Back-to-back 3-pointers by the Aggies’ Keyon Jones forced Brownell to call a timeout with Clemson leading 60-49 at the 10:32 mark.

The Aggies stayed hot and continued to chip away at the Clemson lead, and the pro-Aggie crowd went nuts when Jones hit a layup to make it just 68-62 with under six minutes to play. However, just like every other time, one of Clemson’s guards had an answer.

With the crowd at full throat, Mitchell calmly stepped in and drilled a 3-pointer from the left key to make it 71-62. Mitchell turned to the Aggie crowd, put his finger to his lips to ask for quiet. A minute later, Mitchell hit two free throws to push Clemson’s lead back to double-digits at 73-62. After two scoreless possessions by the Aggies, Mitchell’s crossover dribble led to a layup and Clemson led 75-62 with under three minutes left in the game.