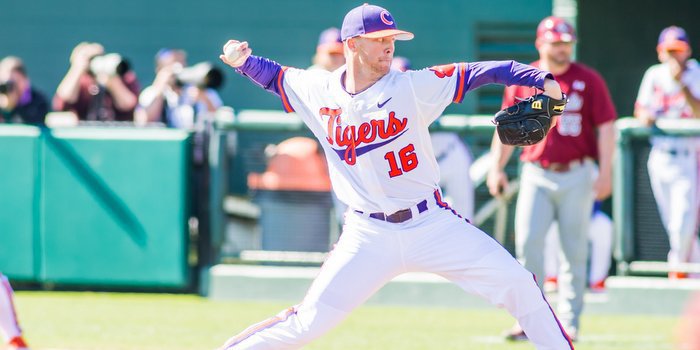 CLEMSON – During the eighth inning of Clemson’s 4-1 victory over South Carolina Sunday afternoon, head coach Monte Lee walked to the mound to take the ball from starter Alex Eubanks, who had left all of his heart and lot of guts on the pitching mound at Doug Kingsmore Stadium.

As Eubanks left the field and headed to the Clemson dugout, his day’s work done, the Clemson faithful stood to their feet and gave an ovation worthy of a king. It was an act of appreciation for one of their own, for a kid who grew up a Clemson fan, a kid who reveled in the fact that the Tigers would win the season series over South Carolina, a win that came on the right arm of the redshirt freshman hurler.

The Moore (SC) Byrnes product learned he would start Sunday’s series finale late Saturday evening, and he rose to the occasion in beating his and Clemson’s rival in an early-season statement series. Eubanks pitched 7.2 innings, gave up six hits and allowed one run to go along with one walk and eight strikeouts in 108 pitches (75 strikes.)

The victory gave the Tigers a 2-1 series win over their rivals, and Eubanks had a ball leading the way.

“It was definitely awesome because this is the only place I've ever wanted to play,” Eubanks said after the game, “It was really cool for my first start to be against our rival. It was definitely fun. I just tried to pitch to my strengths and let my defense work and they did a phenomenal job the whole game. That was the game plan going in and we tried to stick with it.”

Lee said Eubanks got better as the game went along.

"He is a strike thrower. He's got two different breaking balls,” Lee said. “He mixes pitches very well and keeps the ball down," Lee said. "He's athletic on the mound. For me, he got better as the game went on. He was very, very impressive. He's got big-time makeup. He's a competitor, and we felt like he was the right matchup today."

Lee has used Eubanks as the first pitcher out of the pen behind Friday starter Charlie Barnes early in the season, but the Tigers were throttled 8-1 Friday night in Columbia and Eubanks didn’t pitch. Reliever Pat Krall finished Saturday’s win and Eubanks earned the right to start Sunday’s series finale.

“(Pitching) Coach (Andrew) See came up to me when we were getting off the bus Saturday night,” Eubanks said. “He told me I was going to start Sunday. I kind of had a thought I might start, but to hear it from him got me excited. I was pretty amped. You can ask Chase (Pinder). He is my roomie on the road, so he knows I was pretty excited.”

Eubanks settled in early and mixed his pitches to keep the Gamecocks off balance.

“I was just really focused on executing pitches and trying to have fun. That's what we play this game for, and that's what I was trying to do,” he said. “It was mainly my fastball and my cutter. And I threw my slider a couple of times. Honestly, my changeup was really big for me today. They have a lot of lefties in that lineup so that was one of the bigger pitches for me today.”

He said he only had one goal in mind – beat the Gamecocks.

“I didn't have a certain number (pitches) I was trying to get to. I just wanted to go out every single inning they handed me the ball and give us the best chance to win I possibly could,” he said. “This is big for our team, especially rolling into ACC play and especially after Friday night. Coming out and losing that game and getting our butts whipped, and then showing up and showing out the next day and then showing up today and taking the series is a big momentum builder for us.”