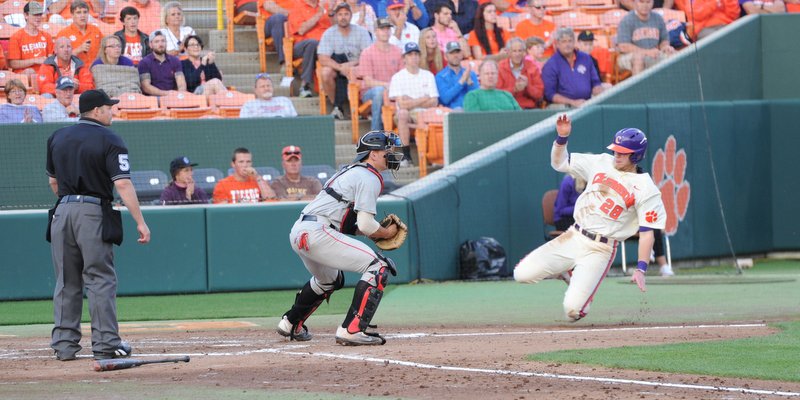 Jackson earned his sixth win of the season

Clemson improved to 31-7 with the win, while Georgia fell to 15-23. The Tigers defeated Georgia 4-0 in Athens two weeks ago.

Tyler Jackson earned the win, his sixth of the season. Andrew Cox drove in two runs, while Williams also added his second stolen base of the season.

Jacob Hennessy came on with two outs in the bottom of the ninth and the tying run at the plate, striking out Georgia's Drew Moody to end the game and earn his third save of the season.

Jackson danced in and out of trouble through the first three innings, giving up five hits but only run. Bulldog pinch-hitter Mitchell Webb launched a home run over the wall in left-center in the second – the ball barely eluding the glove of Rohlman – and Georgia had its first run against Clemson this season.

The Tigers broke it open in the bottom of the fourth. Rohlman singled to left to lead off the inning, and the Bulldogs elected to walk Seth Beer after Logan Davidson lined out to second. Williams lofted a double to deep left-center, scoring Rohlman and Beer for a 2-1 Clemson lead.

Robert Jolly followed the Williams double with a walk, and Andrew Cox laced a double that scored Williams for a 3-1 lead. Jordan Greene punched a single to right that scored Jolly, and Cox scored on an errant pickoff throw to third. Grayson Byrd bounced into an RBI groundout, scoring Greene for a 6-1 Clemson advantage. 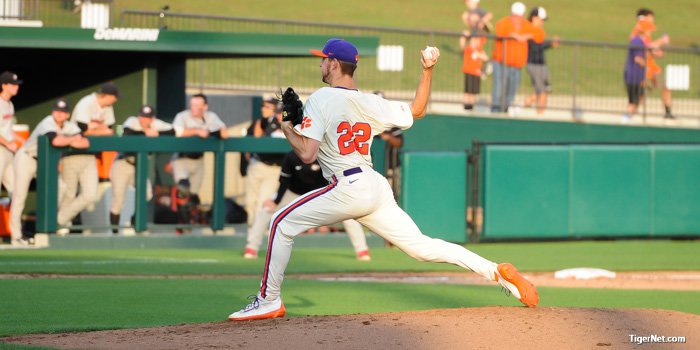 Jackson earned his sixth win of the season"

Williams stroked his 10th homer of the season in the bottom of the fifth – a high drive over the wall in center – for a 7-1 lead through five innings.

Jackson ran into trouble in the seventh. Two singles, a wild pitch, a fielder’s choice, and a triple led to three runs in the top of the frame, chasing Jackson. He was replaced by Owen Griffith, who stranded the runner at the third and Clemson clinging to a 7-4 lead.

Jackson pitched 6 2/3 innings, giving up eight hits and four runs, although just one of the runs was earned. He struck out seven and didn’t walk a batter in earning his sixth win.

Williams was hit by a pitch leading off the bottom of the eighth, stole second and then moved to third on a wild pitch. Jolly promptly singled through the right side for an 8-4 lead. Cox walked on four pitches, and Greene sacrificed both runners into scoring position. Pinch-hitter Weston Jackson lofted a sacrifice fly to left, scoring Jolly for a 9-4 lead.

The runs were needed - Georgia got a three-run homer from Cam Shepard in the top of the ninth off of Jeremy Beasley that made it 9-7.

The Tigers return to ACC action this weekend, hosting No. 18 Wake Forest in a crucial three-game series that starts Friday. The Demon Deacons are 28-11 overall but are 12-6 in the ACC Atlantic. Clemson is in second place in the standings with a 14-4 record, trailing Louisville (15-3) by one game.

Clemson vs. Georgia boxscore
Get the latest Clemson gear right here!
Comment on this story