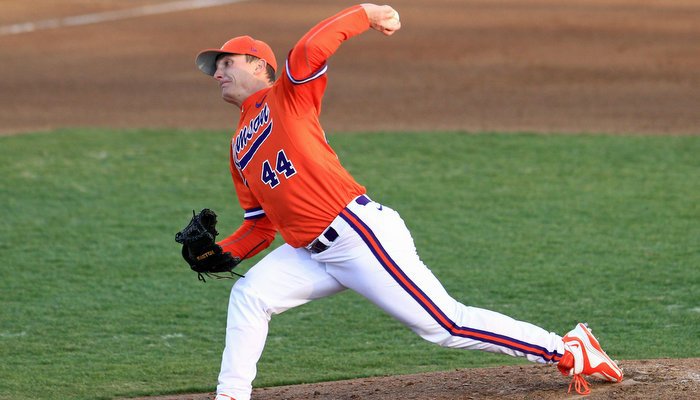 Crownover struck out eight and gave up just three hits

# 0, 0
,
View Full Profile words “Opening Day” evoke images of bright sunshine and warmth, and where there was plenty of sunshine to go around Friday at Doug Kingsmore Stadium, the temperatures were as cold as Clemson’s bats.

Matthew Crownover
Jr. LH Pitcher
#44 6-0, 210
Ringgold, GA
View Full Profile ’s superlative start, and the Moutaineers opened the 2015 season with a 2-0 victory over the Tigers in front of a chilled crowd.

"I thought we pitched really well and played good defense," head coach Jack Leggett said after the game. "Six hits and six walks and we just couldn't take advantage of it. We had a couple of opportunities in the first two or three innings and if we break the ice there, things probably go a lot better for us. They played good defense and their kids pitched well, too. It was a good ballgame. We just needed a few more hits."

Crownover – who was registering his first Friday start – threw 75 pitches in six innings. He sat the first six batters he faced down in order – striking out three – before giving up his first hit in the third inning. The junior lefty faced 21 batters – giving up three hits and no walks, while striking out eight.

"Crownover was really good tonight. He got up around 80 pitches and that's as far as you need to go this early in the season," Leggett said of his Friday starter. "The other guys came in and pitched good but they got a runner and a sacrifice fly and pushed across a runner. We just couldn't get things going. We only had the leadoff runner on three times and that's difficult to turn our offense over and get going."

Leggett said that sending Crownover out for another inning, but the cold made his decision rather easy.

"You're always tempted early in the season," he said. "You may be able to sneak another inning out of him, maybe. It's one of those things that it's cold out here and their kid reached the limit and our kid reached the limit - six innings. We'll have him later in the season when we need him. You definitely don't want to get anybody hurt or push anybody past their limits."

Alex Bostic
So. LH Pitcher
#37 6-2, 215
Matthews, NC
View Full Profile entered the game for Crownover – who had reached is pitch count limit – in the seventh inning and suffered the loss. K.C. Huth reached base on a fielder’s choice and advanced to third on a two-out single by Justin Fox putting runners at the corners. Fox stole second putting two runners in scoring position. Huth scored on a wild pitch and Fox was thrown out at home on the same play, giving West Virginia a 1-0 lead in the seventh inning.

Mountaineers’ starter B.J. Myers had a little bit more of a difficult start to his freshman campaign but successfully navigated the trouble spots. Myers faced 23 batters and gave up four hits and four walks and registered five strikeouts before his night came to an end after five-and-a-half innings due to a pitch count restricition.

Clemson stranded nine runners through the first six innings and only registered one hit – a double by Reed Rohlman in the bottom of the ninth – over the final three innings.

The Tigers and Mountaineers play game two of the three-game series Saturday at 2:30 at Doug Kingsmore. Lefty Zack Erwin